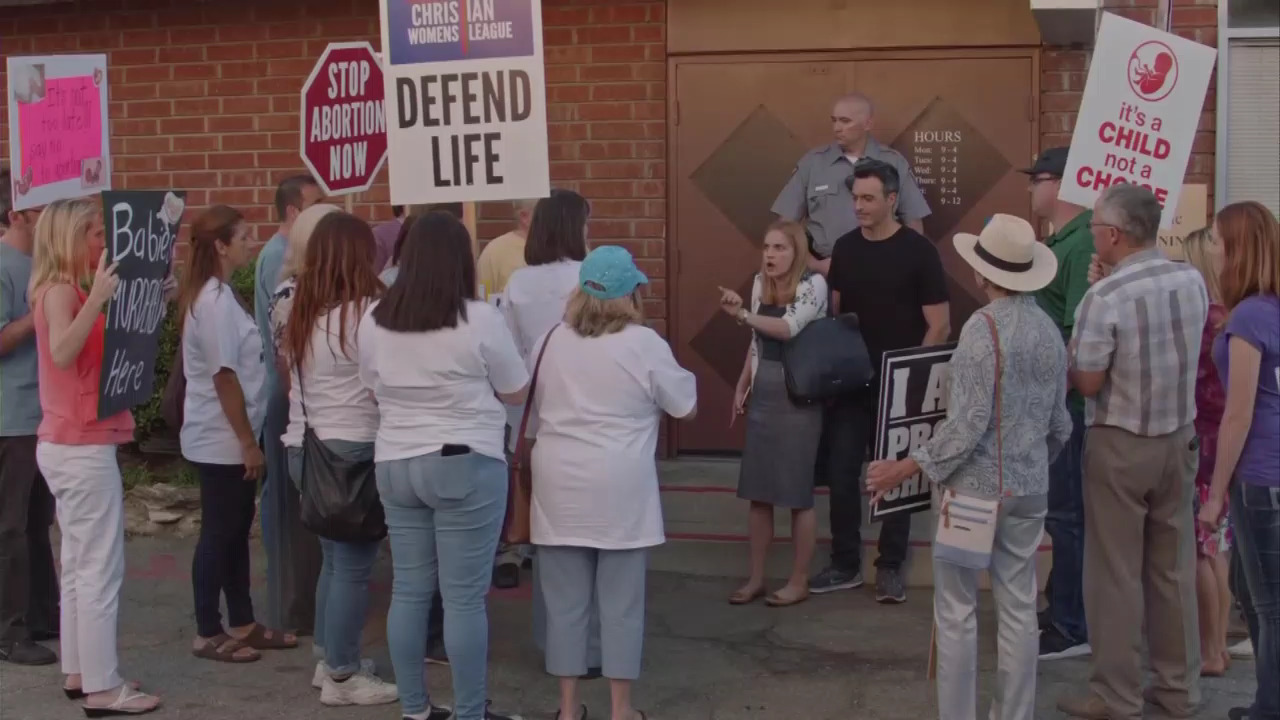 Hollywood and the media always love a pro-abortion storyline on TV and liberals seemed to particularly enjoy a horrifically profane rant against pro-life sidewalk counselors outside an abortion facility on Sunday night.

After one protester quotes Scripture and tells her to “think of the innocent children,” Amy doubles back and calls them all “hypocritical cunts,” among other choice words:

Amy: Oh! You want me to think about the children, you hog-fingering fucks? Well, I did think about this. I considered it, and I cried, and yeah, suck my cock, I even prayed a little, and here I am. So you can back the fuck off, you hypocritical cunts, before I show up to the piss puddle that is your house and protest your husband whacking it to your daughter's seventh grade yearbook. That sign's misspelled. Come on, Dan.

Kevin Fallon of The Daily Beast said the “uproarious outburst” gave Amy the “perfect button on the speech…before breezing into the clinic in triumph.” Promising to go “Inside Veep’s Outrageously Dark Abortion Scene,” Fallon reported that a lot of effort was put into the scene attacking pro-lifers:

Chlumsky worked hard writing and refining the speech with [Showrunner David] Mandel and writer Rachel Axler. “You want to say everything and you want to really get to the heart of stuff, but at the same time you don’t want this to be the writers saying something,” she says… “[It] just scratches the surface of what possibly… most women in that predicament feel.”

“Amy’s rant at the protesters outside the abortion clinic is Selina-level, which is to say it’s fantastic,” Kate Kulzick of the A.V. Club raved, “and Chlumsky’s physicality as Amy’s drugs kick in is fun.”

Once inside the clinic, the abortionist goes over the risks and asks if she wants to see the ultrasound but Amy barks, “Less talk, more abortion.” Jessica Goldstein at Vulture dismissed the informed consent rules – “of course Amy is required by law to, I don’t know, let the technician read Goodnight Moon to her as a reminder of what she won’t be doing in eight months or some other anti-choice bullshit.”

As for how Amy came to decide to abort, Jackie Strause of the Hollywood Reporter noticed how selfish and self-centered Amy was being, although she couched it in terms that hailed it as empowering: “Amy has been putting herself first — for once” and “Amy finally bet on her own intuition and decided to get an abortion.”

Chlumsky disgustingly described the decision as “a motherly moment for [Amy] to realize that, and there’s this beautiful acceptance of finally seeing Dan for who he is. And there's almost an instantaneous acceptance that there are other alternatives for life that might be better.”

Bustle saw the abortion as almost a credit to the couple’s relationship, saying, “Amy's abortion on Veep shows why she and Dan make a great team… Amy and Dan's partnership throughout this episode confirms that when they're both working toward a common goal, things can go swimmingly.”

Only on the radical left is abortion celebrated as motherly, empowering, or teamwork.