Saints and Sinners: Lucifer is Just a 'Bad Boy with a Heart of Gold' 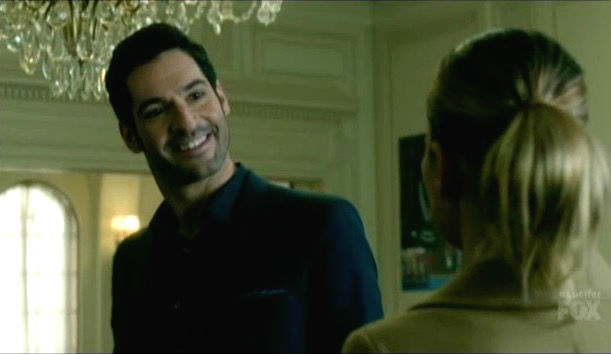 Fox's Lucifer is a show that takes the Biblical concept of Heaven and Hell and turns it on its head. The main character Lucifer Morningstar (Tom Ellis) is literally the devil experiencing life on earth, but outside of Hell he is actually pretty good while his angel brother is very bad outside of Heaven.

In the previous episode, a drunk Detective Chloe Decker (Lauren German) throws herself at Lucifer, but he shocks even himself by declining to take advantage of her. He says he felt a rush by doing that "good deed" and now goes in search of other opportunities to do good so he can feel that high again. Upon finding out that the murder victim of the week was a generous and selfless philanthropist, Lucifer becomes fascinated with emulating his life in an attempt to chase that high.

"The devil gets a terrible rap," Lucifer says, declaring himself a "bad boy with a heart of gold" like the victim. It's a shtick we've seen before on Lucifer, where the story is meant to blur the lines between good and evil, and engender sympathy for the devil. Poor, misunderstood Satan should really be a saint, in this view. In fact, they even go so far as to call him one - in the show and in the episode titled "St. Lucifer."

Kyle: Tim would be devastated to know we've got to cancel the fund-raising gala.

Lucifer: Well, we wouldn't want to devastate our fallen hero. The show must go on.

Chloe: This is an active crime scene. We can't have an event here.

Vanessa: No, that wouldn't be right.

Lucifer: Well, I just happen to own the preeminent party venue in Los Angeles. You can hold your benefit at my club.

Lucifer: No, no, your husband was a kindred spirit, and I pledge to carry on his good work and personally find-- and punish-- his killer.

Lucifer: You are so welcome.

Chloe: If this was a robbery, our perp's gonna want to cash in before the cops get wind of this, so I'll call the local pawn shops... What is with you today?

Lucifer: It was rather benevolent of me, offering up Lux, don't you think?

Chloe: Well, one good deed doesn't make you a saint.

Lucifer: Well, last I counted, it was two good deeds. But, uh, I'm not feeling the same rush as before. Perhaps I'm gonna have to up my game.

Chloe: Whatever you say, St. Lucifer.

So while Lucifer is out there doing good and racking up "saint" points, his angel brother Amenadiel is Hell-bent on sending him back to Hell and goes even further to the dark side in the process. Let's count up the crimes. Amenadiel orchestrated the theft of Lucifer's wings that led to a person being killed. He beat up Lucifer. He saved a human from Hell in exchange for that man promising to kill Lucifer. (In this episode the man tries, but is talked out of pulling the trigger. "My holier-than-thou brother has hired someone to kill me? Well, this really is Opposite Day, isn't it?" says Lucifer.) And new tonight, Amenadiel ends up getting drunk with Lucifer's demon sidekick Maze and having sex with her in the back of a car! They ALWAYS have to show the one who is supposed to be the most Godly as the most hypocritical, don't they?