Jason Whitlock is the king of hot takes, and the latest episode of his new podcast “Fearless” proves just how much we need someone like him in the movement.

His podcast name is definitely a good fit, since leftists love attacking Whitlock for speaking the truth. On July 6, he released the first official episode in which he discussed topics ranging from the “ludicrous” Rachel Nichols controversy, the new George Floyd statues, and the
Chinese Communist Party 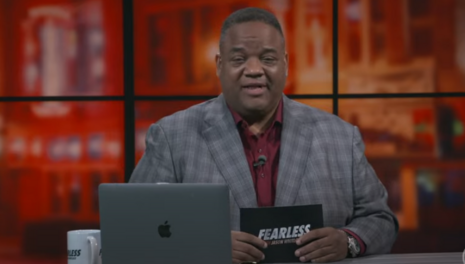 While Whitlock announced the debut of his podcast in early June and released a few short bonus clips last month, Episode 1 was even more fiery than we could've hoped for. He began the show by explaining his 16-year-career at the Kansas City Star and the prejudices that some of his colleagues held against him.

He even told a story about one co-worker who openly disrespected him because of his skin color in the middle of a company meeting, comparing that experience to the current turmoil surrounding Nichols, a white woman who was "caught" on tape telling LeBron James' PR spokesman that she thought she'd been passed up for a position hosting the NBA Finals for ESPN in favor of Maria Taylor, a black woman, just so the network could appear more diverse.

The tape has earned Nichols no shortage of accusations of racism.

“This entire controversy is ludicrous and it feels manufactured,” said Whitlock, accusing Taylor of “playing games" for "leverage."

This is what television networks and television personalities do. They gin up and/or exploit racial dysfunction for ratings, relevance, and in the case of Taylor, contract leverage.

Whitlock also tweeted about the issue:

I just read this entire story. I can't find what Rachel Nichols said that was offensive. Someone please point it out to me. Also, revealing her private conversation with Adam Mendelsohn is a gross violation of their privacy. The NYTimes has Deadspin standards. Sad. https://t.co/4ZdnZBi7Sy

ESPN has since announced that they've pulled Nichols off of the NBA finals as a result of her comments being made public, replacing her with Malika Andrews.

Whitlock’s uncle, who hosts the podcast with him, voiced his opinion on this decision, saying, “Now that’s how you correct racism, by doing some more racist s***."