Strange new religious respect: The formal release of Pope Francis's long-anticipated encyclical on global warming dominated Friday's New York Times, which avidly covered it from both environmental and religious angles -- quite unlike the paper's hostile treatment of the Vatican's stands on abortion and birth control.

Laurie Goodstein's news article made the front page: "In Footsteps of Popes Seeking Worldly Change." Goodstein, the paper's chief religion correspondent, seemed to thoroughly enjoy seeing political conservatives "fuming" about the document's hard critiques of capitalism, just like they did in the bad old unregulated days of capitalism, while breathing not a word about the encyclical's condemnation of abortion: 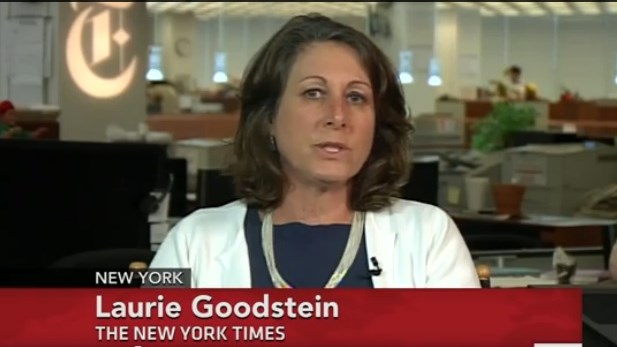 When an elderly Pope Leo XIII released a document in 1891 on the rights of workers to unionize and of owners to hold private property, European capitalists and socialists alike cried foul. Why should we listen, they fumed, to a pope’s pronouncements on economics and politics?

Now, 124 years later, Pope Francis has set off an uproar over his document on the environment and the threat of climate change, an encyclical released Thursday called "Laudato Si' ," or "Praise Be to You: On Care for Our Common Home."

Once again industrialists, politicians and critics are fuming, contending that the pope should stick to religion and stop meddling in matters in which he has no competence.

“Pope Francis’ message on global warming was a confusing distraction that dilutes his great moral authority and leadership at a time when it is desperately needed to combat real -- and present -- crises in the Church and in Western culture,” said Richard A. Viguerie, who pioneered the use of direct-mail fund-raising to help build the political and religious right.

But Francis is following in the footsteps of popes and bishops who, for generations, have written documents on pressing social problems by applying religious teaching to events so contemporary that they seem ripped from their eras’ headlines.

Goodstein certainly sounds like a true believer in her praise for "Praise Be to You."

In “Praise Be to You” Francis puts forward a profoundly theological document, grounded in Catholic teaching, but one in which spiritual and secular matters are knit so closely together that the table of contents promising to segregate them into sections is a bit deceptive.

Throughout the paper, like a recurring chant, Francis intones that everyone and everything is interconnected -- to God, to creation, to fellow human beings.

For some of Francis’ most contentious arguments -- about an economic system that exacerbates inequality and causes environmental degradation -- he cites the words of his predecessors, especially St. John Paul II and Benedict XVI.

He attributes the environmental crisis to wealthier, industrialized countries that extract resources to feed an insatiable desire for consumer goods. Christians also, he said, have been seduced by this consumerism, despite the tradition of monasticism and teachings on simplicity by St. Francis and others.

You know there's something afoot when a secular newspaper favorably cites the Old Testament.

He says that the Bible’s reference to human beings having “dominion” over the earth has been misread by some Christians as giving license to humans to plunder its resources without respect for other living organisms.

Francis notes that in the Book of Deuteronomy, it says that if you come upon a bird’s nest in a tree with a mother sitting upon the eggs, “You shall not take the mother with the young.”

And in Exodus, it says that the Sabbath day of rest is not just for humans, but also so that your ox and the donkey can rest.

Francis seems determined to remind Catholics, at least those in the Americas, that to see nature as a living sibling is not a foreign concept found only in Native American spirituality, but part of their own Catholic tradition.

Goodstein wasn't nearly so respectful of that "Catholic tradition" when it came to the church's traditional ban on contraception, demonstrated in a February 2012 story during the fight over Obamacare rules ordering businesses, including religious institutions, to pay for employees' contraception:

The near-unified front led by the nation’s Roman Catholic bishops to oppose a mandate for employers to cover birth control has now crumbled amid the compromise plan that the Obama administration offered last week to accommodate religious institutions....The uproar threatens to embroil the Catholic church in a bitter election-year political battle while deepening internal rifts within the church. On the one side are traditionalists who believe in upholding Catholic doctrine to the letter, and on the other, modernists who believe the church must respond to changing times and a pluralistic society.

Goodstein even used a bogus statistic as fact to bolster her argument:

Studies have shown that 98 percent of Catholic women have used artificial contraception at some time in their lives....

Goodstein also co-wrote a piece with Jim Francis, selling the papal document as a socialist pamphlet:

Pope Francis on Thursday called for a radical transformation of politics, economics and individual lifestyles to confront environmental degradation and climate change, blending a biting critique of consumerism and irresponsible development with a plea for swift and unified global action.

The Times, which doesn't want to legislate sexual morality (abortion, contraception), apparently has no problem with using the church's moral authority to push stiff environmental regulations.

Even before the encyclical, the pope’s stance against environmental destruction and his demand for global action had already thrilled many scientists. Advocates of policies to combat climate change have said they hoped that Francis could lend a “moral dimension” to the debate.

Only two paragraphs are devoted to "conservative" Catholic critics, including this one:

Many conservatives will be pleased with the encyclical’s strong criticism of abortion, and its dismissal of arguments that population control can be an answer to poverty. However, Francis sharply criticizes the trading of carbon credits -- a market-based system central to the European Union’s climate policy -- and says it “may simply become a ploy which permits maintaining the excessive consumption of some countries and sectors.”

The encyclical on the environment that Pope Francis released on Thursday is as much an indictment of the global economic order as it is an argument for the world to confront climate change.

It offers blistering criticism of 21st-century capitalism, expressing skepticism about market forces, criticizing consumerism and cautioning about the costs of growth.

Naturally, there was also an approving lead editorial.

Activist reporter Justin Gillis triumphantly announced that the "Document Hews Closely to Science on Climate." Did the encyclical's concern and scathing criticism of capitalism go to far? Perhaps not far enough, Gillis responded.

The new papal encyclical on the environment is a ringing call to action, a critique of consumerism and a prophetic warning about the dangers of ignoring what Pope Francis calls “the ecological crisis.”

But amid all his soaring rhetoric, did the pope get the science right?

The short answer from climate and environmental scientists is that he did, at least to the degree possible in a religious document meant for a broad audience. If anything, they say, he may have bent over backward to offer a cautious interpretation of the scientific facts.

For example, a substantial body of published science says human emissions have caused all the global warming that has occurred over the past century....

James Taranto noted the "strange new respect" for The Vatican from the Times today, in his Best of the Web column, making this skewering comment:

So the left isn’t really bowing to papal authority. What they’re doing is the opposite --praising the pope for bowing to the secular “authority” of science.