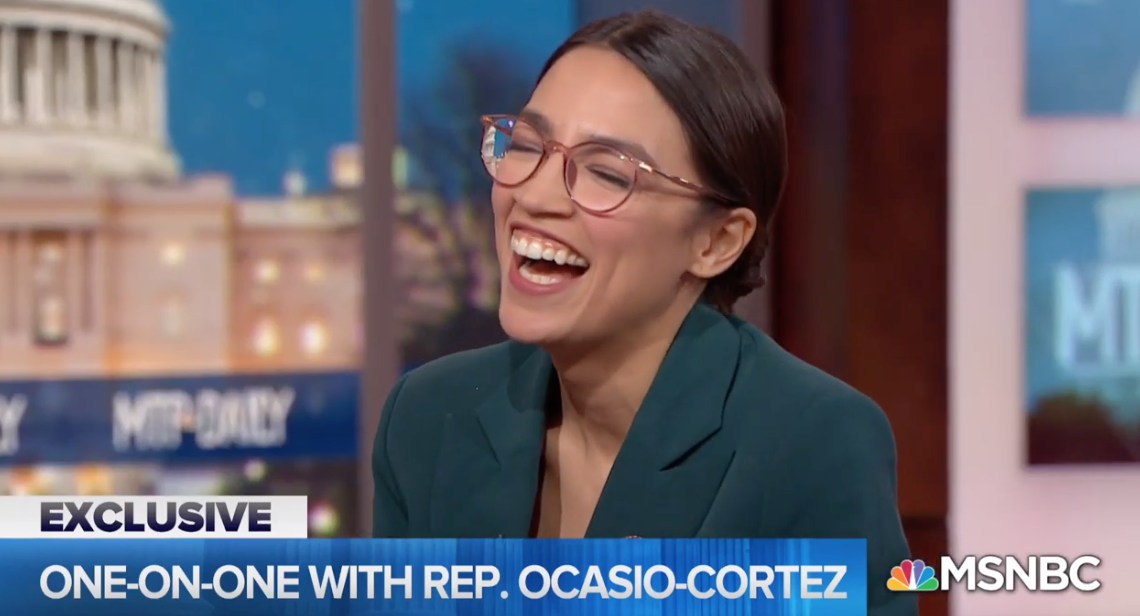 It’s been a week since Rep. Alexandria Ocasio-Cortez, D-N.Y., and Sen. Edward Markey, D-Mass., introduced a “Green New Deal” resolution promising massive government spending and no way to pay for it.

The president and many others mocked it. Liberal presidential candidates endorsed it. An Ocasio-Cortez policy adviser denied to Fox News that the plan promised “economic security for people ‘unwilling to work.’” For the record, it did. Yet, the evening news shows chose not to report on the proposal that some estimated could cost $6.6 trillion a year, likely more.

The radical environmental plan drew applause from the far left and scorn from countless others, but not a word from the networks evening news shows. Between Feb. 7, and Feb. 13, ABC, CBS and NBC evening news programs failed to cover the proposal, even though there was derision, distancing and denials worthy of embarrassment.

Cornell Professor Robert Hockett claimed in a Fox News interview Feb. 8, that the document didn’t include the promise to take care of people “unwilling to work,” or expand high-speed rail so much it would eliminate air travel.

In that interview with Tucker Carlson, Hockett pushed back at the guaranteed income idea telling him, “I think you’re referring to some sort of document that some, I think some doctored document that somebody other than us has been circulating.” Carlson’s staff checked during the interview and confirmed the origin was Ocasio-Cortez’ office and told Hockett, who still insisted Carlson was wrong.

The next day, Hockett said he made a mistake.

“It appears there was more than one document being discussed yesterday, only one of which I had heard about with any definiteness by last evening ... I regret that we seem unknowingly to have ended up speaking about different documents,” Hockett told The Daily Caller on Feb. 9.

The FAQ was so widely mocked, Ocasio-Cortez’ distanced herself and her chief of staff said it was an mistakenly published, unfinished draft. Her office later deleted the document, but it can still be found online elsewhere. Even on NPR’s website.

Ocasio-Cortez also made contradictory remarks about the proposal, according to Fox. On Feb. 7, NPR radio host Steve Inskeep asked “Are you prepared to put on that table that, ‘Yes, actually they’re [conservatives] right, what this requires is massive government intervention?’” She said yes and “I have no problem saying that.”

She had no problem until later that day on MSNBC with Chuck Todd when she complained conservatives were mischaracterizing the Green New Deal as “some kind of massive government takeover.”

The Green New Deal proposal was so extreme even people who want action taken to reduce carbon emissions disputed it. Chief economics commentator Greg Ip wrote in The Wall Street Journal that the “premise” of the Green New Deal “is right.” But by combining it with a government effort to create millions of jobs it becomes “both absurdly expensive and deeply partisan.”

A Bloomberg columnist came up with a “quick, rough cost estimate” of $6.6 trillion a year, and concluded it would “spent the U.S. into oblivion.”

While ABC, CBS and NBC evening news shows were busy ignoring a major story, NBC talk show Meet the Press sought to promote it. Moderator Chuck Todd twisted facts and ignored many ludicrous details of the resolution and supporting documents like the FAQ.