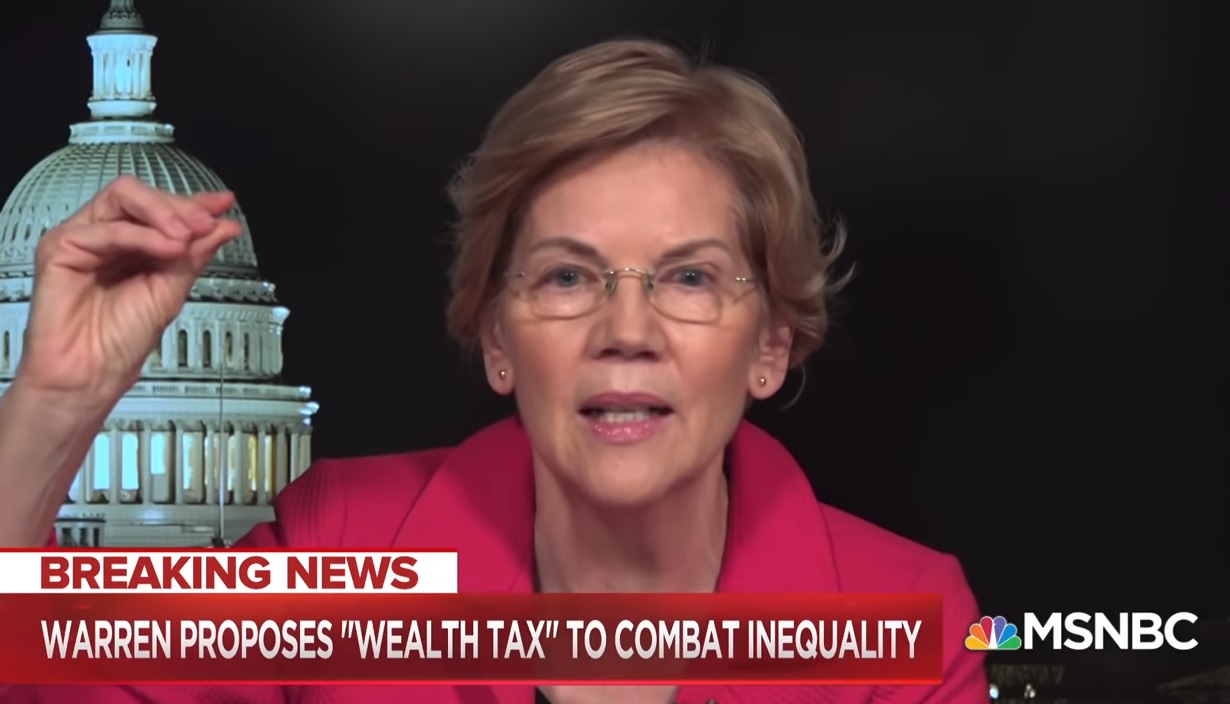 Left? Lefter? Leftist? In the quest to see which candidate can be the most liberal, Democratic presidential candidate Sen. Elizabeth Warren called for an “ultra-millionaire tax” to force the wealthy to fork over more to the government.

Her proposal is not a tax on income, but rather on individuals’ assets. If implemented, anyone with more than $50 million in assets (including property) would face a 2 percent annual wealth tax, higher if they have more than $1 billion in assets. Liberal media promoted and defended it, or turned to liberal economists who would.

Washington Post opinion writer Paul Waldman wrote that it “couldn’t come at a better time” and was “good politics.” A Los Angeles Times columnist opined that it was “constitutional.” CNN anchor Ana Cabrera asked liberal economist Robert Reich on Jan. 27, whether he wants “his party” to support “these significant tax increases for the very rich to reverse the widening wealth gap?” “Absolutely!” he replied.

Online left-wing media outlets including Salon and The Week were even more effusive in their praise. Salon promoted it as “popular,” a “bold policy prescriptive” and The Week argued the policy was morally right. An Axios poll from January 2019, showed 70 percent of Americans want “reform” of the economic system, although that survey question didn’t define “reform.”

“Warren's plan is far from radical. It's mainstream,” Salon wrote after holding up a poll showing a support for higher taxes. “Arriving right on time, Warren’s plan to break up the growing concentration of wealth and power in this country came on the same day that several Trump administration officials offered a series of astonishingly tone-deaf statements dismissing the financial struggle of millions of Americans.”

The Week’s headline blared, “How Elizabeth Warren’s Wealth Tax Could Save America” and later called it “the right idea” and a “net plus” for the economy and “American democracy.” It also preemptively hit back at criticism of the wealth tax writing, “This is not crazy. Taxes on wages and income are common, including taxes on the money people get when they sell assets. Straight-up wealth taxes .... are less common, but not unheard of.”

It defended the idea on “moral” grounds arguing that taking that wealth away from the uber wealthy is morally right. It’s in the same vein as Democratic Socialist Rep. Alexandria Ocasio-Cortez, D-N.Y., rants against the existence of billionaires.

Other media outlets like Yahoo! Finance columnist Rick Newman went easy on Warren, trying not to hit the Democrat’s anti-rich idea it up too hard even while pointing out huge problems (including “Constitutional impediments”).

Newman began by saying “It seems like good politics” and “risks little blowback from ordinary voters,” before sharing three major problems with the proposal.

The idea is radical. As National Review (NR) noted, this would not simply be a huge tax increase. It amounts to “asset-forfeiture,” which the magazine noted “the federal government has no constitutional power to undertake.”

“What Warren is proposing is essentially a federal version of the hated asset-forfeiture programs that have been so much abused by law-enforcement agencies — minus the allegation of criminal misconduct and made universal and annual,” NR columnist Kevin Williamson explained.

Investor’s Business Daily denounced it in an editorial as economic “illiteracy” and a “baby-step toward socialism.” It warned that the wealthy will go on strike — which will reduce economic growth and result in “fewer jobs and lower incomes.”

NR and others pointed out that the Constitution prohibits direct taxes and therefore, could prohibit such a tax. Recognizing that problem, Mother Jones offered variations of how to accomplish roughly the same wealth confiscation without a Supreme Court fight.

Salon rejected the unconstitutionality arguments outright, taking sides siding with some law professors who wrote a letter for Warren claiming her proposal was constitutional. It even tried to make the plan more palatable by saying it was “first proposed by none other than — Donald J. Trump.” (For the record, Salon breezed over the fact the Trump suggestion from many years ago was “one-time” NOT an annual confiscation of wealth).

The left-wing outlet also tried to arm Warren with ways to defeat critics: “Warren can rebut critiques of class warfare by calling out the gaslighting. The class war has already begun.”