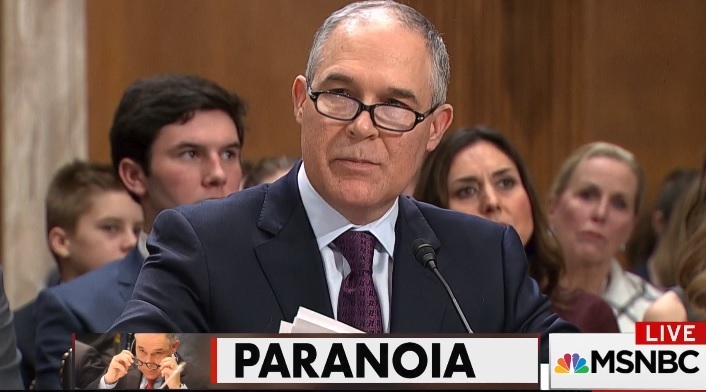 The recent media frenzy over EPA administrator Scott Pruitt’s travel expenses and use of first-class cabins, often lacked crucial information — like the death threats he has received.

According to The Wall Street Journal in November 2017, Pruitt gets five times as many threats as the previous EPA administrator and there had been “explicit death threats.” His family was also threatened. Yet, some media outlets completely ignored the existence of threats as they criticized his travel costs.

The Washington Examiner reported threats were in nearly every form of media, from Twitter posts to mail. One ABC online story quoted the EPA Assistant Inspector General for Investigations who said there were “some very personal, ugly threats.”

Mention of death threats were missing from reports in Vanity Fair, the Los Angeles Times and at least one Associated Press story. Slate and others acknowledged “threats,” without mentioning any had been death threats or providing any indication of how severe or credible the threats were.

That’s a serious omission less than a year after Republicans were shot at a baseball practice simply for being Republicans, and the shooting nearly killed House Majority Whip Steve Scalise.

Vanity Fair portrayed Pruitt as a wimp afraid of “whiny environmentalists,” labeled his reasons an “excuse” to avoid getting cussed out in airports. After an EPA official told Politico Pruitt was being approached and being yelled at “numerous” times in airports, the magazine mocked “Apparently, individuals going up to the E.P.A. administrator and making completely factual statements was a bridge too far.”

Nowhere did Vanity Fair acknowledge that the reason Pruitt has a heavy security detail in the first place was because there had been death threats against him.

The Los Angeles Times wrote a story on Feb. 18, about Pruitt’s “highly secret, on-and-off, official non-visit to Israel.” The paper noted that Pruitt was supposed to visit Israel in January, but did not, as they complained about the lack of details for his visit.

“Those dates came and went, with no Pruitt and no explanation for why he hadn’t arrived, although it coincided with an uproar over his travel expenses and penchant for flying first class,” LA Times reported — without reminding anyone that he’s gotten so many threats he has a 24-hour security detail.

An Associated Press story run by PBS Newshour also failed to mention any threats against Pruitt in an article blasting him for $200,000 on trips for him and his staff in six months of 2017. The figures were obtained by the environmentalist group Environmental Integrity Project. The founder of the group Eric Schaeffer called the trips “a little squirrelly.”

While the article included Pruitt’s rationale of a “toxic environmental politically,” the story also failed to mention the existence of threats against him.

Slate said Pruitt “ought to be accustomed to the criticism of his flight habits,” and downplayed the threats. After admitting he’s gotten more threats than other EPA heads, Slate argued that the EPA spokesman Henry Barnet “didn’t point to these threats when he explained Pruitt’s luxurious flights to Politico.”

The liberal site focused on the quote about people cursing at Pruitt, but ignored another quote from Barnet to Politico: “The [security] team leader felt that he was being placed in a situation where he was unsafe on the flight.”

But in October 2017, The Washington Examiner reported EPA administrator Pruitt told Bloomberg, “The level of protection is dictated by the level of threat” and “The quantity and the volume — as well as the type — of threats are different. What’s really disappointing to me as it’s not just me — it’s family.”