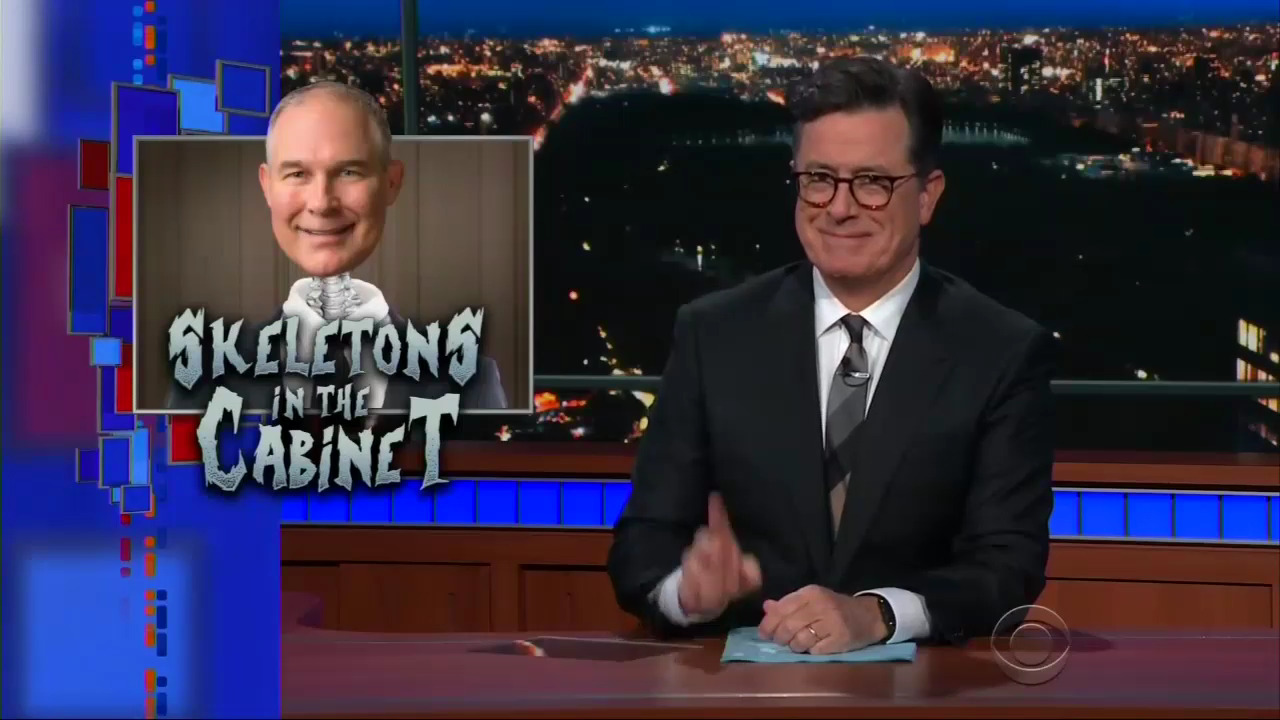 Threats against Trump administration officials have become deadly serious. EPA Administrator Scott Pruitt requested 24/7 security protection back in April and had to beef up his security detail again in October, because of the high number of threats against him and his family.

He is receiving more than five times the threats of his EPA predecessor and some include “explicit death threats,” according to The Wall Street Journal. Left-wing politicians, websites and some media including The Washington Post criticized the cost of Pruitt’s security detail in light of his efforts to cut EPA’s budget. One columnist even attempted to justify the threats while claiming he was not advocating violence.

Given the recent physical assault on Sen. Rand Paul by a neighbor and the shooting of Republican congressmen during baseball practice in June, the news media appear shockingly unconcerned about threats of violence directed at the Cabinet member. At the very least, the media should report the threats. Tell that to ABC, CBS and NBC morning and evening news programs which did not report any threats against Pruitt since he was appointed to head the Environmental Protection Agency in February.

CBS This Morning did bring up Pruitt’s heavy security on Sept. 21, 2017, but only to repeat complaints from The Washington Post that it was keeping “agents from pursuing environmental crimes.” Nowhere in that segment did co-anchor Charlie Rose bother to ask why or acknowledge the threats against Pruitt which prompted higher security needs than other administrations.

Co-anchor Charlie Rose read the headline of this Washington Post story critical of the security levels for the “divisive” Pruitt. Although the Post found fault with the security, it at least acknowledged that the EPA’s Office of the Inspector General said “investigators have opened more cases this fiscal year than in fiscal 2016” and at that time 32 percent were directed at Pruitt. 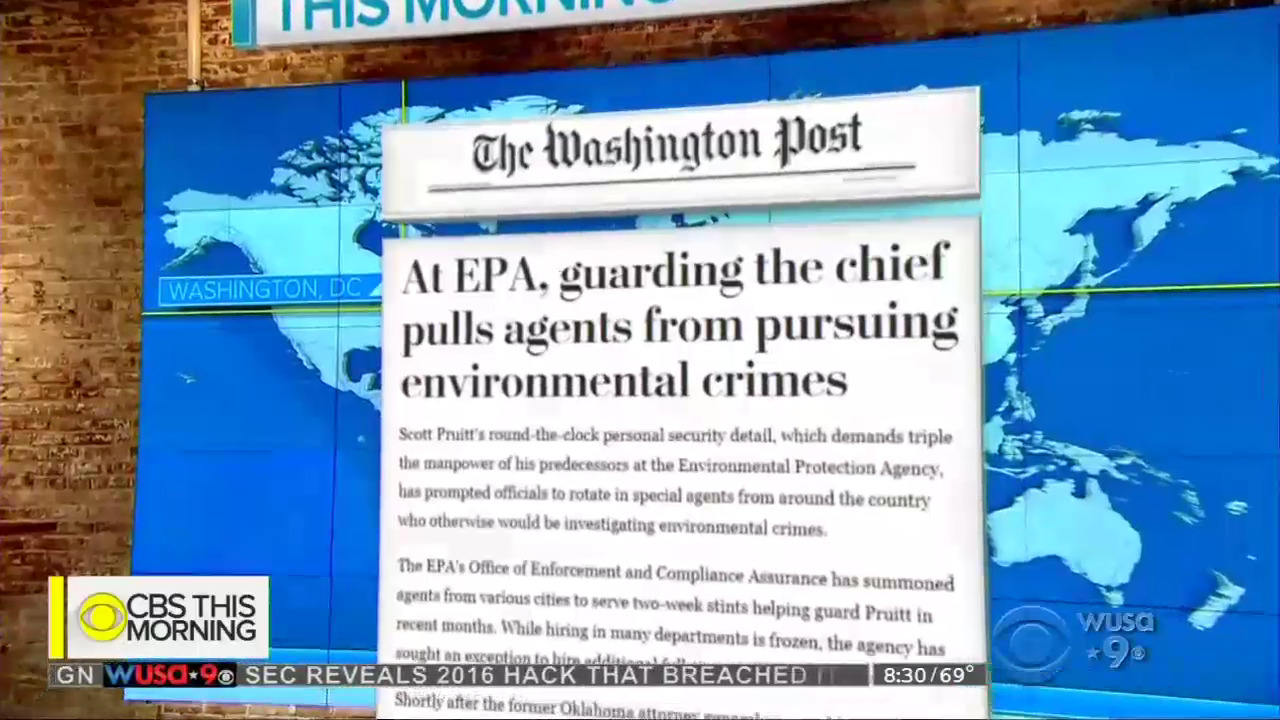 That was more than CBS managed. Rose only read the headline and then said, “Scott Pruitt gets round-the-clock security. It’s prompted officials to bring in special agents from around the country who otherwise would be investigating environmental crime.”

In contrast, CNN reported the death threats on multiple days and shows in October 2017, although most of those stories still attacked Pruitt over his policy goals.

So partisan was disdain for Pruitt, that Reps. Peter DeFazio, D-Oregon, and Grace Napolitano, D-Calif., disregarded those threats and sent a letter demanding an investigation. It said the security measures “constitute potential waste or abuse of taxpayer dollars” and claimed “there is no apparent security threat against the Administrator to justify such a security detail or expenditures.”

The Journal editorial board was one of the few media outlets that condemned the threats rather than the security expenses and Pruitt himself.

“Mr. Pruitt didn’t invent these threats, and Cabinet members shouldn’t have to fear violence as a price of public service. When the federal government protects Cabinet members from those who would harm them for doing their jobs, it is protecting American democracy,” the Journal board argued.

Liberals opposed to Pruitt’s EPA goals, such as budget and staff cuts or ending the Obama administration’s Clean Power Plan, have attacked and mocked Pruitt for having such security in place.

According to his website, Conan joked on April 13, 2017, “After receiving death threats, the head of the EPA Scott Pruitt requested a fleet of round-the-clock bodyguards. Pruitt said, ‘If I’m going to die, I want it to be from good old-fashioned unregulated coal emissions.’”

Stephen Colbert mocked Pruitt on Oct. 25, 2017, joked about the protection saying “since taking office Pruitt has spent more time protecting himself than the environment.”

“[U]nlike previous heads of the EPA, Pruitt is hiring a dozen more agents to work in shifts providing him around-the-clock protection. Over a dozen? To put that into perspective, Eric Trump only has two secret service agents, and that’s just to keep him from choking on loose change.”

Colbert went on to criticize Pruitt’s agency decisions and never acknowledged the “credible” threats of violence against EPA staff — primarily against Pruitt and his family, according to the Wall Street Journal editorial board.

“Some [threats] have referenced Mr. Pruitt’s home address. Federal law enforcement has determined that some of those threatening Mr. Pruitt are likely capable of carrying out acts of violence. EPA security has already caught suspects prowling around the administrator’s neighborhood,” the Journal editorial noted.

Wherever they are coming from, it does make a warped, dangerous sort of sense.

Unless you belong to that literalist, desperately unloved sect of right-wing sycophants who sacrificed all your critical thinking skills at the altar of neo-Nazi, pro-Trump Breitbartism, you surely understand: this is no advocacy for violence. Only the smallest of minds and most unstable of souls would mis-read my words in such a way.

This is but a simple acknowledgement: when you send death threats to the world and all who live on her, the world will, quite naturally, send them right back.