Liberals still sore over Donald Trump’s electoral victory are bashing the president-elect by any means, including through liberal media outlets.

In the latest volley, left-wing Slate and Vanity Fair both attacked Trump for how he’ll hurt the economy and Americans’ finances a day before Trump was scheduled to deliver an economic speech. 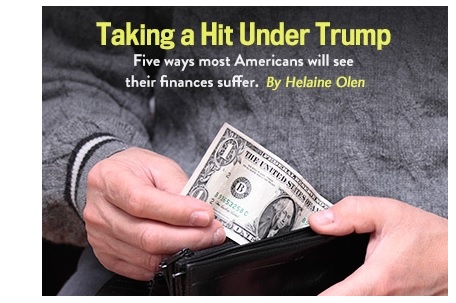 Slate’s Helaine Olen wrote “The Trump Penalty, Five Ways many Americans’ finances will take a hit under the Trump administration” on Dec. 27. One of the five ways she cited was Trump’s claims he will repeal or alter Obamacare. Of course, Olen failed to point out that Obama’s signature health insurance legislation forced people off insurance policies and drove insurance premiums way up — possibly by as much as 49 percent.

The Affordable Care Act also meant fewer hours for some employees, as Ben Casselman noted at the Five Thirty-Eight website in 2015.

Olen also lamented that Trump won’t fulfill the Christmas wish list of the left with in-state “tuition-free” college, increased Social Security benefits for widows and widowers, and help for burdened college students among other things.

Vanity Fair turned to liberal economist Joseph Stiglitz who wrote “A Nobel Laureate Explains How Trump Could Nuke the Economy.” In it, Stiglitz complained about the prospects of tax cuts “for the rich,” greater military spending, tariffs, and removing regulations like Dodd-Frank financial rules.

Stiglitz claimed Trump’s economics are “largely, another dose of Reaganomics” but argued, “ ... for Reagan, things didn’t quite go as planned.” He specifically said that growth slowed, yet during a seven-year recovery under Reagan the U.S. economy grew by nearly one-third, according to Forbes Contributor Peter Ferrara. One year, saw a 6.8 percent rate of growth. Inflation dropped and millions of jobs were created too.

Americans “suffered so much from this [Reaganomics] agenda ...” according to Stiglitz.

Ratter acknowledged that without specifics he couldn’t “thoroughly assess the overall impact,” but went on to conclude that the president-elect’s policies “would confer vast monetary gains on wealthy Americans leaving middle- and working-class Americans — his electoral base — further behind.”

Not that the left worried when Obama left those very same Americans behind during his presidency.