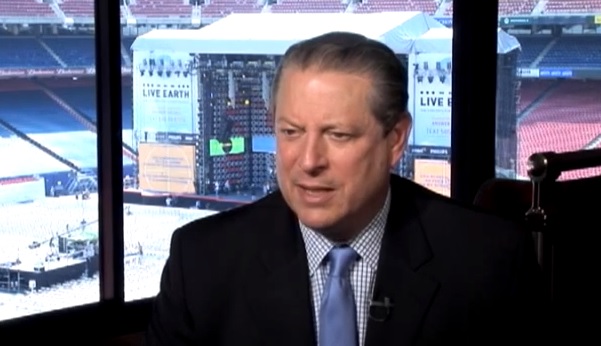 2016 was supposedly the “point of no return” for taking action on global warming, according to former Vice President Al Gore. His tipping point received widespread scorn on the right, resulting in an “Armageddon” clock posted on Rush Limbaugh’s site — that turns zero Jan. 27.

But don’t expect the liberal news media to remind anyone of Gore’s hyperbolic claim 10 years  later.

After all, the media spent those years embracing Gore’s climate agenda, promoting it and him repeatedly. At the same time, they ignored  critics, errors, failed predictions and his hypocrisy. Just as they will likely ignore that Gore’s time is up.

Gore premiered the cinematic version of his global warming apocalypse slideshow, An Inconvenient Truth, at Sundance 10 years ago, on Jan. 24, 2006. A few months later, it went global with a movie theater wide release, making him the “darling of Hollywood” and the liberal news media. That attention helped him win an Oscar and a Nobel Peace Prize.

To the media, he looked like a “genius,” and when Al went to the Oscar’s, NBC Today co-host Meredith Vieira cooed that he was the “coolest guy in the room.”

Reporting from 2006 Sundance Film Festival, the Associated Press wrote, “And politicians and corporations have been ignoring the issue for decades, to the point that unless drastic measures to reduce greenhouse gases are taken within the next 10 years, the world will reach a point of no return, Gore said.”

A Jan. 26, 2006, Washington Post story also confirmed the notion that Gore claimed there were only 10 years to “save the planet from turning into a total frying pan.”

At that time Gore called it “a true planetary emergency.” In a Sundance interview, Gore called it a moral and even a “spiritual” imperative to act on global warming.

“I’m driven by the mission of getting the word out. This is, this is an emergency and it’s hard to convey how serious it is. It’s not a political issue, it’s a moral issue, it’s an ethical issue really a spiritual issue. Are we going to do what’s right for kids and our grandkids?” Gore said at Sundance Film Festival.

For the most part, the liberal media embraced the “environmental evangelist” and his green gospel, rather than criticizing him like they would have an “end-of-the-world” street preacher. Here are five of the worst ways they’ve done that in the past decade:

In the first five years after An Inconvenient Truth was released nationwide, the networks aired 272 stories mentioning Al Gore in connection to climate change, or mentioned that film. Of those reports, almost 98 percent of them had no criticism of the scientific claims he made in the movie  (266 out of 272 stories on the morning and evening news programs).

A British court also ruled  that film's "apocalyptic vision" was "politically partisan and not an impartial analysis of the science of climate change,” and the film couldn’t be shown in schools without a warning that it is not all fact.

Those voices were largely ignored by the media. Instead, some journalists breathlessly wondered if it was too late to conquer climate change. In dialogue fit for an end-of-the-world summer blockbuster, ABC's Bill Weir interrogated one skeptic asking, "Isn't it a moral imperative as a public servant to err on the side of planetary survival?"

In addition to mostly ignoring scientific criticism, Gore's point of view went unopposed in more than 80 percent (222 of 272) of those same stories. Clearly the networks accepted his movie’s claims and what he told them in interviews: "the debate's over."

The liberal media were miserable when Al Gore lost the presidency to George W. Bush, so they were eager to help make the “comeback” possible using the slick cinematic version of his slideshow: An Inconvenient Truth.

Gore’s association with Hollywood producers like Larry David and his wife Laurie gave him a new limelight and the adulation of many in the news media. Suddenly, he was “Al Gore, superstar.”

The broadcast networks in particular had plenty of kind words for Gore since the movie’s 2006 release. The former vice president was called a "high-profile champion" of the environment, the "star of an Oscar-winning documentary," "golden boy of the Oscars" and the "darling of Hollywood" just to name a few.

"Now he looks like a genius when it comes to global warming," Jim Vandehei of Politico told CBS Early Show viewers on Oct. 12, 2007, after Gore was awarded a joint Nobel along with the IPCC.

The morning after the Nobel prize was announced ABC's Good Morning America co-host Diane Sawyer touted the way Gore was "helping awaken the world to global warming" and "educating the world."

Reporter Kate Snow also cheered: "It's been a pretty good year for him. He got an Oscar for his film, An Inconvenient Truth. He won an Emmy for his television channel and now, some might say, the biggest prize of them all: the Nobel Peace Prize."

With Gore’s new-found popularity and “appeal,” the media couldn’t help but speculate about another presidential bid. Some went way beyond speculation. 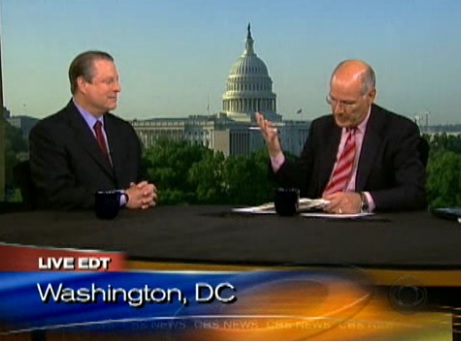 NBC correspondent Anne Thompson called the prospect of Gore running for president "tantalizing" on Oct. 12, 2007, but admitted "few expect [it] to happen."

Her colleague, correspondent John Yang, had high praise for Gore's appeal on May 18, 2008: "Some believe Al Gore would be the perfect choice, a mix of the rock star appeal of Barack Obama and the political experience and money-raising muscle of Hillary Clinton ..."

Meanwhile, CBS’s co-anchor Harry Smith literally couldn't wait for Gore to join the race. On The Early Show May 30, 2007, after a lengthy interview about Gore's book "An Assault on Reason." Smith concluded the interview by bringing up speculation about a run for presidency. Smith even tried to pin a "Gore '08" campaign button on him. When he declined, Smith settled for holding it up on Gore's lapel to "see what it looks like."

The former vice president made a fortune campaigning on the threat of global warming. The former public servant’s net worth stands at $300 million.

In 2013, Gore sold his TV network, Current TV, to Al Jazeera — an international news network partly owned by the Qatari royal family. That nation’s economy is entirely based on oil. Gore stood to make $100 million from the $500 million deal.

But Gore’s 2007 “Live Earth” concerts were perhaps his biggest hypocrisy. While not accomplishing more than “raising awareness” for climate change alarmism, his concerts managed to produce as much carbon emissions as 3,000 residents of the U.K. would produce in a year, according to The Guardian.

The British news outlet even compared the concerts to holding “a hog roast to promote vegetarianism.” Performers at the event flew a combined total of at least 222,000 miles, while the number of cars, planes and other forms of transportation used by attendees undoubtedly far surpassed that.

But The Guardian was one of the few media critics of the event. In fact, NBC Universal partnered to show them on seven of its networks, giving a combined 75 hours of programming to Gore’s global warming crusade.

One theme of Gore’s movie was how manmade global warming would lead to more “extreme” weather events. An Inconvenient Truth, the movie and book, both used the phrase “extreme weather” and linked the hurricanes, floods, drought and other natural disasters to global warming.

The media commonly make the same argument now, and use of the phrase “extreme weather” in news stories exploded in recent years. But before former Vice President Al Gore’s film was released, the broadcast news networks rarely used that language.

Between July 2004 and July 2005, a year before Gore’s movie, the three broadcast networks only used the phrase “extreme weather” in 18 stories on their morning and evening news shows in that entire year. But compare that to July 2013 through July 2014, and the same network news shows talked about it 988 percent more: in a whopping 196 stories. That’s more than enough stories to see one every other day on average.

It’s clear Gore’s claims about “extreme weather,” had an extreme impact on the media coverage.

During 2013 and 2014, extreme weather was frequently used by the networks to describe heat waves, droughts, tornadoes, hurricanes and winter storms, and they often included the phrase in onscreen graphics or chyrons during weather stories. ABC even had an “extreme weather team” dedicated to covering such events. Some of those reports explicitly linked the events to climate change, but even when they didn’t the stories fueled the narrative of climate alarmism.