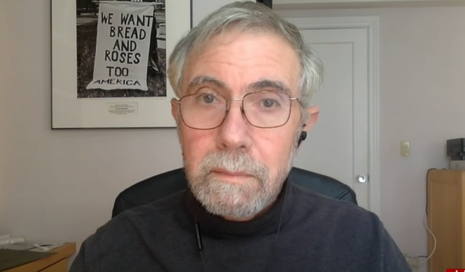 Krugman’s latest op-ed of pro-Biden drivel didn’t make much of an argument. “[W]hile the Biden boom was and is real, has it been good for U.S. workers? Ask many American workers, and they’d probably answer in the negative,” Krugman wrote. “After all, hasn’t inflation eaten up all their wage gains and then some?”

But Krugman then took a nutty shift into pure condescension: “Bidenomics has been good for American workers, whether they know it or not.” That’s some elitist rhetoric coming from a guy who enjoys a $5 million net worth. Those darn plebeians just don’t know what’s good for them, according to Krugman. [Emphasis added.]

Krugman celebrated with glee how “President Biden has presided over a huge employment boom that, according to Friday’s employment report, is still in progress.” Krugman then whipped out a victim card to shield himself. “That’s simply a fact, although stating it (like pointing out that we aren’t in a recession at the moment) guarantees that I will receive a truckload of hate mail,” he screeched.

Krugman even undercut his own point about Biden’s so-called employment boom. “To be fair, many of the job gains under Biden probably reflected a natural recovery from lockdowns, and in general it’s easier to add many jobs when you start, as Biden did, from a position of depressed employment,” the winner of the 2008 Nobel Prize in Economic Sciences babbled. [Emphasis added.]

That’s not a “boom,” Krugman. Even Brownstone Institute President Jeffrey Tucker noted in July that the apparent increase in the employment numbers was a bad sign that the economy is actually forcing people to pick up “second and third jobs.”

But Krugman continued to bloviate how “If we include wage gains due to the rising share of Americans with jobs and the rising number of hours for those employed, the Biden boom has, unambiguously, been good for workers’ incomes.”

But what about the 40-year-high  inflation that’s canceling people’s wage gains?  Krugman had an excuse for that, too, and inadvertently undercut himself again: “Haven’t [workers] seen the purchasing power of their wages fall, thanks to inflation? The answer is yes, but” that “decline reflected events in global food and energy markets, not U.S. policy.”

So none of the energy price inflation had anything to do with Biden leasing “fewer acres for oil-and-gas drilling offshore and on federal land than any other administration in its early stages dating back to the end of World War II,” as the Wall Street Journal reported, right Krugman? What a joke.

Conservatives are under attack. Contact The New York Times at 800-698-4637 and demand it continue to distance itself from Krugman’s awful economic takes.