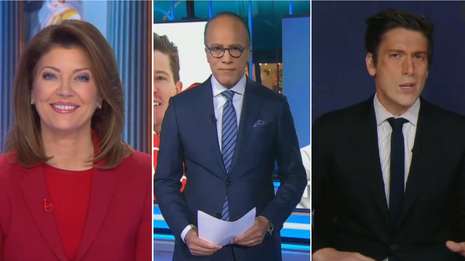 But ABC World News Tonight, CBS Evening News and NBC Nightly News didn’t inform viewers of the Gallup results. All three network shows chose to ignore the entire story during their Feb. 2, Feb. 3, Feb. 4, Feb. 7 and Feb. 8 evening broadcasts as if the survey didn’t exist. Perhaps one reason for the censorship of the news is because this is an election year, and Biden’s abysmal economic performance is set to be on the ballot. Even the liberal Washington Post acknowledged that Biden’s gargantuan $1.9 trillion stimulus bill enacted in March 2021 and his enormous spending “overheated the [economic] recovery.”

The Big Three’s ignorance of the Gallup poll is the latest in an ongoing saga of the evening networks sweeping bad news for Biden under the rug. All three networks recently buried news that the U.S. national debt had topped a whopping $30 trillion for the first time in U.S. history.

The Big Three also blacked out news on Boston Bomber Dzhokhar Tsarnaev receiving a $1,400 COVID-19 relief payment after enactment of Biden’s stimulus. In 2013, Tsarnaev was involved in the detonation of a pair of homemade bombs amidst a crowd watching the Boston Marathon, killing three and injuring more than 260 people. He was originally sentenced to death for his crimes, before the U.S. Court of Appeals for the First Circuit overturned the sentence in 2020.