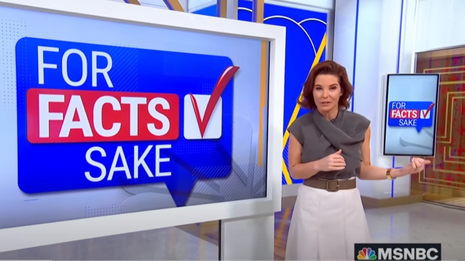 Ruhle claimed during the Nov. 14 edition of NBC’s Sunday Today that “the dirty little secret here, Willie [Geist], while nobody likes to pay more, on average we have the money to do so.” That's easy for her to say, since her net worth currently sits at $6 million, according to Market Realist.

Her condescending comments came just after the Bureau of Labor Statistics reported that inflation hit a 30-year high at 6.2 percent. Fast-forward a little under a month later, on Dec. 8, CNBC released a crushing headline, which completely obliterated Ruhle’s gaslighting: “‘6% inflation is devastating’ to everyday Americans, rising prices need to be curbed, expert says.’” Perhaps NBC and CNBC forgot to coordinate their talking points.

The “expert” cited in CNBC’s reporting was Garcia Hamilton & Associates managing partner Gilbert Garcia. Garcia rebuked the Federal Reserve during the CNBC Financial Advisor Summit Dec. 8 and warned: “I wish we would retire the word ‘transitory.’” In Garcia’s view, “It is pretty clear it is longer than transitory, and it’s much hotter than [the Fed’s] inflationary target.” Then came the sledgehammer that completely upended Ruhle’s arbitrary dismissal of the inflation threat: “Everyday Americans are having a very difficult time with food inflation, which is running very close to 30% and 40%,” Garcia said. “This 6% inflation is devastating,” Garcia analyzed. He continued: “We’ve got to get that inflation back to a more normal, containable level.”

Watch part of Garcia’s warnings to CNBC below:

Americans shouldn’t be surprised by Ruhle’s economic illiteracy. She’s the same person who once tried to sell President Joe Biden and company's initial gargantuan $3.5-trillion budget bill as a “Barbie DreamHouse of improvements to the human condition.”

Conservatives are under attack. Contact NBC News (212) 664-6192 and demand that Ruhle report honestly on the threat of inflation and how it’s devastating to everyday Americans.