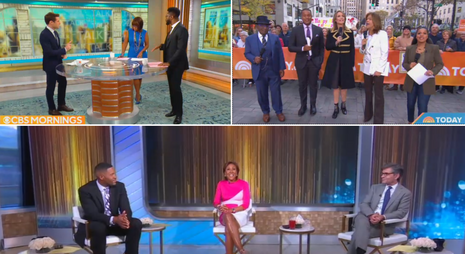 The Bureau of Labor Statistics released another damning report released at 8:30 a.m. Nov. 10 showing that the Consumer Price Index (CPI) skyrocketed a whopping 6.2 percent on a year-over-year basis in October. The increase was “the biggest inflation surge in more than 30 years,” according to CNBC.

The 6.2 percent figure wiped out the 5.9 percent Dow Jones estimate, CNBC said. The price increases “were broad-based in October, with higher costs for new and used autos, energy, furniture, rent and medical care,” according to The Wall Street Journal. Like the derelicts they’ve been, ABC Good Morning America (GMA), CBS Mornings, NBC's Today and 3rd Hour Today all censored the inflation news during their Nov. 10 morning broadcasts.

The Media Research Center created a compilation of clips from Fox Business and conservative radio hosts Mark Levin and Dan Bongino who have been sounding the alarm bells on inflation for months now. The liberal media networks should know that their ongoing censorship of bad economic news is doing nothing to make reality disappear.

NBC's Today was arguably the most ridiculous. It spent 377 seconds of airtime promoting actor Ryan Reynolds and his new movie Red Notice (2021). The segment also included time for co-host Savannah Guthrie fawning how Reynolds was a “heartthrob” for “straight men” on TikTok. Apparently that was more important than the terrible inflation news.

The 9:00 a.m. ET 3rd Hour Today was no better. The show did a 275 second called “Consumer Confidential” with NBC Senior Business Correspondent Stephanie Ruhle talking about things like the costs of different health care plans, without mentioning anything about the CPI spike. Ruhle dismissing the inflation data is ironic because “medical care” is one of the areas that experienced price spikes, according to The Journal.

CBS Mornings spent 300 seconds of coverage talking about rising prices generically making holiday shopping more difficult. Of course, they managed to go the entire segment without saying anything about the BLS data.

Over at GMA, 43 seconds was spent in the minutes after the 8:30 a.m. report drop on fear-mongering the so-called “climate crisis.” Peddling climate fear was apparently more important than informing viewers about the inflation crisis.