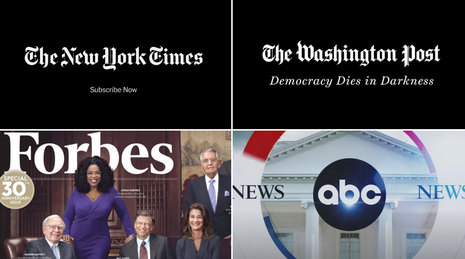 The National Review editorial board reported Oct. 15 that a “provision tucked into the House reconciliation bill would let the Internal Revenue Service peer into the bank account of virtually every American.” It continued: “If passed, the rule would require financial institutions to report the cash flows of every account with more than $600 in deposits or transactions.”

The $600 reporting threshold was later revised up to $10,000 after backlash. Legacy media outlets went berserk and tried to do everything from painting the proposal as reasonable to denying that the news was real news.

The faux-free market publication Forbes magazine attempted to gaslight readers into thinking the IRS going full-on Orwellian was a good thing. It published a piece headlined, “Here’s Why, Actually, The IRS $600 Bank Reporting Proposal Is Entirely Reasonable.” It’s justification was absurd: “[W]ithout wishing to wade into the entirely separate issue of high-income tax cheats — the ‘shadow economy’ in the United States is substantial.”

The Washington Post used one of its phony Pinocchio fact-checks to pretend the IRS targeting bank records was fake news. In a piece headlined, “No, Biden isn’t proposing that the IRS spy on bank records,”  Reporter for The Fact Checker with The Post Salvador Rizzo gave three Pinocchios and quipped: “Nope. The Democrats’ proposal was never that intrusive and now is much more limited. No intimate details about any transactions would be reported.”

National Review, however, slapped that argument right down, suggesting in a piece of its own that the White House was “arguing for a new oversight regime that would gather data on nearly every American on the off chance that a billionaire opens several thousand bank accounts.” National Review senior writer David Harsanyi had the perfect response for Rizzo’s nonsense on Twitter: “Reminder: ‘Factchecking’ is the most dishonest form of opinion journalism.” [Emphasis added.]

Reminder: "Factchecking" is the most dishonest form of opinion journalism. https://t.co/DKoae0yiRd

The New York Times spun the news by saying the provision enabled the IRS to crusade against “tax cheats” in an Oct. 9 piece. It then railed against critics it said “incorrectly suggested that the I.R.S. would be tracking information about individual transactions.” It continued its gaslighting: “The administration has said the I.R.S. would not monitor specific customer transactions but instead use the account information to spot discrepancies between it and what individuals reported on their tax returns.”

But this is a red herring. The Wall Street Journal noted that the IRS planned to target any account “with more than $600 of transactions in a year. So every American with a job could get looked over.” The Journal also said “[a] group of 41 industry groups recently warned congressional leaders that the plan ‘is not remotely targeted’ to detect major tax avoidance.” The Journal called the proposal a “privacy breach waiting to happen.”

ABC News tried to calm readers down by saying only the well-off would see their privacy infringed after the IRS raised its target threshold to $10,000. It argued that the proposal revision would “exempt millions of Americans from the reporting requirement, and help the IRS target wealthier Americans, especially those who earn money from investments, real estate, and other transactions that are more difficult for the IRS to track.”

But as MRC Vice President Dan Gainor tweeted, “[a] $10,000 annual baseline is almost anyone who pays rent or a mortgage in America.”

Yes, it's spying. Even by the Post's lame rationalization. A $10,000 annual baseline is almost anyone who pays rent or a mortgage in America. https://t.co/zLYKoJKBGg