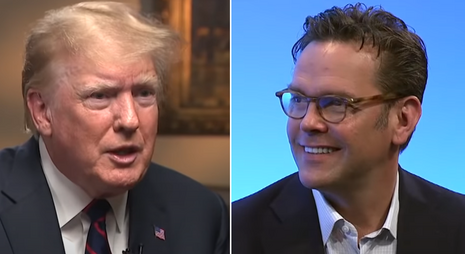 Murdoch — the estranged son of News Corporation Executive Chairman Rupert Murdoch, — funded several equally leftist causes during the 2020 election cycle. His philanthropic organization — Quadrivium Foundation — gave at least $1 million to the Protect Democracy Project (PDP) according to its 2019 990. PDP is the sister organization of the left-wing United to Protect Democracy (UPD). In 2020, PDP filed a lawsuit on behalf of leftist organizations over then-President Trump’s 2020 executive order to investigate Big Tech censorship in an effort to protect the First Amendment rights of Americans. Murdoch’s cash flow into PDP is an endorsement of the insane censorship of speech online by Facebook, Twitter and other Big Tech companies.

PDP claims to be a “nonpartisan” nonprofit dedicated to holding “the President and the Executive Branch accountable to the laws and longstanding practices that have protected our democracy through both Democratic and Republican Administrations.” The group was formed by “former White House and Administration lawyers and experienced constitutional litigators." But research reveals that PDP is anything but nonpartisan. The joint website for PDP and UPD promoted a litany of left-wing arguments, such as making the arbitrary connection between voter ID laws and “voter suppression and race.”

The website even championed the constitutionally dubious H.R. 1 election bill, which Heritage Foundation Senior Legal Fellow Hans von Spakovsky dubbed “‘unconstitutional.’” Spakovsky stated that H.R. 1 “‘imposes federal micromanagement on the states, reversing the local oversight of the election process that our Founders believed was essential to preserving liberty and freedom in America.’”

A 2019 blog published on the joint website was also telling of PDP’s left-wing bent, as it saw the 2016 election of Trump as an “assault” on American values:

[Trump’s] election represented not only a radical change in policy but an assault on what we consider fundamental American values. Going into the 2020 election, many on the left are thinking about the work that the next president and Congress will have to do to repair the damage done since 2016 and address the crises Trump has created and exacerbated.

Murdoch may have had political reasons for funding a group that was openly advocating for the ability of Big Tech to censor Trump. James and his wife Kathryn gave “$20 million to Biden’s campaign, groups supporting him and opposing Trump, and organizations dedicated to disrupting online threats and extremism.” An MRC study published in December found that Twitter in particular had censored Trump and his campaign 543 times since May 31, 2018. Biden and his campaign weren’t censored at all.

PDP’s statement on the lawsuit incorrectly suggested that Trump’s executive order was an attempt to chill the speech of Big Tech companies:

The executive order is designed to chill social media companies from moderating the President’s content or other content in a way that Trump doesn’t like, particularly correcting his false statements about elections.

Parties to the lawsuit were also explicitly left-wing. Common Cause, one of the plaintiffs, urged Congress to pass the controversial H.R. 1 bill. The George Soros-funded Free Press, another plaintiff, attempted last year to get the Federal Communications Commission to label Trump’s coronavirus briefings as “hoaxes.” Rock the Vote Action Fund, the sister organization to a third plaintiff Rock the Vote, said that it is “dedicated to building the political power of young progressives and leveraging that power for action on issues that affect their lives.” President Joe Biden would later rescind Trump’s executive order following pressure from the groups.

The website for the two sister organizations revealed a leftist vendetta against Trump in light of the lawsuit trying to protect Big Tech censorship. The website referred to Trump as a “symptom of political forces that are eroding support for democracy at home and abroad.” PDP must not have realized that America is a republic, not a democracy. It got worse:

Moving forward, the greatest threat to our democracy would be to wipe our hands of the problems that have been exposed in our system, leaving us vulnerable to Trump 2.0: the person watching all of this from the sidelines, recognizing that the American electorate is open to a strongman style of governance, but who is more capable than Trump and will rise in time to implement an autocratic model even more effectively.

Trump’s executive order was intended to ensure that Big Tech companies uphold the First Amendment on their platforms. “The Attorney General shall establish a working group regarding the potential enforcement of State statutes that prohibit online platforms from engaging in unfair or deceptive acts or practices,” the executive order stated.