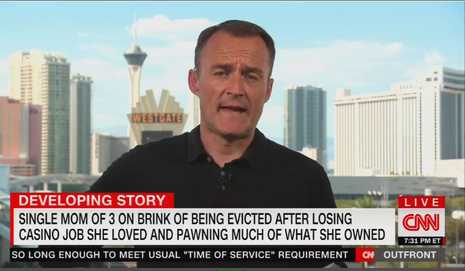 CNN ran a story on the August 2 edition of Erin Burnett OutFront fear-mongering over the moratorium ending by showing alleged “mom” Dasha Kelly on the verge of being evicted from her apartment. CNN correspondent Nick Watt propagandized how “Kelly and her [three] little girls” were served a 24-hour eviction notice to throw them “onto the street.” One chyron for the story read in all-caps: “SINGLE MOM OF 3 ON BRINK OF BEING EVICTED AFTER LOSING CASINO JOB SHE LOVED AND PAWNING MUCH OF WHAT SHE OWNED.”

The network even promoted a GoFundMe page to help her cover the rent. The page was shared on CNN’s social media accounts, according to Fox News. Here’s the problem: CNN later issued a jaw-dropping update to the online version of the story August 9 admitting that Kelly is “not the mother of the three children featured in the story.” That’s a week after the network characterized Kelly as a “single mom.” The fund raised over $210,000. [Emphasis added.]

Watt asked Kelly during the August 2 OutFront segment if the kids “kn[e]w what’s going on.” Kelly responded by giving the impression that the three girls were her kids: “Not really. That’s something I’m afraid of telling them. How do you explain that to your kids, you know what I mean, right?” She continued: “I don’t have any words. I think I’ll just break down crying and just hug them, I guess.” But as CNN’s correction noted: “[T]he children are also cared for by their mother, Shadia Hilo, and their father, David Allison, who is Kelly’s boyfriend.” Kelly only cares for the children in her home for “periods of time,” according to CNN’s correction.

Kelly reportedly justified her comments by alleging that she “originally described herself to CNN as a mother because she considers herself to be like one to them.” CNN apparently didn’t find it necessary to verify whether Kelly’s status as a mother to the three girls was accurate before exploiting it to smear American landlords. Landlords are struggling because of unpaid rent. But CNN seemed only concerned with using terrible journalism to prop up an “unlawful” eviction moratorium.

GoFundMe reportedly notified CNN that “they are in close contact with Kelly and funds will stay on hold until they verify her information. GoFundMe says no funds have been withdrawn.”

The Center for Disease Control would initiate its own order arbitrarily extending the moratorium a day after CNN’s August 2 propaganda segment, in defiance of a U.S. Supreme Court ruling on the matter.

Conservatives are under attack. Contact CNN at 1-(404)-827-1500 and demand it stop promoting unverified stories to push leftist propaganda.