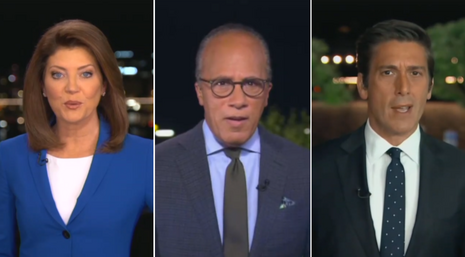 Spiking inflation seems to be the new normal under President Joe Biden’s administration, and the ABC, CBS and NBC evening news continue to protect him from negative coverage.

The Bureau of Labor Statistics (BLS) reported June 15 that the anticipated Producer Price Index (PPI) for final demand in May increased at a whopping 6.6 percent annual pace. The increase was “the largest increase since 12-month data were first calculated in November 2010,” according to BLS. On a monthly basis, the PPI increased 0.8 percent in May. Fox Business reported that “[a]nalysts surveyed by Refinitiv had expected prices to increase 6.3% from a year ago and 0.6% month over month,” indicating the BLS data was worse than expected. The Wall Street Journal said the data added “to inflation pressures bubbling through the U.S. economy.”

Like insects to bug repellent, ABC’s World News Tonight, CBS Evening News and NBC Nightly News all ignored the story during their June 15 broadcasts. The behavior of the evening networks continued a pathetic track record of ignoring damning economic news that could undercut Biden’s agenda.

PNC Financial Services Group senior economist William Adams told The Journal why the PPI data matters so much more in 2021 than in years past:

Businesses are reportedly doing anything they can to stay afloat. The Journal said that “[t]he recent increases in PPI may indicate that businesses are passing on these higher production costs to customers, some of which are translating to higher retail price tags on store shelves across the country.”

The egregious censorship of the inflation news by the Big Three evening networks reveals just how much of a propaganda arm they are for the Biden administration.

The Big Three’s morning network counterparts have proven to be no better.

The BLS reported June 10 that consumer prices had skyrocketed a whopping 5 percent in May on a year-over-year basis for the biggest surge in inflation in nearly 13 years. ABC’s Good Morning America, CBS This Morning and NBC Today all ignored the story during their June 10 broadcasts.