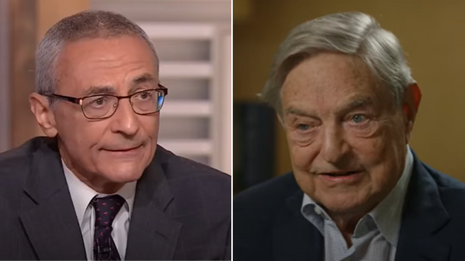 Politico’s story, headlined “John Podesta’s got a message for Joe Biden: Drop the Republicans,” was laced with left-wing agitprop. “[Leftist groups] are sounding the alarms that compromising with Republicans on a scaled-down infrastructure bill — and spending the time that such a deal might require — could make it increasingly difficult to pass the rest of Biden’s sweeping agenda,” Politico wrote. The letter, which was also addressed to Senate Majority Leader Chuck Schumer (D-NY) and House Speaker Nancy Pelosi (D-CA), pressed:  “[W]e urge you to swiftly pass legislation that invests at least $4 trillion throughout the economy over this presidential term, bound by high-road labor, equity and climate standards.”

Podesta slapped down any effort to negotiate with the GOP and joined other liberals in reportedly advocating for a “budget reconciliation” procedure to bypass a Republican filibuster. “But [talking] only works for so long. The clock is ticking. Would we rather just do one big package for reconciliation? You bet,” Podesta reportedly told Politico.

Politico never directly mentioned Podesta’s ties to Soros. Instead, Politico propagandized how Podesta’s “words carry weight among Democrats.” The outlet further spewed how “[t]he pressure from progressives underscores the diverging coalition the White House must contend with if it is to move Biden’s ambitious infrastructure proposal over the goal line.”

The letter’s vision of “infrastructure” was just an alphabet soup of leftist ideas. The following extremist quote was omitted by Politico:

Not once did Politico mention that the nation is currently dealing with spiking inflation due to the previous stimulus package Biden already shot into the economy. In fact, CNBC reported yesterday that “[i]nflation accelerated at its fastest pace since 2008 last month.” Specifically, CNBC showed the Consumer Price Index “spiking 4.2% from a year ago, compared to the Dow Jones estimate for a 3.6% increase.” Also, Politico never mentioned how Biden’s stimulus could have been the possible culprit behind April’s terrible Bureau of Labor Statistics jobs report. It showed that the U.S. economy only added 266,000 jobs last month.

Focusing on inflation and abysmal job growth would have undercut Politico’s arguments.

Conservatives are under attack. Contact Politico at 703-647-7999 and demand it stops being an echo chamber for the extreme left’s propaganda.