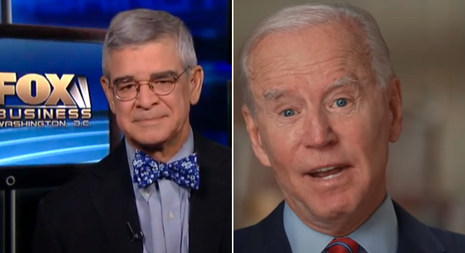 A top economist sounded the alarm on the damage President Joe Biden’s Marxist plans will inflict on the economy.

Morici decried how Biden is trying to arbitrarily “reprogram American capitalism and culture to address alleged sexism, structural racism and climate change.” Morici didn’t hold back: “Economic policy has become a playpen for the woke Gestapo.”

Morici noted that “[s]ocial efficacy is subjective — what criteria should central banks and private lenders use to assess a race-neutral or transgender-friendly workplace?” In his estimation, Morici said that Biden’s massive influx of “woke” into economic policy “is leading to terrible investment choices.”

But it’s not as if many academics can afford to be bold in calling out the Biden administration’s Marxist mentality. Morici noted how “Biden enables by his silence the cancel culture in the media and the jackboot thought control in teaching and research at American universities.”

Morici documented some of the “terrible investment choices” Biden plans to force the U.S. into implementing:

He promises to cut CO2 emissions in half by 2030, but Mr. Biden can’t quickly enable private investors to build out charging stations that would permit intercity travel in electric vehicles. Left to their own devices, automakers would calibrate the transition from gas-power to EVs to emerging charging infrastructure but by subcontracting federal auto emissions standards to California’s zealous regulators, Mr. Biden will impose a Golden State utility meltdown — not enough electricity where motorists and truckers need it and sometimes no power at all — along the interstate.

“Forcing homeowners to convert to electric heat would raise annual household costs more than $4,000 a year in the Northeast,” Morici said. He noted that with median household incomes in the state of Maine at about $60,000, Biden’s plans wouldn’t allow much room after mortgages and rent, taxes and essentials for “travel, to buy a few luxuries or even take in a movie.”

In addition, Morici excoriated how “[t]he Fed buying all those bonds to suppress interest rates and make federal borrowing cheap is creating zombie companies — cheap loans for enterprises with few prospects for turning a profit over the business cycle.”

Morici gave a dire prediction for the American economy: “Growth will stall, Americans White and Black, straight and gay will fight over a diminished future and that’s the stuff that ignites revolutions.”