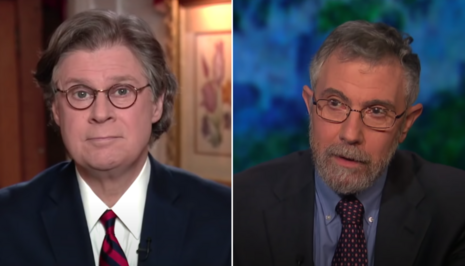 In his Dec. 1 Daily Memo, York ripped apart Krugman’s latest commentary propagandizing that former Vice President Joe Biden will be “the first modern U.S. president trying to govern in the face of an opposition that refuses to accept his legitimacy.” As York summarized: “Krugman seemed to anticipate that some would respond that some Democrats refused to accept Donald Trump's legitimacy. But that never happened, Krugman claimed. ‘And no, Democrats never said Donald Trump was illegitimate,’ he wrote, ‘just that he was incompetent and dangerous.’"

York then went for the jugular: “Does anyone at The New York Times read Krugman's column before it's published?” His memo was headlined to take a shot at Krugman: “A New York Times Embarrassment.” Ouch.

“Of course some Democrats said Trump was illegitimate. Hillary Clinton said so last year. ‘He [Trump] knows he's an illegitimate president,’ Clinton told CBS's ‘60 Minutes’ on September 29, 2019,” York wrote. “Then there was Rep. John Lewis. On January 13, 2017, a week before Trump took the oath of office, the late Democratic icon said of Trump, ‘I don't see this president-elect as a legitimate president.’”

York then whipped out commentary from none other than Krugman himself saying the very thing he said Democrats were “never” saying about Trump’s legitimacy as president.

Among those taking part in that discussion was...Paul Krugman. ‘Let's ask whether Mr. Lewis was right to say what he said,’ Krugman wrote in the Times on January 16, 2017. ‘Is it OK, morally and politically, to declare the man about to move into the White House illegitimate? Yes, it is. In fact, it's an act of patriotism.’

Biden himself couldn’t escape from York’s criticism: “In May, 2019, at a campaign event in New Hampshire, a woman told candidate Joe Biden that Trump was ‘an illegitimate president, in my mind...he's illegitimate.’ Biden responded, ‘Look, folks, I absolutely agree.’ He jokingly asked if she would be his running mate.” [Emphasis added.]

The attempt to throw it all down the memory hole is more than just an embarrassment for Krugman and [T]he New York Times. It also encourages a sense of grievance — They won't accept Biden's legitimacy! — that is utterly ignorant of recent events. Some Democrats not only declared Donald Trump an illegitimate president before he was even sworn in -- they spent the next years trying to remove him from office, abusing the powers of investigation in the hope that even if he survived he would be so weakened that he could not win re-election. No one should forget -- or ignore -- what happened.

Conservatives are under attack. Contact The New York Times at 800-698-4637 and demand it correct Krugman’s falsehoods that Democrats “never” said Trump’s presidency was illegitimate.