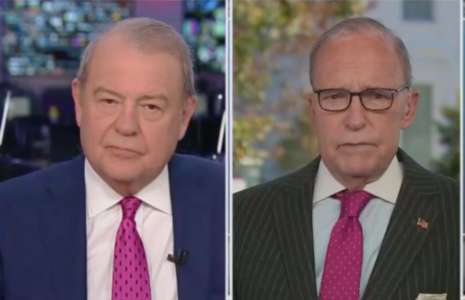 During the Election Day edition of Fox Business’s Varney & Co., host Stuart Varney told Kudlow that “[w]e’ve got restaurants in Chicago closing down. We got some curfews in Massachusetts. We’re adding some restrictions on economic activity in various parts of the country. Do you think that affects the economy’s performance in November and December?”

Kudlow was adamant that “another shutdown is not going to work.” Kudlow continued:

We did what we did last winter. We’re in a different place today. We have vastly better equipment, much more knowledge and experience. We know how to do targeting. That’s the key point.” Kudlow reiterated his opposition to the idea of crippling the economy again with another arbitrary shutdown: 'Closing down the economy again is a bad idea.'

To be sure, Kudlow was sure to emphasize “safety first. Yes.” However, he concluded that “closing down” will make the “cure worse than the problem.” According to Kudlow, “The president said that continuously in recent weeks. I totally agree. I think most Americans completely agree.”