MSNBC has already proven that its ability to do math is suspect. Turns out, its on-air talent may understand little about business loans too. 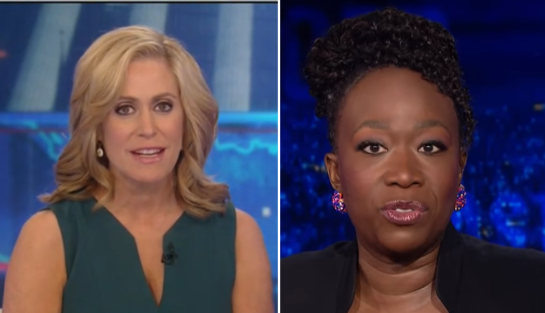 MSNBC’s Joy Reid sent out a flippant tweet in an attempt to denigrate the Trump administration’s plan to direct the Small Business Administration to provide liquidity to states and small business owners through low-interest loans to provide economic relief from the coronavirus impact. Reid stated, “Who knew low-interest business loans were the key to stopping the coronavirus spread?” [Emphasis added.]

Fox Business's Melissa Francis let Reid have it: “Have you ever been responsible for making payroll, ever? You[‘re] so right. There’s no reason to worry about the restaurant on the corner being able to actually pay the waitress at the end of the week.” [Emphasis added.]

The purpose of President Trump’s proposal was to provide “a $50 billion relief package to small business owners affected by the coronavirus outbreak as part of sweeping efforts to hinder the economic impact of the growing pandemic,” according to Fox Business March 11. 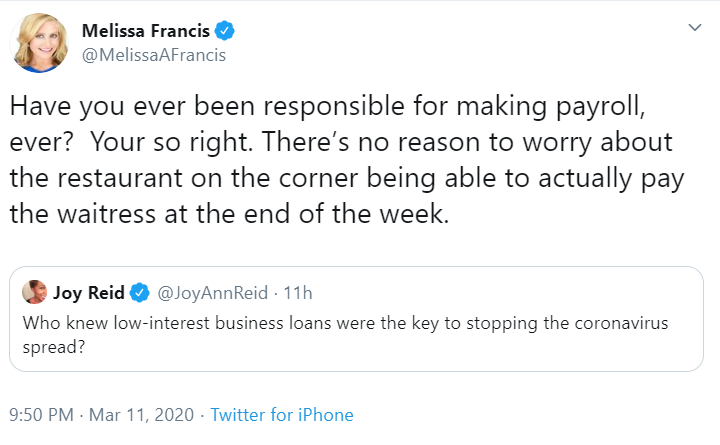 “He called for deferments on tax payments for businesses and individuals affected by coronavirus without interest or penalties, as well as immediate payroll tax relief for U.S. companies.”

Apparently, for Reid, none of this relief package matters since it doesn’t serve MSNBC’s agenda to dunk on the president no matter what. This is the same Reid who recently compared Trump to DC Comics’ Joker. She stated Feb. 10:

“I sort of likened him [Trump] to Joker in Batman. That Joker’s whole life is about hating Batman [Obama] because Batman is everything he can never be.”

Reid’s tweet seems to be a trend for Reid’s coverage of the coronavirus issue. She spent an hour on live TV March 11, pushing propaganda against the Trump administration’s response to the coronavirus. She accused Trump of “tossing it [coronavirus] off as a political hoax.” But, as Washington Examiner's Eddie Scarry noted March 1, “The president, of course, never called the virus a hoax.”

But Reid stressed that same point throughout her segment: “Yeah and believe that it's real. Like, don’t believe that it’s a hoax, even if an official in, let’s say, government tells you.”

Reid continued her blathering, saying that “the coronavirus crisis is once again laying b[are] Donald Trump's glaring inadequacies as President.”