MSNBC Live with Stephanie Ruhle boosted Warren’s so-called “economic patriotism” plan on July 18, but ignored that creepy insult. Nor did they discuss whether private equity firms are actually villains or being misrepresented by Warren.

MSNBC anchor Stephanie Ruhle was practically grinning as she announced that Warren, whom she called “the candidate with a plan for everything,” was “out with another one, this time aimed at a very familiar target: Wall Street.” 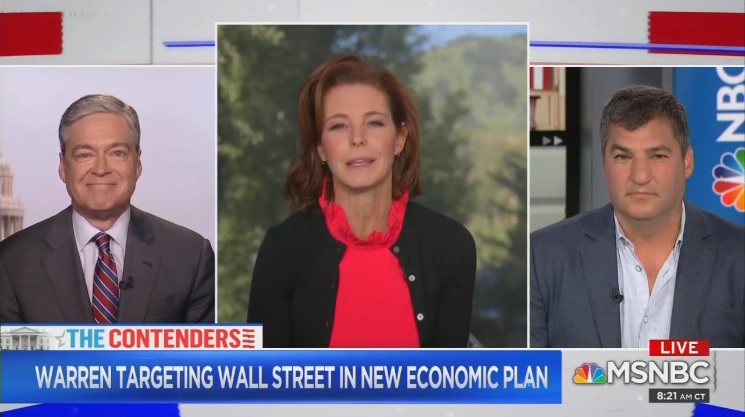 According to Bloomberg, Warren attacked private equity firms for acting like “vampires” when they acquire companies by “bleeding the company dry and walking away enriched even as the company succumbs.” She attacked Wall Street for “looting the economy” and accused Washington of “boosting” it up at the cost of struggling families nationwide.

This, after Bloomberg just about two weeks earlier pitched her as an “acceptable alternative" for Wall Streeters to vote for in 2020.

On MSNBC Live, Ruhle quoted Warren, who said her plan would “rein in the financial industry so it stops sucking money out of the rest of the economy.” Ruhle didn’t use all of Warren’s words though — skipping the “vampires” smear against private equity companies which were also maligned by the media in 2012.

She brought on liberal CNBC editor-at-large John Harwood to break down Warren’s regulatory proposals. Delivering that info from Warren’s perspective, Harwood described her efforts as “laying out plans to tell average Americans I have a way to restructure the American economy to benefit you and prevent people at the top from sucking money out.”

Risk Reversal Advisors principal Dan Nathan also joined the discussion, but was less enamored with her campaign approach. “I think taking on Wall Street, reintroducing things like Glass-Steagall, I don’t think that’s a great way to get a bunch of momentum on a populist, economic message,” he said.

Ruhle pushed back on Nathan’s pessimism, arguing that Warren’s brand was “anti-Wall Street,” and therefore consistent. Nathan didn’t give in, calling these just “catchy headlines right now” and arguing if she wants to win the Democratic nomination she’ll need to “move this economic plan more towards the center.”

Later, she asked if Warren was a better candidate for Wall Street than Democratic socialist Sen. Bernie Sanders (I-VT), or “does it matter at a time when the president is painting anyone with a progressive agenda as a far-left socialist.”

Nathan said she was “very much more favorable than Bernie Sanders.”

He admitted that “there is a lot of stuff on the far left that really spooks a lot of Americans,” but rather than criticize those ideas he argued that candidates should put out “radical” ideas now and then move “some of this” towards the center.

To close the segment, Ruhle did Warren another favor by issuing viewers a “reminder.”

“There is only one candidate running who calls himself a democratic socialist. That is Bernie Sanders. Elizabeth Warren says she’s a capitalist for good business,” she said.

“If they [a private equity firm] are going to make money they have to make the companies successful and more valuable and that means you can’t ‘strip mine’ it. You can’t tear stuff off,” because you won’t have a profitable company left to sell afterwards.

Blaydon also told the MRC back then that many investors in private equity firms are public pension funds. The goal is to make companies profitable and sell them later for a profit.

“In all likelihood they are adding jobs. But another way of doing this is to invest in and take control of a company that is not performing well and is not as profitable as it should be,” he explained. In such cases, job losses can happen in order to make a company more efficient so that it can survive in the globally competitive environment we live in.