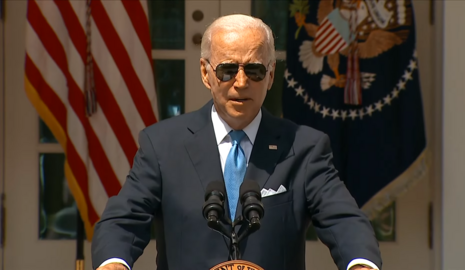 The Associated Press (AP), Business Insider, Newsweek and a select coterie of out-of-touch columnists from The Washington Post and The New York Times seem to have achieved hive mind, declaring in unison that while the United States may experience two quarters of negative GDP growth — which meets the practical definition of recession — that does not mean a recession is imminent.

The outlets all regurgitated the June 21 White House talking points in some form, saying “it is unlikely that the decline in GDP in the first quarter of this year—even if followed by another GDP decline in the second quarter—indicates a recession.”

However, he harrumphed that “there will be a lot of breathless commentary to the effect that we’re officially in a recession. But we won’t be.” Krugman even took to Twitter to promote his new column. “Ignore the two-quarter rule,” Krugman tweeted. “We might have a recession, but we aren't in one now.”

Ignore the two-quarter rule. We might have a recession, but we aren't in one now https://t.co/48qpo9uoQL

This is the same guy who admitted he screwed up by calling inflation “transitory.”

Washington Post columnist Allan Sloan followed in Krugman’s footsteps with this doozy of an op-ed, headlined “Recession experts don’t think we are in one and neither do I.”

Sloan echoed Krugman’s economic doublespeak: “[I]t seems certain that after adjusting for inflation, the GDP will show negative growth. That would be the second straight quarter that ‘real GDP’ — GDP adjusted for inflation — is negative. And to lots of people, including many of my media colleagues, two straight quarters of negative real GDP growth means we’re in a recession.” However, according to Sloan’s spin, that doesn’t matter because “the job market is strong and so are other key indicators.”

Sloan delivered the punchline in the fourth paragraph. “[R]egardless of the GDP number that we see Thursday, I don’t think we’re in a recession now, and we may end up being lucky enough not to have one at all.”

Newsweek attempted to shield the White House from criticism in a recent 1,675-word fact-check claiming: “The White House website did not change its definition of what a recession is, as it never had one to begin with.”

Newsweek went even further, saying that “regardless of one's views on the current situation, it is a far cry to say the White House has reinvented the definition of recession, when there is no consensus among experts and authorities about what exactly a recession constitutes, and whether the U.S. is in one already."

They slapped opponents of the Biden administration’s hair-splitting on the core meaning of the word “recession” with a “False” rating.

Even Business Insider backed up Newsweek’s bogus fact-check with a July 26 story headlined, “No the White House isn’t changing the definition of a recession.”

AP News joined the chorus of leftists in denial of economic reality with a July 27 story cheekily headlined: “EXPLAINER: How do we know when a recession has begun?” AP reporter Christopher Rugaber claimed: “By one common definition, the U.S. economy is on the cusp of a recession. Yet that definition isn’t the one that counts.”

Conservatives are under attack. Want to help expose liberal media bias? Contact The New York Times at 800-698-4637, The Washington Post at 800-477-4679, Newsweek at support@newsweekgroup.com, The Associated Press at 212-621-1500 and Business Insider CEO Henry Blodget at hblodget@insider.com and demand those outlets report honestly on the Biden administration’s responsibility for the economic downturn.