Republican lawmakers are finally standing their ground and fighting back against woke bureaucrats who leverage government power to make traditional energy more expensive, according to Fox Business. 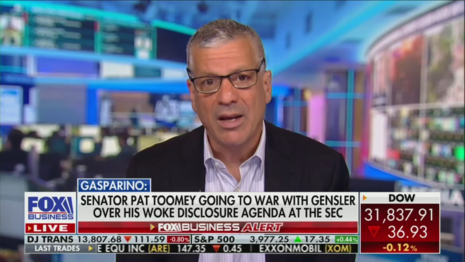 Public Enemy No. 1 in this battle, according to Fox Business, is Securities and Exchange Commission Chair Gary Gensler. A green extremist, Gensler led the way in advancing woke environmental, social and governance (ESG) standards in President Joe Biden’s administration. Senate Banking Committee Republicans fired off a July 21 letter to Gensler that rebuked the former Goldman Sachs banker for proposing to restrict fossil fuels during an energy crisis.

“We are troubled by the Securities and Exchange Commission’s (SEC) lack of transparency and disregard for a significant congressional oversight request concerning the SEC’s proposed climate disclosure rule—a sweeping new regulation that will harm consumers, workers, and the entire U.S. economy at a time when energy prices are skyrocketing,” [emphasis added.]

“If the Republicans take the Senate, and, you know, the House as well, you’re gonna see a full assault, from what I understand, on Gary Gensler,” Fox Business senior correspondent Charlie Gasparino said on July 21. “I mean, it is game on. They see a lot of mileage in Gary Gensler and going after his woke policies. And they’ve been given some interesting, I guess, ammunition, recently from the Supreme Court.”

Gensler has vast influence over the stock market and financial sector in his capacity as chair of the SEC. Under his leadership, the agency proposed a 490-page, dystopian rule that would mandate that businesses report on their “climate-related risks” and “greenhouse gas emissions.”

While extensive, Gensler’s authority is not unlimited. Gasparino explained that conservative groups like the Job Creators Network “are planning to use” a recent Supreme Court decision “to possibly sue Gary Gensler” and push back against his alleged abuse of governmental power.

That decision, West Virginia v. EPA, delivered a major victory against the ESG movement by scaling back the EPA’s ability “to impose strict environmental regulations,” Gasparino said. Most of the EPA’s regulations, Gasparino added, are not “for an agency to impose. It’s for Congress to pass an act. And the default must be Congress passes [legislation], not the agency.”

The Republican Committee members expressed frustration with a previous letter from Gensler, calling his response “wholly inadequate and unacceptable.” The SEC chair’s July 12 letter answered zero of the Republicans’ questions and included absolutely no records, according to committee Republicans.

MRC Business has pioneered the anti-ESG, pro-freedom movement. As the Utah state Treasurer told MRCB, “There are a lot of projects in the United States — profitable projects in the oil and gas industry — that are not being funded because of ESGs. And that's preventing the market” from rebalancing.
Conservatives are under attack. Contact ABC News at 818-460-7477, CBS News at 212-975-3247 and NBC News at 212-664-6192 and demand they hold Biden and his cronies accountable for attempting to restrict fossil fuel production during an energy crisis.