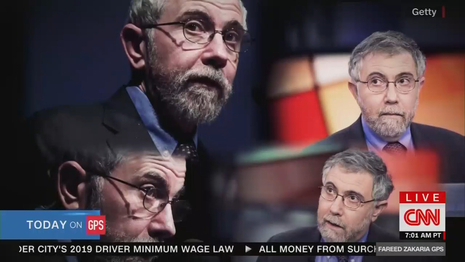 In his Dec. 2, opinion piece “Wonking Out: When Should We Declare Victory Over Inflation?” Krugman tried to convince Americans they should be happy enough in their current financial standing to rejoice about a presupposed end to inflation that “hasn’t happened yet” but may occur in the “not-too-distant future.”

The only problem with that is that the Consumer Price Index for October was 7.7 percent, which is a whopping 5.7 percent above the Federal Reserve’s 2 percent target for inflation.

Still, Krugman blathered, there are “hard decisions” ahead for “when to declare victory.”

“Put on your statistical noise-canceling headphones, and the sound you hear is that of falling underlying inflation,” he pontificated. “Even Jerome Powell, the Federal Reserve chair, said in effect as much in his speech Wednesday.”

Why would we put on “statistical noise-canceling headphones,” anyway? It’s as if Krugman is just telling people to cover their ears and ignore the alarms.

Without those headphones on, you may hear the sound of a dump truck unloading Americans’ hard-earned, inflated dollars into their gas tanks, Krugman. Even the Soros-funded Project Syndicate released a Dec. 2 column by New York University Professor Emeritus of Economics Nouriel Roubini projecting “unavoidable” global economic disaster.

Krugman even acknowledged that the federal government’s November jobs report – which showed the economy added 263,000 jobs last month – doesn’t bode well for inflation, before contradicting the entire point of his column.

“Until this morning, it looked as if wages were slowing, but some of the old data have been revised up and the latest number was high,” he wrote. “So a big decline in inflation may be a way off.”

Does that sound like America is anywhere close to  declaring “victory”?

A real Krugman kicker came in the 10th paragraph. He argued that the Fed’s target was to blame for the ongoing inflation struggle, not the out-of-control money-printing that spurred the inflation crisis in the first place:

“As it happens, a number of economists, myself included, have long argued that the 2 percent target is too low. This isn’t a radical position; many of the advocates of a 3 or even 4 percent target are as mainstream as they get.”

So, if we move the goalposts closer to the current inflation rate, we can give the Biden administration a participation prize for any paltry ebb in inflation. Got it, Krugman.

Krugman said several times during  President Joe Biden’s tenure  that inflation would be “transitory” or “temporary.” He later admitted he was wrong about his awful inflation takes in a July 2022 op-ed after inflation had spiked 9.1 percent year-over-year for a 40-year high a month earlier.

Krugman should revisit his summer self-reflections.

Conservatives are under attack. Contact The New York Times at 800-698-4637 and demand it distance itself from Krugman’s awful inflation predictions.