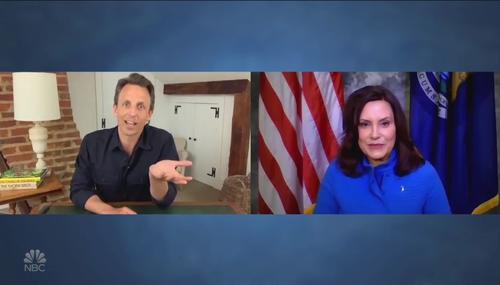 Kristine Marsh
May 19th, 2020 11:43 AM
Controversial governor of Michigan and Joe Biden VP shortlist pick Gretchen Whitmer went on NBC’s Late Night early Tuesday for yet another friendly, softball interview from her adoring media fans. Even though her constituents have been protesting her stringent lockdown for over a month now, host Seth Meyers tried to portray the Democrat as some kind of populist icon, admiring her “rapper name”… 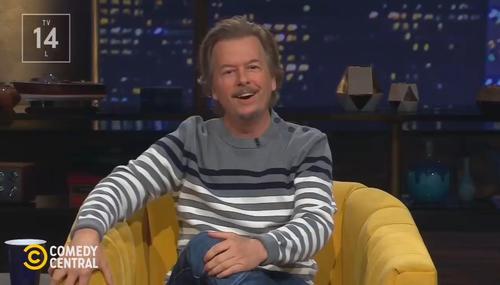 Randy Hall
April 7th, 2020 10:00 AM
The coronavirus pandemic has claimed another victim: the Lights Out With David Spade weeknight program on Comedy Central. Spade's show was a rarity: A late night comedy show not fixated on bashing Donald Trump and Republicans. The show featured host Spade and a revolving panel of guests discussing pop culture news. It stopped production on March 12, joining hundreds of other shows in shutting… 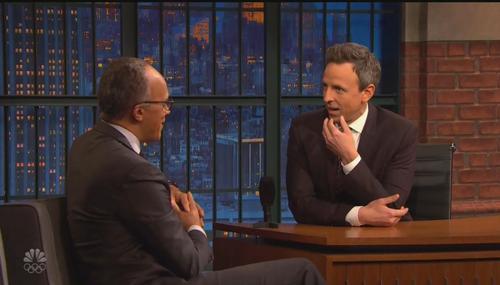 Aiden Jackson
January 29th, 2020 1:30 PM
“Smoking gun” has become a buzz phrase in the liberal lexicon throughout the Trump presidency. The term is utilized by the lefty media on a continuous loop whenever there is a “revelation” brought forth that has the potential to damage President Trump. Seth Meyers on Tuesday's Late Night, aired early Wednesday morning, invoked the oft-repeated phrase during an interview with NBC Nightly News… 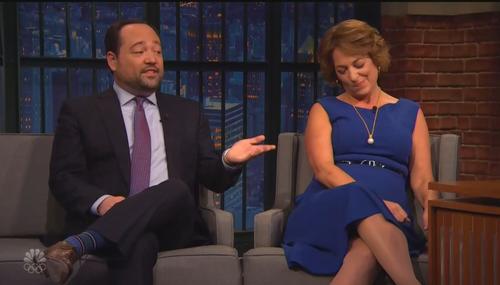 Aiden Jackson
January 23rd, 2020 1:28 PM
The publication of a vitriolic book against President Trump has become a rite of passage for a card-holding member of the leftist media elite. Washington Post reporters’ Carol Leonnig and Phillip Rucker are the latest to join in the not-so-exclusive club of anti-Trump, press credentialed authors. The two appeared on Wednesday’s Late Night with Seth Meyers, aired early Thursday morning, to discuss… 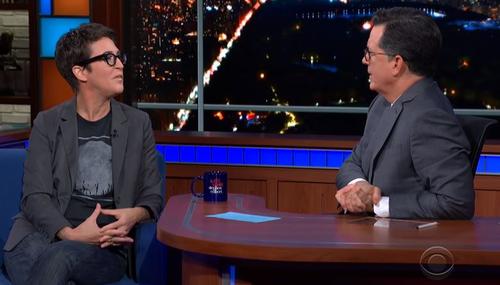 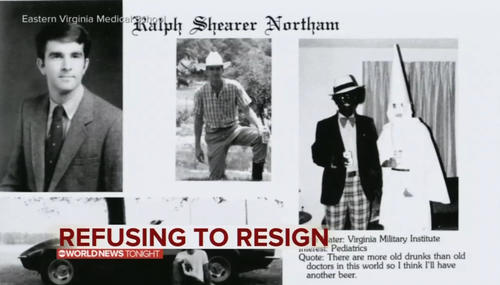 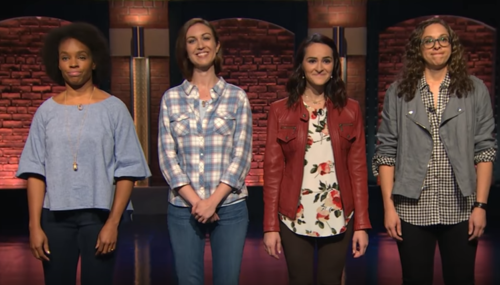 Culture
Madeleine Post
July 27th, 2017 3:09 PM
Remember when late night TV shows were supposed to be funny and entertaining? No more. Late Night With Seth Meyers writers filed on stage July 26 to recite a collective attack against the President Trump and his daughter, Ivanka. And of course, the liberal media – from HuffPost to Rolling Stone joined in their ‘group troll.’ 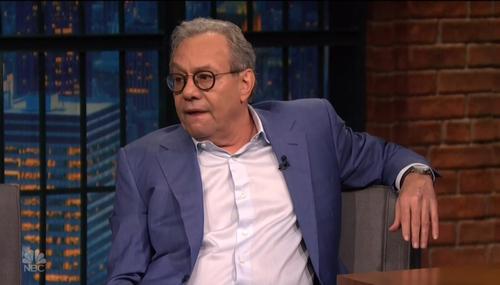 Comedian Lewis Black Has a Harsh Message for Trump Supporters

Kristine Marsh
September 15th, 2016 10:32 AM
On Wednesday night’s Late Night with Seth Meyers, actor, comedian, and former Daily Show regular Lewis Black came on the show to discuss the 2016 election. Prompted by his liberal host to express his “message” to Trump supporters, Black bluntly said they were going to hell. “I'm saying this as a friend. If you vote for Donald Trump, you’re gonna go to hell,” Black stated frankly. After the… 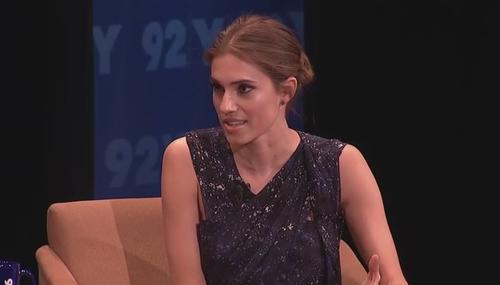 Curtis Houck
February 19th, 2015 2:42 AM
Hours after it was reported by The New York Observer that HBO star Allison Williams would not be addressing the situation surrounding her father and suspended NBC Nightly News anchor Brian Williams at a Michael Kors event on Wednesday night, Williams reversed course hours later and responded to questions during a Q&A at New York’s 92Y. According to the New York Post, Williams told event… 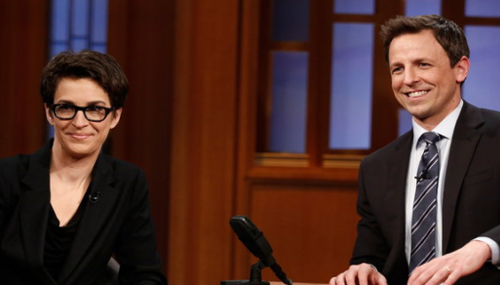 Randy Hall
October 17th, 2014 5:26 PM
While a guest on Thursday's edition of NBC's Late Night With Seth Meyers, Rachel Maddow complained that she's disappointed with the Democrats' “weird strategic move” of avoiding contact with president Barack Obama and his signature legislation during the midterm election campaigns. After stating that the odds are usually stacked against the president's party during midterm elections, the host of… 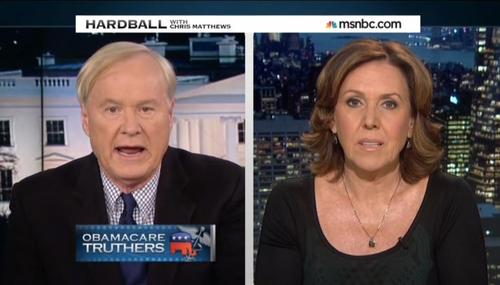 Randy Hall
April 3rd, 2014 6:53 PM
Longtime NBC sportscaster Bob Costas appeared on Wednesday's edition of the network's hour-long Late Night program, which is hosted by Seth Myers. The former member of the Saturday Night Live cast threw softball questions at his guest regarding “minor controversies” he caused by inserting liberal political commentary into his sports coverage. After a discussion that included the TV… 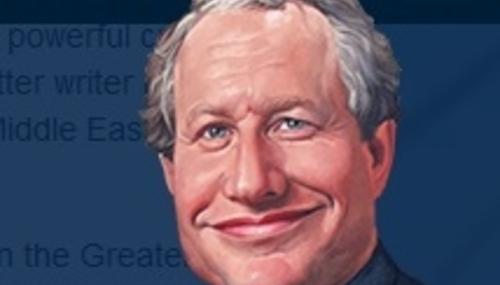 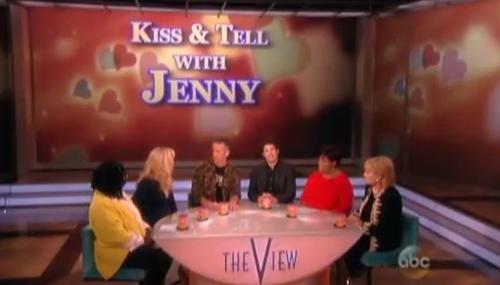 Kyle Drennen
October 7th, 2013 3:53 PM
On Monday, the hosts of NBC's Today eagerly played clips of Saturday Night Live bashing Republicans over the government shutdown. In the morning show's 7 a.m. ET half hour, fill-in co-host Tamron Hall played a clip of SNL host Miley Cyrus doing a parody music video blaming the GOP for the shutdown and gushed: "I think she [Cyrus] might become a member of the five-timers club. You know, the group…