Hollywood collectively assumed Special Counsel Robert Mueller would prove President Donald Trump colluded with Russian agents to steal the 2016 presidential election from Hillary Clinton. Even worse, Trump did everything he could to obstruct the fight to learn the truth. Saturday Night Live made Mueller a recurring character, brought to life by arch Trump critic Robert De Niro. The Trump presidency, the show declared, was on borrowed time.

By Melissa Mullins | July 29, 2016 4:44 AM EDT
Liberal celebrities get overwrought at Democratic conventions, but The Daily Beast exaggerated it even further. Asawan Suebsaeng wrote an article on Sigourney Weaver’s convention speech with the headline “Sigourney Weaver at DNC 2016: Donald Trump Will Kill Planet Earth.”
There’s only one problem. Weaver never said it, and it’s nowhere in the article.

In an interview with Meet the Press moderator David Gregory for the Sunday show's web-based feature Press Pass, Political Animals star Sigourney Weaver explained her support for President Obama: "...the Democrats are always going to be about what the people need. And the Republicans are much more serving big business, and I don't think we can afford to serve big business for another four years with Mr. Romney." [Listen to the audio or watch the video after the jump]

Weaver prefaced her slanted observation by admitting: "I'm not a professional politician, so forgive me if it's very simplistic." Gregory encouraged Weaver to discuss her liberal leanings, as he wondered: "What about President Obama? You've been supportive of him, you say you'd be supportive again. And I know that you told Politico that once a president gets a second term, the gloves come off and that a lot of us have sort of been waiting for that."

Appearing on Tuesday's NBC Today to promote her new USA series Political Animals, actress Sigourney Weaver admitted that her character, a former first lady turned secretary of state, was based in part on Hillary Clinton: "Elaine Barrish Hammond is this very gifted politician with a very strong moral compass....we are inspired by Mrs. Clinton, who's such a remarkable woman and a great secretary of state. She was a great senator for New York State." [Listen to the audio or watch the video after the jump]

Sigourney Weaver Was a 'Stop The War' Elf In a Treehouse?

When Time's Belinda Luscombe asked "Ten Questions" of actress Sigourney Weaver, it became clear they were going to discuss liberal activism as well as her Hillary-clone role on USA's Political Animals miniseries.

It started with this: "Which Secretary of State do you think would make the best actor?" Weaver replied: "Probably all of them. I think James Baker is a very interesting character. I'd rather see him as an actor than as Secretary of State." Then they turned to the Vietnam era:

If you're like me, you've been waiting for feminist claims that global warming is harder on women and therefore should be a greater concern to the public. 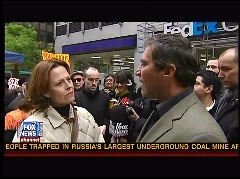 Fox News Channel's Craig Rivera, on Sunday's Geraldo At Large, in a shipboard interview from the Gulf of Mexico, actually asked a conservationist if the oil spill there was a real world equivalent of the fictional disaster seen in the recent James Cameron blockbuster as he pressed: "Do you see what's happening in the oil industry and offshore drilling comparable or some kind of parallel to, like, the movie Avatar?"

After Steiner theorized: "It certainly could be," Rivera then made the following hard transition to an interview with Avatar star Sigourney Weaver: "Although the fight Sigourney Weaver and director James Cameron are waging to protect the rights of the indigenous people of the Amazon from a huge hydroelectric plant is a world away from the situation in the gulf oil spill, the principle is the same - protecting the planet from those interested in only quick profits." Rivera then aired a clip of Weaver boasting that Avatar showed the world "how concerned people are about our planet." [video below the fold]

The following is an excerpt from the Craig Rivera piece as it was aired on the May 9 edition of Geraldo At Large: