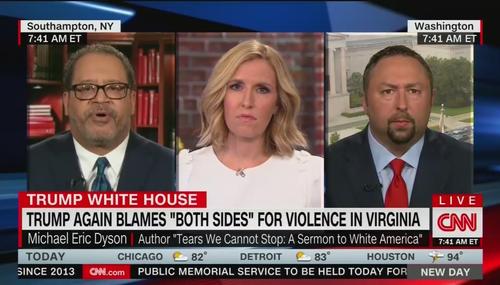 Kristine Marsh
August 16th, 2017 2:11 PM
While CNN is gung-ho in its relentless coverage and criticism of Tuesday’s press conference, the network’s apparently not as interested in correcting its liberal guests less than accurate characterizations of violent left-wing groups. 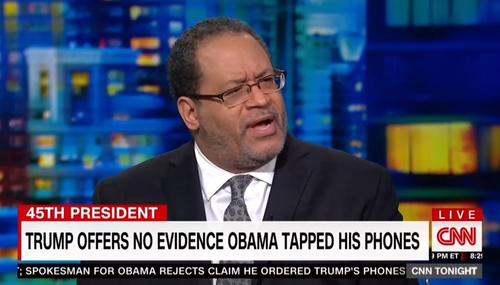 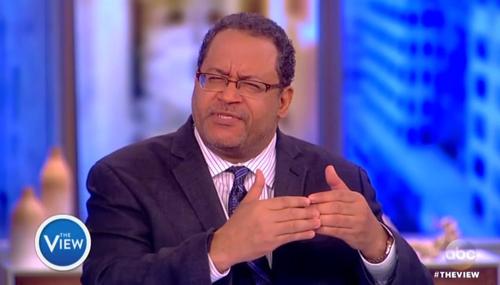 Dyson Rants About White Privilege on The View to Captivated Panel

Kristine Marsh
February 1st, 2017 3:15 PM
Georgetown professor and contributor to the New York Times Michael Eric Dyson appeared on Wednesday’s The View to promote his new book, Tears We Cannot Stop: A Sermon to White America. ABC gave the former MSNBC analyst plenty of time to talk about his favorite topic: racist white Americans. Dyson called out President Trump in particular as the “manifestation” of white America’s “refusal to grow… 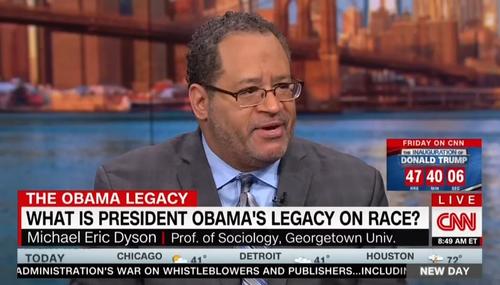 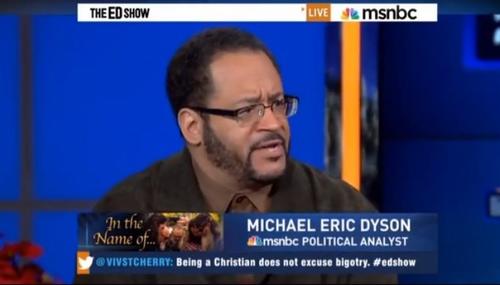 Tim Graham
January 8th, 2017 5:49 PM
Former MSNBC analyst and current New York Times contributor Michael Eric Dyson is drawing attention in top newspapers on Sunday for his new book Tears We Cannot Stop: A Sermon to White America. Carlos Lozada, nonfiction book critic for The Washington Post, even found a way to summarize how inflammatory nonsense could be stuffed into the book. 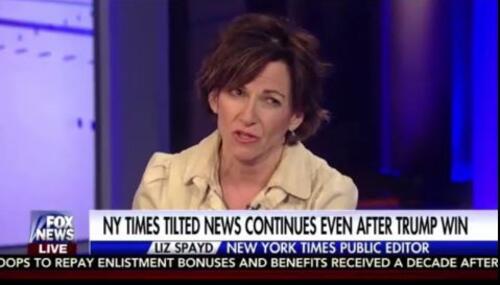 Clay Waters
December 19th, 2016 3:02 PM
Continuing “Sore Loser Sunday” in the New York Times, the Sunday Review fans fears of Trump in its selection of outside essays, often with a racial angle. But then the paper’s new Public Editor had to ruin the self-righteous love-in by noting that when it comes to racial diversity, the Times, with its "newsroom's blinding whiteness," fails to practice what it preaches. 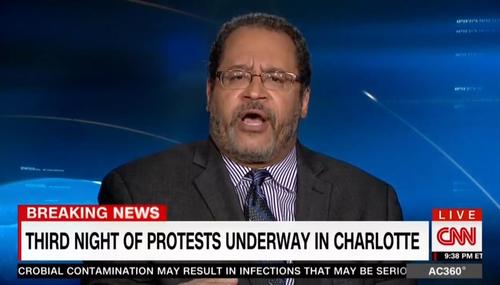 On CNN, Dyson: 'Police Are Manifestation of Terror Against Black Life'

Brad Wilmouth
September 23rd, 2016 12:57 PM
Appearing as a guest on Thursday's Anderson Cooper 360 on CNN for a discussion of recent high-profile police shootings in which the suspect killed was black, Georgetown University Professor and former MSNBC political analyst MIchael Eric Dyson at one point asserted that "the police are the manifestation of terror against black life" which he claimed "has been rendered vulnerable and disposable in… 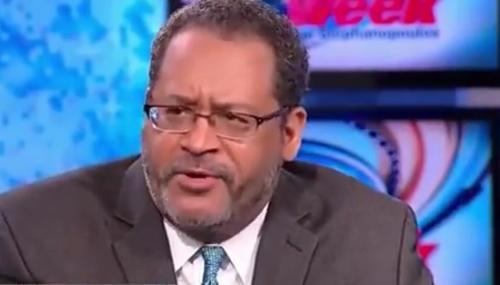 Dyson to ESPN: Colin Kaepernick Is 'Best Kind of American There Is’

Culture
Bruce Bookter
September 6th, 2016 11:16 PM
ESPN’s The Undefeated invited Georgetown Sociology Professor and frequent MSNBC guest Michael Eric Dyson to write an article on Colin Kaepernick. Because, after all, what the heck is the difference between ESPN, Georgetown Professors, and MSNBC anyway? 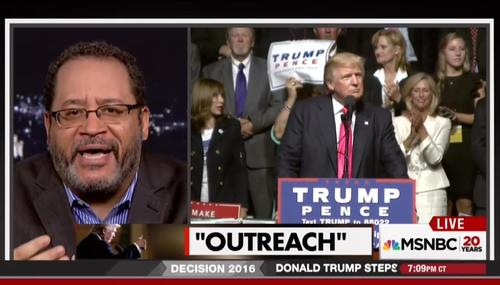 Brad Wilmouth
August 25th, 2016 10:46 PM
Appearing as a guest on Wednesday's All In with Chris Hayes on MSNBC, Georgetown University professor and former MSNBC political analyst Michael Eric Dyson was the latest liberal to claim that a general slogan like "Make America Great Again" really has a racist "code" of "white nationalism" as he claimed that even a generic reference to the "nation" of America implies "whiteness" "by default." 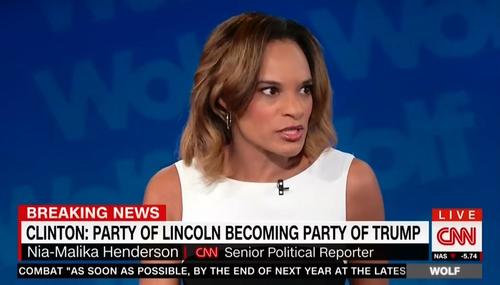 CNN: Maybe Clinton Better on Race Than Obama, Can Talk to Whites

Brad Wilmouth
July 14th, 2016 8:09 PM
On Wednesday's Wolf show on CNN, in the aftermath of Democratic presidential candidate Hillary Clinton's speech on race in Springfield, CNN's Nia-Malika Henderson talked up the views of Democrats in suggesting that Clinton might be better at handling race relations as President than President Barack Obama because she "can talk directly to white people in a way that President Obama might not have… 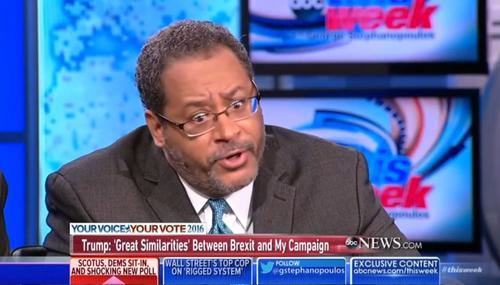 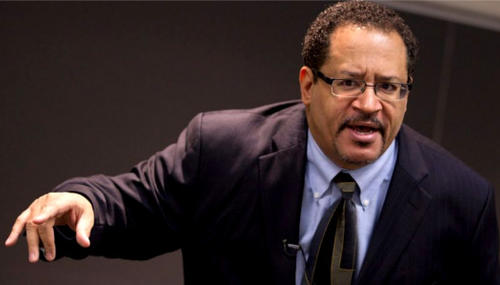 Dyson: We Have a 'Moral Obligation' to Protest Trump at GOP Convention 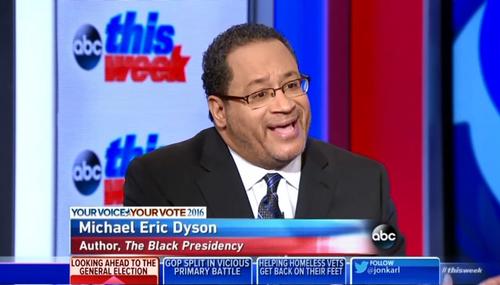 Rich Noyes
March 27th, 2016 1:39 PM
On Sunday’s This Week, Georgetown University professor and ex-MSNBC regular Michael Eric Dyson spewed a nearly-incomprehensible gumbo of academic jargon and made-up words. He claimed “millions” of Republicans “conceded to the legitimacy” of Trump’s birther claims against President Obama, vs. “some” who “stood on the gap,” and he juxtaposed Trump’s foreign policy “unsagacity” (good luck finding… 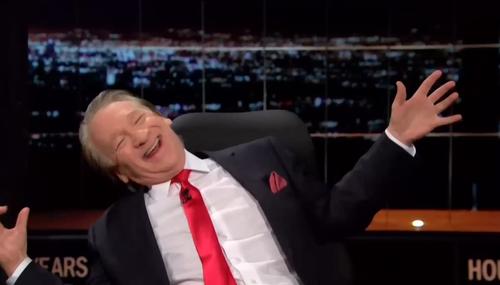 On HBO, Maher Panel Slams Scalia, Jokes About His Death

Brad Wilmouth
February 26th, 2016 11:57 PM
On Friday's Real Time with Bill Maher, left-wing HBO comedian Bill Maher and his all-liberal panel went after deceased conservative Supreme Court Justice Antonin Scalia, as Maher not only joked about the possibility that he died while watching his show, but ended up imagining him "murdering" birds and looking like Dumbledore from the Harry Potter series the evening before his passing.