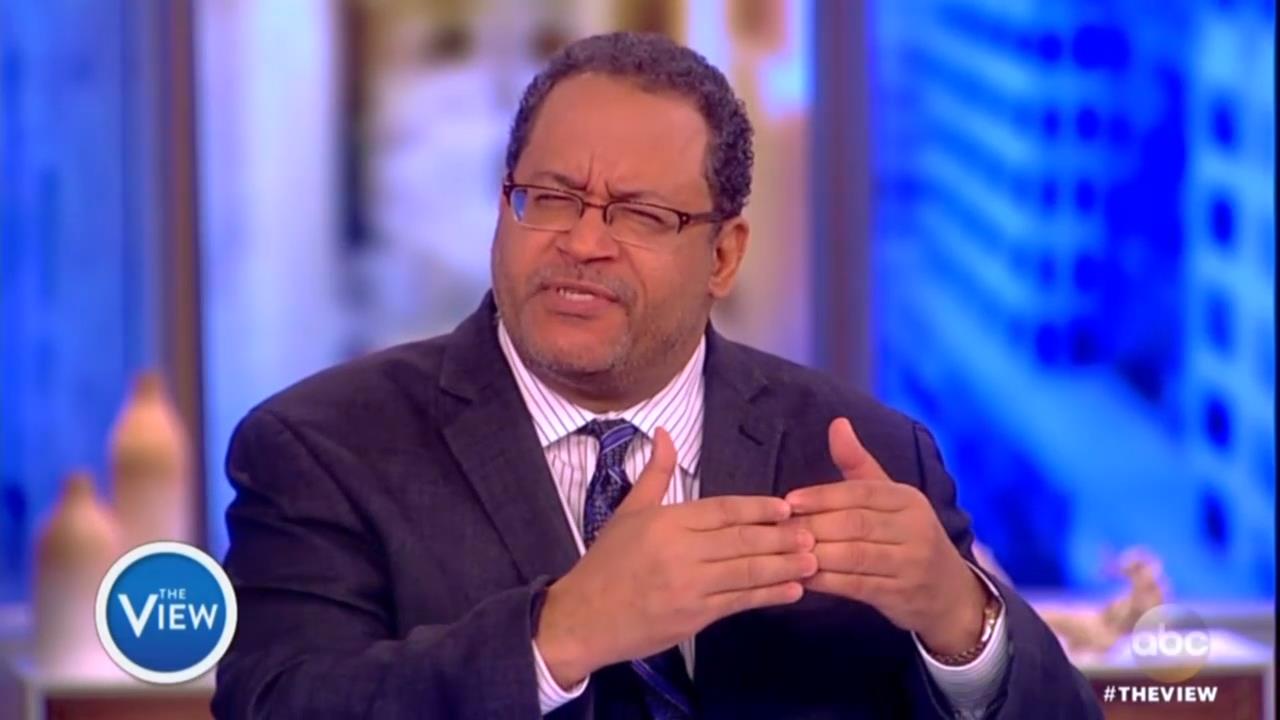 Georgetown professor and contributor to the New York Times Michael Eric Dyson appeared on Wednesday’s The View to promote his new book, Tears We Cannot Stop: A Sermon to White America. ABC gave the former MSNBC analyst plenty of time to talk about his favorite topic: racist white Americans. Dyson called out President Trump in particular as the “manifestation” of white America’s “refusal to grow up” and question the “legitimacy” of America’s greatness.

Sunny Hostin began by asking Dyson why he decided to write this book now with such a “provocative title.” Dyson then gave a strange, rambling analogy about Trump being a “rose” that was rooted in “white privilege” and “Dr. Frankenstein” “produced” Trump.

Hostin followed up by asking Dyson to further explain what white people don’t understand about “what it means to be black in America.”

SUNNY HOSTIN: [M]any people refuse to admit that their own whiteness is a privilege and you say, quote, the most radical action a white person can take is to to acknowledge this denied privilege to say, yes, you're right. What do white people not understand about what it means to be black in America?

DYSON: [W]hite brother and sisters don't see that they have privilege. They say, oh, my God. Look at you people who are politically correct now, you want safe spaces. Well your white body is a safe space in a way that African Americans, Latinos, women’s bodies are not . So what I'm suggesting to white Americans, I love you. I want you to engage in the introspecton that you encourage everybody else to do. Then think about the privilege. The ultimate privilege may be this, you encounter a police person and live to tell about it...I'm saying, there are many privileges that white brothers and sisters have and if you acknowledge it then we can figure out how to unmask that privilege and then to challenge it.

Dyson then called out Donald Trump as the “manifestation” of white America’s “refusal to grow up” and recognize their white privilege:

DYSON: [D]onald Trump is the manifestation the very face of kind of refusal to grow up. This is the first toddler presidency, the inability to acknowledge the legitimacy of America as a great nation.

Jedediah Bila ended the interview by bringing up Dyson’s past criticism of Obama for not bringing up race enough, and asked him what Obama could’ve done differently. Dyson responded by criticizing Trump some more and gushing that Obama was “one of the greatest presidents that ever lived.”

DYSON: The man was in an incredibly difficult position. I hesitate to say anything negative about a guy who could read, write, compute and who had literacy and who read books and who was informed at a high level. Versus what we got right now. A guy who tweets out his own arrogance. That’s what I mean by toddler. But I will say this. I think that two things, President Obama went out his way to castigate and cast dispersions against African-American people that I think led people to believe we got more problems than anybody else. Our pathologies are deeply rooted and entrenched. Secondly, I think what he did is that he failed to challenge white brothers and sisters. I don’t mean he had to be a black panther. I just meant he had to say white privilege is real. Let’s challenge that. All and all one of the greatest presidents that ever lived, his issues on race not so deep.