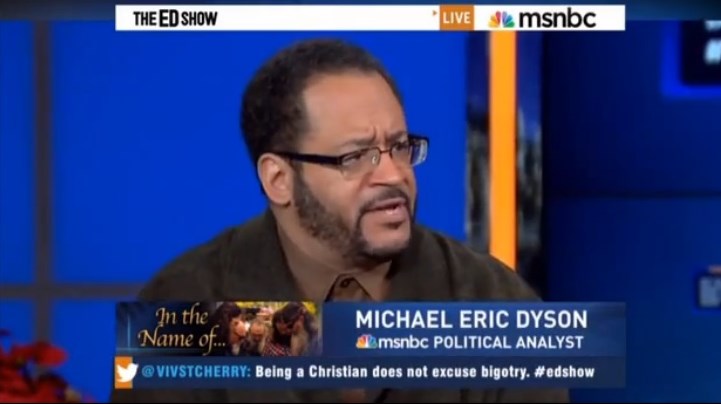 Dyson makes clear that he regards much of white America as a pernicious force. “We can do nothing to make our tormentors stop their evil,” Dyson laments to the Almighty. “How can we possibly combat the blindness of white men and women who are so deeply invested in their own privilege that they cannot afford to see how much we suffer?”

He likens law enforcement officers to terrorists (“We think of the police who kill us for no good reason as ISIS”) and slave drivers (“The police car is a mobile plantation”). He admits that he’d like to pay violence back in kind. “Lord, Dear Lord, I don’t want to feel this way, but I swear to you I want to kill dead any Godforsaken soul who thinks that killing black people is an acceptable price to pay for keeping this nation safe. But then, am I any better than that soul?” And, in shades of Rev. Jeremiah Wright, Dyson calls on God to “convict” America. “May this land know your displeasure, taste your holy wrath, for killing us like pigs without conscience,” he writes.

This kind of radicalism puts you right in the "Lean Forward" mainstream at MSNBC. Lozada was not done in the slightest bit:

At times, though, there seems to be a built-in irrefutability to Dyson’s case. Any effort by white people to disassociate themselves from charges of privilege, to bypass or mitigate guilt, is dismissed as just another case of “innocent whiteness” — of reckless, blind denial. “You are emotionally immature about race. . . . You have no idea that your whiteness and your American identity have become fatally intertwined,” Dyson accuses. “Your resistance to feelings of guilt is absurdly intense.”

....Dyson is also pessimistic about the chances for racial understanding in America and, in this book at least, he doesn’t show enormous capacity for it himself. “It is hard to be white and empathetic to others,” he argues early on. “It is hard for you to give up this willful ignorance. It is a drug.” And the arrival of Trump to the presidency may be the biggest high. “Whether he wishes to be or not,” Dyson writes, “Donald Trump is the epitome, not only of white innocence and white privilege, but of white power, white rage, and yes, even of white supremacy.”

Not every media account is that skeptical. The New York Times rewarded its contributor with a Sunday New York Times Magazine Q&A with white leftist Ana Marie Cox (currently with MTV News). She entertains both reparations for blacks and mentions disbanding the police! [Cox is the quesitoner in bold type in the original.]

I can’t help but think that if the same levels of police brutality were happening to white people, we would just disband the police.

Police brutality would not be seen as the price of keeping our society safe. Recently, I was outside of Ben’s Chili Bowl in Washington at 3 a.m., and a young white kid is cursing the police, and I’m going, “Oh, my God, they’re going to shoot him.” And then it occurred to me that they wouldn’t — he’s a white kid. And what did I hear the police say? “Now, son, you’re clearly inebriated. You need to go home and sleep this off.” And I said to myself: “My God! This is what we want!” We can’t even afford a display of anger that many white people have.

At the end of your sermon, you do a “benediction” section, in which you talk about making reparations on the local and individual level: donating to groups like the United Negro College Fund or a scholarship program, but also, to cite your example from the book, paying “the black person who cuts your grass double what you might ordinarily pay.” That gave me pause!

Good! I used to say in church, “If the sermon ain’t making you a little bit uncomfortable, it ain’t effective.” Look, if it doesn’t cost you anything, you’re not really engaging in change; you’re engaging in convenience. You’re engaged in the overflow. I’m asking you to do stuff you wouldn’t ordinarily do. I’m asking you to think more seriously and strategically about why you possess what you possess.

I agree with reparations, but maybe this is my white privilege speaking: I can’t imagine actually doing that.

That is what I meant by an I.R.A.: an individual reparations account.

If Dyson believes in individual reparations, it might explain how fervently the liberal media favors his radical "theological" output.