Such was actually said on CBS's "Face the Nation" (video follows with transcript and commentary):

Stossel Argues Gun Control Can Increase Crime, 'I Was Once as Clueless as Senator Schumer' 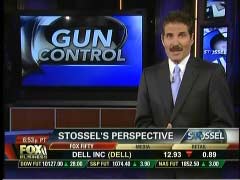 On Thursday’s Stossel show on FBN, host John Stossel devoted the program to making the case that gun control can increase crime rates and that higher rates of gun ownership tend to decrease crime. Stossel admitted that, even as a libertarian, it took time for him to come around to this truth as he and most in the mainstream media live in the New York City liberal bubble, not cognizant of all the states that have passed concealed carry laws and seen crime decrease. During a segment with Dennis Hannigan of the Brady Campaign, the FBN host observed: "Over the years, more and more states changed their laws to allow concealed carry. The mainstream media and my neighbors are so isolated here in New York City and in Washington, D.C., most of us had no clue that carrying a concealed weapon is already legal in the rest of the country. More places all the time, legal guns, and yet crime does keep dropping."

Stossel concluded the show by recounting Britain’s failed experiment with gun bans, and revealed that Democratic Senator Chuck Schumer, known for advocating gun control, had declined an invitation to appear on the show to argue his case as the FBN host took a self-deprecating jab at the New York Senator:

Writing in the Wall Street Journal, the Commissioners called the bill "unnecessary, partially duplicative of existing law, and severely burdensome to the right to engage in political speech and advocacy." They also accused Sen. Chuck Schumer, D-NY, and Rep. Chris Van Hollen, D-Md. -- sponsors of the Senate and House legislation, respectively -- of "partisan motives" designed to satiate the Democratic Party's labor union backers.

While some prominent news organizations, including the Washington Post, have raised serious concerns about the  legislation, other ostensibly (or at least presumably) pro-free speech news outlets are either silent or, in the case of the New York Times, simply parrot Democratic talking points and give critics of the bill a mention, though not a voice, and make sure to dub them "the business lobby." 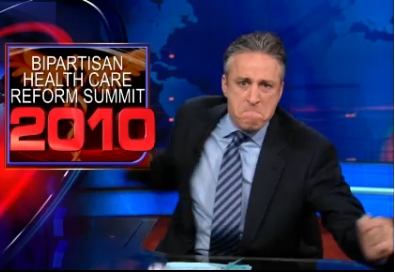 Jon Stewart said Thursday press reporting of President Obama's healthcare summit was so bad that if he had to score it like an Olympic event, he'd disqualify the contestants for sucking.

The comedian devoted a full ten minutes to the bipartisan meeting on Thursday's "Daily Show," and was largely an equal opportunity offender.

After taking what some would consider to be a cheap shot at "Senator Tom 'Killing Abortion Doctors Might Not Be Such A Terrible Idea' Coburn," Stewart quipped moments later, "That's Senator Chuck 'If I Was Any More Liberal and Jewish I'd Have T*ts and Be Barbra Streisand' Schumer."

But much of his attack was about the media coverage, especially toward the end (video embedded below the fold with partial transcript):

NBC Contradicts Itself on New Bill to Protect Consumer; May Hurt Students Trying To Establish a Good Credit Score

NBC's coverage of a new bill that restricts credit card companies has been riddled with contradictions - first attacking companies for taking advantage of young people, then admitting students need to build credit.

The House passed a bill on May 20 to restrict credit card companies which would make it very difficult for consumers under 21 to obtain a credit card unless they have a parent co-sign the card or prove they can pay.

That will make things difficult for college students who need to establish a line of credit to rent an apartment, buy an airline ticket or purchase a car. That was ignored by NBC "Nightly News" May 19 and CBS "Early Show" on May 20. "Good Morning America" didn't report the credit card story at all on May 20.

Call it an ominous warning, but Fox News Channel afternoon host and ratings sensation Glenn Beck on Wednesday cautioned viewers that government is strengthening its grip of power and is not going to stop at the First Amendment of the U.S. Constitution.

Beck declared on his May 6 broadcast the government is out of control, noting that Freedom of Information Act (FOIA) requests were a weekly occurrence, including efforts to make the TARP bailout more transparent earlier this year from the Treasury Department.

"We've got a government out of control and I'm telling you, it is up to you to control it," Beck said. "These stories of corruption and abuse of power, I'm going to continue to bring them to you as long as I possibly can, and everybody else on this network is dedicated. But it seems like every week this network is filing another Freedom of Information Act request. Even with all the resources of Fox, the truth still can't be fully exposed without you. I ask you, please - help us. Meet us here every day. Tell all of your friends what you learn here. Spread it. E-mail me. Tell me what I'm missing. We will do the best we can to provide you with the information, but it is a little overwhelming."

Is Obama Getting a Pass for Monday's Air Force One NYC Flyover?

If George W. Bush's White House military office had staged an Air Force One photo op flyover of Manhattan without warning New Yorkers beforehand resulting in buildings being evacuated and widespread panic, would media have castigated him for his wreckless stupidity and obvious disengagement from tensions those in the area still have due to 9/11?

This seems an important question given what happened Monday, and how the press are covering the incident with someone in the White House they can't hide their love for.

As the Associated Press reported Tuesday (video of incident embedded right to give you an idea of the panic this caused h/t NBer klchadwick, vulgarity warning):

Schumer: Talk Radio Needs to be Regulated Like Pornography

Did you know that talk radio needs to be limited on the airwaves just like pornography?

According to Sen. Chuck Schumer (D-NY) it does.

At least, that's what he said on Fox News Tuesday morning when asked his position on the Fairness Doctrine (video embedded right):

Why Doesn't the Media Report the Facts on Where the Blame Belongs on Financial Crisis?

Since the current financial crisis is taking place under a Republican administration it is easy for people to automatically blame Republicans. The media have happily pushed this misconception too.

We can debate the propriety of mentioning the name of banks that might be in financial trouble.  But one thing appears clear to Chris Cuomo [file photo]: it would be wrong to mention the name of a Democrat who could be in hot water.  Wouldn't want to cause a run on the Dem's political capital, after all. Cuomo's discretion was on display during today's Good Morning America.  Anchoring in the absence of Diane Sawyer and Robin Roberts, Cuomo was discussing the run on Indymac and the advisability of publicizing the names of other banks that might be in trouble with ABC financial consultant Mellody Hobson.

CHRIS CUOMO: People are so desperate in markets right now that negative information that allows them to short-sell or bet on banks not doing well is very popular.

MELLODY HOBSON: So I'm suspect about where the lists are coming from; the motives of some of the people putting the lists out here.

CUOMO: We saw the impact of panic not just on people but even in Congress, right?  A senator gets up and says "I've heard something about a certain bank."  It's in trouble the next day.

On Wednesday, Schumer once again claimed "if [Saudi Arabia] did a million barrels of oil a day increase from today, it would go down about -- the translation to gasoline would be about $.50 a gallon, maybe $.62."

Yet, on May 7, Schumer felt a likely similar increase from drilling in ANWR would "reduce the price of oil by a penny."

As Marc Sheppard over at the American Thinker cleverly pointed out Thursday, in Schumer's odd calculus, only increases in foreign oil production will bring down the price (file photo courtesy FoxNews.com):