Are you okay, Marc? I have a hankie you can use to wipe away that rolling teardrop that Alan Dershowitz possibly caused during your heated debate on Israel and Gaza during CNN Tonight on Monday.

The weird thing is that Marc Lamont Hill was actually crying over Israel (GASP!) defending itself against both rocket attacks and secret tunnels built from Gaza into Israel for the purpose of killing and kidnapping. A video was posted by Soopermexican showing Hill's tear of absurdly misplaced compassion (or was it frustration from arguing with Dershowitz?) rolling down his cheek.

The New York Times is growing fond of the front-page obituary, and it’s not just for global figures like Nelson Mandela. This pseudo-prestigious spot can be reserved for the best-remembered denizens of the gutter.

On Friday’s front page, the Times hailed Al Goldstein, the local pornographer who published Screw magazine, with the headline “A Publisher That Took the Romance Out of Sex.” (Three years ago, Penthouse founded Bob Guccione was relegated to page 34.)  He “lived to shock and offend,” wrote Andy Newman. But the Times failed to include his anti-religious bigotry. Take this example from LifeSiteNews:

Dershowitz: 'Very Strong Argument That What Ted Cruz Is Doing Is Deeply Unconstitutional'

After calling his former student "among the brightest" he's every had, Dershowitz said, "I think you can make a very strong argument that what Ted Cruz is doing is deeply unconstitutional."

Dershowitz: Zimmerman Should Ask For a Mistrial Due to His Lawyer’s Knock-Knock Joke

One of the lawyers for George Zimmerman on Monday actually began his opening remarks with a knock-knock joke.

Appearing on CNN’s Piers Morgan Live Monday, famed attorney Alan Dershowitz said, “I would be furious at my lawyer unless the lawyer told him he was going to open with that joke. In fact, I would ask my other lawyer to make a motion for a mistrial to start all over again.”

Dershowitz: 'I Don’t Understand the Way Some People on the Left Glorify American Terrorists'

Attorney Alan Dershowitz on Monday struck back at Robert Redford and other liberals for their seeming devotion to violent, homegrown activists.

As he hosted a debate on Piers Morgan Tonight on Monday,  CNN's Piers Morgan repeatedly cut off conservative guest John Lott as the former University of Chicago professor tried to argue against imposing additional gun control.

At one point, as he grew impatient with Lott trying to explain that the overwhelming majority of guns - 86 percent - are "semi-automatic," and that an "assault weapon" is not as unusual a weapon as it might sound, Morgan lost control and started ranting:

Yet another example of the pathological left-wing meme in response to the Tucson bloodbath -- do as we say, not as we spew.

Here's Bill Press on his radio show this morning, telling all dozen of his listeners what he thought of Sarah Palin's remarks yesterday on the "blood libel" of liberals blaming conservative rhetoric as root cause of the gunman's rampage (audio) --

To me, it reminded me of those hostage videos we've seen where there's a terrorist on each side holding a gun to a person's head and they're forced to read a script, while she read the script, first of all, yesterday saying don't! don't! let's not criticize each other now. 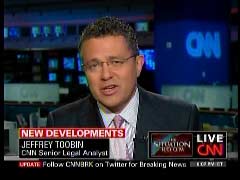 CNN senior legal analyst Jeffrey Toobin on Tuesday twice labeled President Obama’s Supreme Court nominee Sonia Sotomayor a “moderate liberal.” On American Morning, minutes after the Latina judge’s name emerged near the bottom half of the 8 am Eastern hour, Toobin predicted that she would “probably have very little trouble getting confirmed, and who will be a voice like David Souter for moderate liberalism.” Hours later, during The Situation Room program, he predicted that Sotomayor, if confirmed, would rule as a “moderate liberal, like Ginsburg and Breyer.”

American Morning anchor T. J. Holmes brought on the legal analyst to discuss the Obama nominee. Toobin first outlined that Sotomayor was “a very eminent judge....She brings a certain bipartisan aura, because she was originally appointed to the federal district court by the first President Bush....[T]his looks like a very solid pick, someone who will probably have very little trouble getting confirmed, and who will be a voice like David Souter for moderate liberalism.” Minutes before on the CNN program, Harvard law professor Alan Dershowitz referred to the nominee as “moderate and to the left.” Holmes followed up on this note, and asked, “Is that about right?”

I have said consistently that I believe the Second Amendment is an individual right. -- Barack Obama, June 26, 2008

In some ways, the Supreme Court term that just ended seems muddled: disturbing, highly conservative rulings on subjects like voting rights and gun control . . . In another sharp break with its traditions, the court struck down parts of the District of Columbia’s gun-control law. After seven decades of holding that the Second Amendment’s right to bear arms is tied to raising a militia, the court reversed itself and ruled that it confers on individuals the right to keep guns in their homes for personal use. The decision will no doubt add significantly to the number of Americans killed by gun violence. -- NYT editorial, A Supreme Court on the Brink, July 3, 2008 [emphasis added]

How far left is the editorial board of the New York Times?  Far enough that, when it comes to the Second Amendment, Barack Obama would seemingly qualify as "highly conservative" in its eyes.

The gist of the Grey Lady's editorial of today is to warn voters that the Supreme Court is just a vote away from a conservative majority. The paper instructs voters to keep that grim prospect "firmly in mind when they go to the polls in November."  In the course of its scare-mongering, the editorial liberally sprinkles terms sure to send a shiver down lefty spines: "highly conservative," "a far-right majority," "cold-hearted," "dedicated members of the conservative movement," "the conservative bloc," "far-right bloc," 'one more conservative appointment would . .  push [the Court] even further in a dangerous direction."

By Matthew Vadum | March 10, 2008 10:00 PM EDT
The revelation that New York Governor Eliot Spitzer, the Social Justice League's caped crusader, has been involved in a prostitution ring will no doubt come as a shock to all those progressives who have faithfully –often fanatically– boosted him over the years.

Was It A Secret That Alan Dershowitz Loathed Bill O'Reilly?

The book editor of the Washington Post responded to the charge that its scalding Bill O’Reilly book review by Alan Dershowitz was a pre-planned hit job.