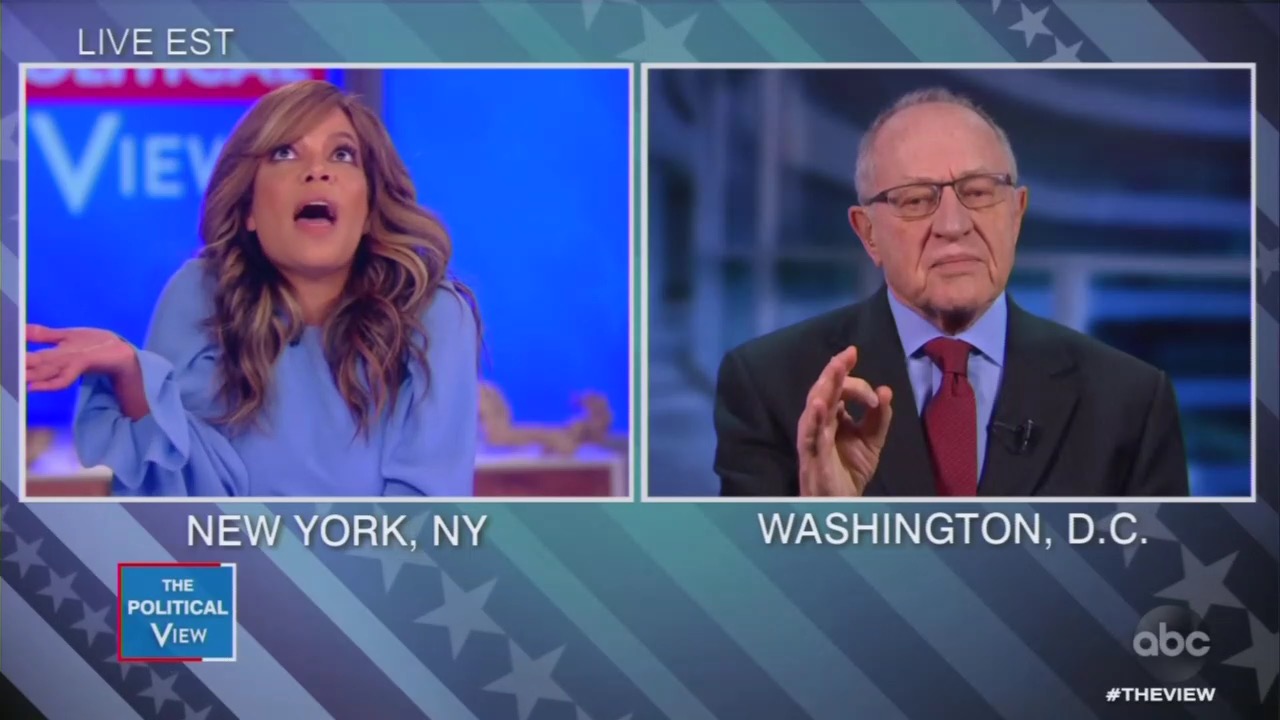 President Trump impeachment defense lawyer Alan Dershowitz appeared on The View Wednesday and was put through the wringer by the extremely hostile hosts who sighed, rolled their eyes and mocked their guest for daring to bring up U.S. history, in his defense of the President.

As soon as he Skyped in, the condescending questions began. First it was co-host Joy Behar, who sneered that no one agreed with the Harvard Law professor and constitutional scholar that the Ukrainian phone call was not impeachable. She wondered why he was worth listening to:

"We just heard you argue in that clip that whatever John Bolton says, doesn’t matter. You still don't think any of this is impeachable. But the only people who actually agree with you are on your defense team. And 75% of Americans want to hear from Bolton. So why should we listen to you?" she demanded to know.

Dershowitz argued that the articles of impeachment brought forth by the Democrats were unconstitutional. Behar pushed back, again, saying that “not one” scholar agreed with him on that. As Dershowitz started to point back to history, he only got a few words in before co-host Whoopi Goldberg mocked him:

WHOOPI: Wait, wait wait. Alan. [crowd laughter] In 1492 Columbus sailed the seas of blue. But I need to move on. So you’re saying now that you don’t need to be a crime?

DERSHOWITZ: No, no, no, you're not going to get me to move on until I make this point --

WHOOPI: Okay, okay okay here's the thing, Alan, you're not going to get any time because you got four people try to ask you questions so I'm asking you to move faster!

Dershowitz claimed that academia used to take the same position as he did but flipped as soon as Trump took office. “If Hillary Clinton were being impeached, they'd all be on my side,” he argued, which irritated Behar.

“That's just baloney. That's just baloney!” she exclaimed. Whoopi cut in again to demand he make his points faster. “So I'm moving you on or I'm cutting you off. One or the other is going to happen,” she scolded, which made the audience holler and cheer again as if this was the Jerry Springer show.

Former federal prosecutor and co-host Sunny Hostin also got testy with Dershowitz, shouting over him for disagreeing with her about a GAO report that Democrats have been touting. Again, as their guest referenced cases in history where other presidents could’ve been impeached by the Democrats’ current standards, Whoopi sighed, “Oh God!” off camera in irritation while the audience and Behar chuckled derisively.

Hostin’s final question before the show cut to commercial was the perfect example showcasing the left’s desperation. She asked:

HOSTIN: Let me ask you this very quickly just for giggles. What if the president spent the year vacationing in Moscow, changed the language of this country perhaps to Russian or decided to stop doing his job entirely and perhaps golf all day?

HOSTIN: Are you saying we have no grounds to impeach him because none of that is a crime either?

When they came back, Whoopi actually had the audacity to lecture the audience to “hold back a little” because the hosts were “trying to be respectful; we really are.”