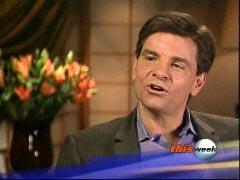 Sunday's "This Week with George Stephanopoulos" offered more evidence that Katie Couric's CBS interview with Michael J. Fox was too cozy and unchallenging. She didn't push the celebrity into admitting a common celebrity error: he's speaking without reading. On Missouri's Amendment 2, the center of his ad pushing Democrat Claire McCaskill for Senate, he said, "I have to qualify it by saying I'm not qualified to speak on the page-to-page content of the initiative. Although, I am quite sure that I'll agree with it in spirit, I don't know, I— On full disclosure, I haven't read it, and that's why I didn't put myself up for it distinctly." (AP didn't find that part newsworthy.)

On the CBS "Public Eye" site, Brian Montopoli explored Couric's whopping conflict of interest in her Fox interview -- she's been involved in raising money and lending her glamour to Michael J. Fox's foundation. Couric maintained she is not biased by her personal feelings, asked the tough questions, and at the same time, she boasted she has more sympathy and more knowledge than the competition:

"'I don't feel like it really reflected or influenced my approach...I think I probably have even more sympathy for his situation, and I think I understand the science better than some other people,' she said. 'But I challenged him on questions people who support stem cell research would not necessarily want asked' – such as ethical 'slippery slope' questions inherent in embryonic stem cell research and the notion that such research could conceivably be done exclusively in the private sector."

A peek at the transcript shows that Couric  offered only very timid, brief questions about the opposition point of view to Fox:

“Some people are concerned about this science because they feel it's a slippery slope, and that there won't be enough oversight or regulation.”

“What about other people who say, 'listen, this can be done in the private sector.'
Why not take politics out of it? Why not take it out of the government's hands?”

Even this second question would suggest not knowledge, but naivete. Embryo-destroying stem-cell research is almost entirely in the private sector now, but that hardly means the politics has been drained out of it. It's at least as controversial as testing soaps on animals' eyes.

Stephanopoulos didn't pull out Fox's didn't-read-it admission by being Russertesque with him, God forbid, but by getting into the substance about cloning: "In the [anti-cloning] ad now running in Missouri, Jim Caviezel speaks in Aramaic. It means, 'You betray me with a kiss.' And his position, his point, is that actually even though down in Missouri they say the initiative is against cloning, it's actually going to allow human cloning."

This only underlines the criticism that Couric lacks gravitas, and offers more style than substance to CBS. Or in this case, she had more sympathy than substance.

In asking Couric about her on-air admission of publicly supporting Fox's foundation, Montopoli, perhaps a little intimidated as an in-house critic, did not seem to ask Couric expressly why she merely said on air she that "I've made contributions for Parkinson's research through Michael J. Fox's foundation." That doesn't sound like as intimate a relationship -- I wrote a check -- as Couric's actual, glamorous in-person participation at the Fox Foundation's fundraisers in New York City.

She did acknowledge on the site: "'The reason I donated to his foundation is because of my father. It was a combination of my admiration for Michael and my personal experience with my dad,' she said. Couric said she had introduced people at events for Fox's foundation in the past, and she didn't want people to suggest she was trying to hide her connection to him."

I posted a reply on the Public Eye site:

Brian, thanks for asking about this, and it is right for Katie Couric to offer some disclosure. (She did not do so this morning on The Early Show.) But this is not full disclosure. Couric has not merely contributed to the Fox Foundation, she has made appearances at their fundraisers, loaning her glamour and celebrity, not just her money.

Her raising of the "uncomfortable" issues was nice, but vague. Opponents of government funding for embryo-destroying research would have liked a tougher question about the text of these ads, that Fox claimed Republicans were for "criminalizing" science and were opposed to "life-saving" cures. There is obviously a scientific difference between a cure, and just a hope for a cure.

St. Petersburg Times columnist Eric Deggans -- who occasionally calls me for comment, and a friendly debate -- responded to my post, recycling these paragraphs from his blog:

Because of her friendship with Michael J. Fox, her experience with Parkinson's and her past donations, Couric knew that much of what Limbaugh was saying about Fox was horse puckey. I think one of the problems journalists trying to play the fairness game face with unscrupulous pundits such as Limbaugh, is their williness to advance patently nonsensical ideas as genuine discourse.

I think Couric, unfortunately, gave Limbaugh's criticisms much more weight than they deserved. And it is, in the end, a journalist's job to discern between valid criticsms and cheap, nonsensical shots...

You liberals are so boastful about having All The Answers that you're avoiding the main, scientific point: embryonic stem cells have NOT helped one, not one patient.