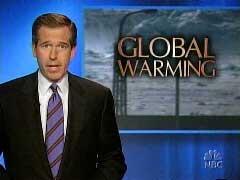 The broadcast network evening newscasts on Tuesday, especially NBC and ABC, jumped to hype a House Committee on Oversight and Government Reform hearing meant to publicize a report from two far-left groups about how the Bush administration supposedly suppressed science about the dire threat of global warming -- as if that view isn't already getting plenty of play in the mainstream media. “The question in Washington today was this,” anchor Brian Williams intoned in leading the NBC Nightly News: “Did the Bush administration in any way try to cook the books on the topic of global warming? Government scientists were called before a congressional committee today and asked if the White House or anyone else ever tried to stifle or squelch or silence the evidence that climate change is taking place around the globe.” Andrea Mitchell refused to properly label the groups as she trumpeted: “With Democrats holding the gavel in both houses, advocacy groups were given the chance to present a new study revealing unprecedented and widespread interference with scientific reports, largely by a former oil industry lobbyist working for the White House.”

ABC's Jake Tapper largely followed the same script, but World News did not lead with his piece and he at least included a brief note of doubt as he cited a same-day Senate hearing on global warming and how “the committee's previous Chairman, Senator Jim Inhofe, has called global warming a 'hoax.'” Like Mitchell, however, he followed up with the same John McCain-enabled formulation: “For the most part, though, Senators from both parties expressed concern.” Tapper began with the House confab as he relayed how “scientists say their work on global warming has been watered down and twisted by a White House that does not want the public to hear about it.”

But the public certainly is hearing about the most-dire claims.

Just Tuesday, on ABC's Good Morning America as detailed in this NewsBusters posting by Scott Whitlock, Sam Champion highlighted how “some say we already may be at a point of no return.” Previewing a UN report, Champion touted: 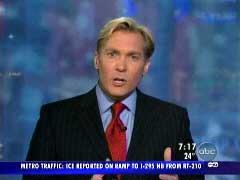 “This morning, 500 of the top scientists in the world are meeting behind closed doors to finish up a landmark report on global warming. And the picture they're painting isn't pretty. We're talking about change that's not 100 years away, but within the next ten years. This is not the future -- it's happening today. Already massive glaciers and sea ice are disappearing. Droughts are ravaging Africa, Southern Asia, and Australia. And rising oceans are covering islands and beaches. And a draft of a new report on climate change obtained by ABC News paints a disastrous look for global warming....

“But some say we already may be at a point of no return. On Monday, Indonesia's environmental minister warned that rising sea levels may cover some 2000 of his country's more than 18,000 islands in just 23 years. And we'll be talking about other stories about global warming all this week as we count down to the release of that full report on Friday. And I'll be there in Paris on Friday for the release of that report.”

Back on the January 24 CBS Evening News, anchor Katie Couric teased a story about the same report:

"An important report on global warming comes out next week. We have it tonight. Is it too late to avert worldwide disaster?"

And two weeks ago, Williams set up a NBC Nightly News report from an ITN correspondent about an impending “catastrophe”:

"NBC News 'In Depth' tonight, a trip to one of the coldest and most remote places on earth to see in dramatic fashion the impact of climate change on planet earth. Correspondent Lawrence McGinty of our British partner ITN reports tonight from the stunning landscape of Antarctica, a place he says where a catastrophe is unfolding slowly but surely."

The MRC's Brad Wilmouth corrected the closed-captioning against the video for the January 30 NBC Nightly News story centered around the report from the Union of Concerned Scientists and the Government Accountability Project.

Brian Williams teased: “Did the Bush administration turn up the heat on government scientists to stifle their views on global warming?”

Williams led: "Good evening. The question in Washington today was this: Did the Bush administration in any way try to cook the books on the topic of global warming? Government scientists were called before a congressional committee today and asked if the White House or anyone else ever tried to stifle or squelch or silence the evidence that climate change is taking place around the globe. What happened today is a direct result of the last election. There is a new urgency these days on Capitol Hill, where the Democrats in charge say the reality out there is worse than the reports they've been getting. And they say the time to fix it is running very short. We begin tonight in our Washington news room with NBC's Andrea Mitchell. Andrea, good evening."

Andrea Mitchell: "Good evening, Brian. Government scientists have been complaining for two years that the Bush administration has been forcing them to soft-pedal their findings on global warming. But now Democrats have the clout to demand answers. With Democrats holding the gavel in both houses, advocacy groups were given the chance to present a new study revealing unprecedented and widespread interference with scientific reports, largely by a former oil industry lobbyist working for the White House."

Rep. Henry Waxman (D-CA): "They tried to delete a discussion of the human health and environmental effects of climate change." 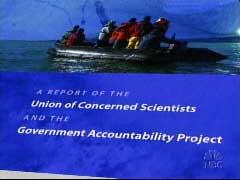 Mitchell: "Documents uncovered by the Government Accountability Project, an advocacy group, revealed that critical findings were eliminated from draft reports. Questions like: Is abrupt climate change real? And: What is the relationship between the drought in the West and climate variability and change? Both crossed out with a handwritten note: 'It is not necessary here to list these examples.'"

Rick Piltz, former climate change senior associate: "It wasn't just policy, it was spinning the scientific, the state of knowledge."

Mitchell: "A survey of more than 300 scientists and seven agencies studying climate change found nearly half were personally pressured to eliminate the words 'climate change' or 'global warming.'"

Dr. Francesca Grifo, Union of Concerned Scientists: "Our investigations found high-quality science struggling to get out."

Mitchell: "There is now a growing consensus that fossil fuel emissions are melting the ice cap with dramatic results, as witnessed in Antarctica two weeks ago by our British partners, ITN."

Mark Austin, ITN News, over video of part of an iceberg collapsing: "You can see some of these icebergs are melting. You can feel, there we are, I mean, that, there we are, that gives you an idea of what it's like." 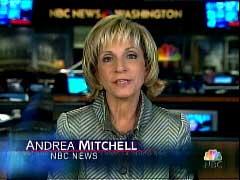 Mitchell: "Who watered down most of the government reports? The scientists point to Philip Cooney, a former oil lobbyist in charge of the Bush policy who then left to work for ExxonMobil. He refused to talk to NBC News today."

Carol Browner, Clinton EPA Administrator: "The idea that an oil, a former oil lobbyist would be allowed to edit a scientific document from one of the agencies is simply inexcusable."

Mitchell: "Now, candidates in both parties are scrambling to cap emissions."

Senator John McCain (R-AZ): "The argument about climate change is over. Now it's time to act. The argument is over."

Mitchell: "Tonight the Bush administration told NBC News claims that the administration interfered with scientists are false and our focus is on taking action and making real progress. Many Republicans and Democrats in Congress want to see a lot more."