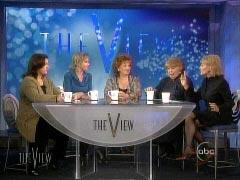 One would have thought that the Democratic takeover of Congress and Defense Secretary Donald Rumsfeld’s resignation would have preseted plenty of fodder for the women of  ‘The View’ to debate on Thursday’s show. However, it was a discussion on Iraq and the war on terror that dominated today's 'Hot Topics' segment. Not surprisingly, co-host Rosie O’Donnell equated the post-September 11th America to the "McCarthy era" and claimed people were "blacklisted" and labeled "unpatriotic" if they expressed any dissent from the Bush administration. O’Donnell also defended the United Nations as a "world voice" and took a shot at Iraq war ally Britain for being "on our side and in our pocket." The liberal O’Donnell then went on to tell conservative co-host Elisabeth Hasselbeck to not be afraid of terrorists:

Rosie O’Donnell: "Faith or fear, that's your choice. You can walk through life believing in the goodness of the world, or walk through life afraid of anyone who thinks different than you and trying to convert them to your way of thinking. And I think that this country–"

Elisabeth Hasselbeck: "Well, I'm a person of faith, so I, but I also believe–"

O’Donnell: "Well, then, get away from the fear. Don't fear the terrorists. They’re mothers and fathers."

Joining the ladies as a guest co-host was Barbara Walters’ best friend, retired opera singer Beverly Sills. Sills seemed to fit in well with the majority liberal ‘View’ panel, as she deplored, what she saw as a lack of vocal opposition to the war before it began, leading to O’Donnell’s rant equating today’s environment to the "McCarthy era":

Beverly Sills: "And the weapons of mass destruction– I don't remember everybody–now you can't find anybody who was in favor of it ever. I mean, where was the great, great screaming and yelling?"

O’Donnell: "I think it was a tough time to raise your voice in dissent in this country because look what happened to the Dixie Chicks, people were blacklisted. We were close to the McCarthy era, where if you said that you were against the policies of the administration, you were called unpatriotic."

Hasselbeck pointed out that before the Iraq war, Senator Hillary Clinton had made this statement during a speech on the floor of the U.S. Senate:

Senator Hillary Rodham Clinton: "It is clear, however, that if left unchecked, Saddam Hussein will continue to increase his capacity to wage biological and chemical warfare, and will keep trying to develop nuclear weapons."

O’Donnell used Clinton’s words to defend the United Nations and slammed Britain for being "on our side and in our pocket":

Hasselbeck: "These are quotes of, of people like Hillary Clinton, who were, ‘if left unchecked, Saddam Hussein will continue to increase his capacity to wage biological warfare–"

O’Donnell: "Ok, ok, stop, stop. If left unchecked, so what she was saying is maybe we should have let the U.N. finish their job before we invaded in defiance of the world."

Hasselbeck: "The U.N. wasn’t doing their job. He was in violation of how many sanctions?"

Hasselbeck: "I have more quotes."

Sills then rejoined the conversation, seemingly arguing for negotiating with the enemy:

Sills: "In the second world war, we were fighting Adolf Hitler from Germany, Mussolini from Italy, you know, we knew, we knew–"

Sills: "Hirohito from Japan. Who are we? Who, if we decide now, okay, let’s bring our men and women home, it’s all over. Let’s sit down at the table and negotiate. What are we negotiating, and with whom? Does anybody know the name of the enemy?"

O’Donnell: "It's a vague, it’s a vague nation called terrorists."

Sills: "But I’m going to say that–I mean, has somebody said to me, I hate you Americans because my children have no electricity, they’re not educated, we have no medication, they’re very poor. If somebody said that to me, I would really sit down and want to listen to them and want to do something."

Sills went on a nonsensical rant, where she made it sound as if the government had placed the blame for September 11th on one person:

Sills: "So far we've seen one fellow with a big birthmark on his face and he's gone to jail because he's the only one responsible for, for the catastrophe that happened in this country."

Behar: "Saddam, you mean. Who are you talking about? Hussein?"

It’s not exactly clear to whom Sills was referring, but most people recognize that those responsible for the 9/11 tragedy either died in the terror attacks, been killed or captured, or are being pursued in the war on terror.

Towards the end of the segment, O’Donnell berated Hasselbeck for "fearing" terrorists:

Hasselbeck: "Well, I'm a person of faith, so I, but I also believe–"

O’Donnell: "Well, then, get away from the fear. Don't fear the terrorists. They’re mothers and fathers."

If the phrase "faith and fear" sounds familiar, it should. O’Donnell, as NewsBusters reported here, used that line before, arguing that "the government should lead by faith, never by fear," in the same program where she declared, ‘radical Christianity is just as threatening as radical Islam in a country like America."