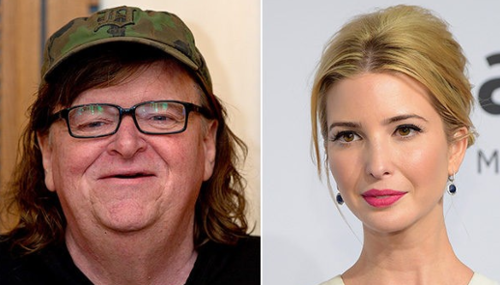 Michael Moore Begs Ivanka Trump to Give Her Father an ‘Intervention’

Randy Hall
August 12th, 2016 4:55 PM
Just when you think you've seen it all, along comes liberal filmmaker Michael Moore posting an open letter to Ivanka Trump asking her to encourage her father, Republican presidential nominee Donald Trump, to drop out of this year's race to win the White House. In the missive, which is entitled “An Open Letter to Ivanka Trump From Michael Moore,” the Where to Invade Next… 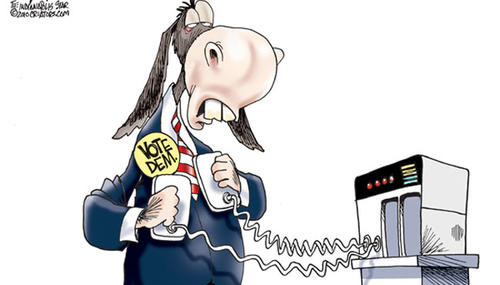 John Nolte
July 8th, 2010 5:57 PM
Deadline Hollywood Daily's Editor-In-Chief Nikki Finke has declared a Red State Alert over the news that documentary filmmaker and Oscar-winner Michael Moore has just been elected to the Academy of Motion Picture Arts and Sciences' Board of Governors. She writes, Hollywood-hating conservatives are going to have a field day with this (And predictably the L.A. Times' Patrick Goldstein…

Jeff Poor
March 11th, 2010 12:06 AM
When Michael Moore starts getting panicked, you know times are getting tumultuous for the left and the Democratic Party.  The anti-corporation, sometimes conspiracy theorist documentary filmmaker aired his frustrations about the current health care reform predicament. Congressional Democrats have gotten themselves into a mess with time running out as the midterm election cycle fast approaches…

Tim Graham
January 29th, 2010 9:48 PM
The leftist U.K. Guardian newspaper is celebrating an economics lecture from mockumentary filmmaker Michael Moore. The headline: "Capitalism is evil...you have to eliminate it"Moore told the Guardian's Chris McGreal for their Saturday editions that America needs a radical new economic order: But what does it mean, to replace capitalism with democracy? He sighs and tries to explain. In…

Jeff Poor
September 30th, 2009 11:56 AM
Has it really come to this? Is MSNBC so in the tank for the Democratic Party that it takes far-left documentary filmmaker Michael Moore to bring up malfeasance by a leading Democrat? Moore appeared on MSNBC's Sept. 29 "Hardball" to promote his new film "Capitalism: A Love Story." With exception of "The Ed Show" fill-in host Lawrence O'Donnell noting the Senate…

Julia A. Seymour
September 23rd, 2009 5:22 PM
Millionaire Michael Moore says capitalism is evil and that the entire system should be thrown out for one that is "democratic" and "fair." That's the overarching message of Moore's new documentary, "Capitalism: A Love Story," which will be widely released Oct. 2. The film won two prizes at the Venice Film Festival and was lauded by critics there and at the Toronto…

Has the Left Tired of Michael Moore’s Shtick

Jeff Poor
June 15th, 2009 3:20 PM
Here we go again. Controversial filmmaker Michael Moore is going offer his solution to societal ills through one of his documentaries. If Moore's past movies are any indication of the coverage he will get, it is sure to be a media hit. Already, Huffington Post blogger and MSNBC daytime anchor Carlos Watson is praising praised Moore's early promotion of the flick. "Michael Moore, the…

Brad Wilmouth
January 11th, 2009 1:03 AM
On World News Saturday, during the show’s "A Closer Look" segment, ABC anchor David Muir gave attention to those who question whether CNN’s Dr. Sanjay Gupta has sufficient qualifications to be Barack Obama’s surgeon general. Muir even played a clip of David Letterman poking fun at Gupta twice during the show: "The choice, it was between a Gupta, Dr. Phil, and a guy on Scrubbs. I…

Jeff Poor
August 30th, 2008 11:08 AM
If you put controversial left-wing filmmaker Michael Moore and MSNBC "Countdown" anchor Keith Olbermann in the same setting - there's bound to be some sort of lunatic remark made. Their latest get-together, neither failed to disappoint. On the August 29 broadcast of "Countdown," Moore told viewers how Hurricane Gustav, a storm with the potential to be catastrophic, reaffirmed…

Noel Sheppard
February 23rd, 2008 11:34 AM
If Michael Moore wins an Oscar Sunday for his controversial documentary "SiCKO," it seems certain Hollywoodans and the left will try to use the moment to advance universal healthcare in this country much as they did last year with Al Gore's "An Inconvenient Truth" and global warming.Yet, as media gush over Moore and his socialist healthcare philosophies, will they point out…