Left-wing comedian Bill Maher is not one to hide his disdain for conservative politicians he disdains, but he really pushed the envelope today with the help of comedian Will Ferrell's Funny or Die website.

The “Newseum” in Washington is, like it sounds, a museum about journalism. Unlike most DC museums, it’s not free (or taxpayer-funded). It costs $21.95 for an adult to see exhibits like a reconstruction of the late NBC host Tim Russert’s office.

Since this doesn’t sound like a hot tourist destination, they’re now putting on the shamelessly Will-Ferrell- movie-promoting “Anchorman: The Exhibit” in a deal with Paramount Pictures. Get a load of the rationalizations in the Washington Post’s Express tabloid:

On Wednesday's CBS This Morning, Jan Crawford boosted the latest pro-ObamaCare campaign from the President's supporters in Hollywood. Crawford played back-to-back soundbites from liberal comedian Will Ferrell's "Funny or Die" website, and highlighted the list of celebrities who have signed up for the campaign.

The correspondent did later acknowledge that the controversial law is still "deeply unpopular", and featured a clip from a recent anti-ObamaCare ad released by the Crossroads GPS super PAC [MP3 audio available here; video below the jump].

Will Ferrell really wants people to re-elect the President.

In a new Obama campaign video, the actor/comedian said, "If you vote I'll eat anything you tell me to - garbage, hair, human toenails, underpants, whatever, I'll do it" (video follows with transcribed highlights and commentary):

Zach Galifianakis Attacks the Koch Brothers: 'They Are Creepy' - 'It’s Not Freedom What They Are Doing'

Following in the footsteps of HBO's The Newsroom and virtually all liberal media members, actor Zach Galifianakis attacked the Koch brothers Monday.

As reported by the New York Daily News:

CNN brags of being a centrist news network in between Fox News and MSNBC, but how serious and non-partisan can it be when hosting liberal comics to discuss the serious issues of the day?

On Tuesday's The Situation Room, CNN's Joe Johns goaded Obama fund raiser Will Ferrell and liberal comedian Zach Galifianakis to preach campaign finance reform. "There seem to be a little bit of takeouts on the Koch brothers, the conservative brothers who have done so much funding of politics. Talk to us a little bit about the message," Johns asked.

If Janeane Garofalo says something bad about the Obama administration, does that mean she's a racist redneck?

After all, she's been telling people almost since Inauguration Day that anyone that disagrees with this president does so because of the color of his skin.

Not surprising to folks that have followed the career of this shameless left-wing activist, this wasn't the only glaring hypocrisy in this interview (h/t Big Hollywood):

Why We Shouldn't Listen to Overpaid Celebrities About Healthcare

In response, an as of yet unknown organization has created a fabulous video mocking Ferrell's efforts:

Something terrible is happening... Overpaid celebrities don't have a big enough voice when it comes to Healthcare Reform. 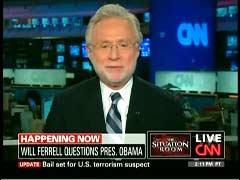 On Tuesday’s Situation Room, CNN anchor Wolf Blitzer used a left-wing talking point on the health care debate during a brief about a web ad made by comedian Will Ferrell and other celebrities: “One of the most famous comedians joins some of your favorite actors to promote health care reform. So why are they defending health care...executives making billions of dollars at your expense?” [audio clip available here]

Blitzer devoted three news briefs during the 5 pm Eastern hour of the CNN hour to the ad, all the while omitting how Ferrell and his group made it in conjunction with the leftist organization MoveOn.org. After playing a clip from the web ad during the first brief, which came 10 minutes into the hour, the CNN anchor highlighted how the celebrities were “using comedy to make some serious points about health care. This video [is] getting a lot of attention out there.”

By P.J. Gladnick | February 8, 2009 10:23 AM EST
It seems that New York Times writer Patrick Healy has a big fascination with the word "penis." He uses it over and over and over again in his article about how actor Will Ferrell exposes a projected penis on stage in his play, "You're Welcome, America. A Final Night With George W. Bush." The New York Times must be really desperate if they have to resort to "penis" overuse to get their member circulation up. I wouldn't be a bit surprised if Healy's story conference with the Theater section editors resembled a certain scene from the movie, "Porky's." When reading Healy's penis article you might think he is also working for Hustler magazine as well as the Times:

So far six audience members have stormed out midperformance of the Broadway show “You’re Welcome America. A Final Night with George W Bush,” the comedian Will Ferrell’s lampooning of the 43rd president, according to those keeping count at the Cort Theater. But they haven’t been leaving after a particular Ferrell quip.

They’ve been standing up, instead, after the projection of a supersize photo on the backdrop of the stage. A photo of a penis. Specifically, as Mr. Ferrell (who plays President Bush) leads the audience to believe, the president’s penis. Except that’s not quite right.

“It’s an anonymous but age-appropriate public domain Internet penis,” said Adam McKay, the play’s director. “We went on the Web and got a penis.”