Miller: Blago Only One Associated With Obama Who's Paid His Taxes

Comedian Dennis Miller did his weekly stint on the "O'Reilly Factor" Wednesday, and was in truly rare form.

Besides claiming that Hillary Clinton has "been cheated on more frequently than a blind woman playing Scrabble with gypsies," and calling her husband "a big, loopy horn dog," Miller marvelously depicted impeached Illinois governor Rod Blagojevich as "the only guy Barack Obama has met in the last five years of his life who has paid his taxes."

The entire delicious video and transcript are below the fold:

Seven weeks after his arrest for allegedly attempting to peddle Barack Obama’s Senate seat, Rod Blagojevich was removed as governor of Illinois on Thursday. ABC, CBS and NBC all offered full reports last night and this morning, but none of the anchors or reporters provided any hint that Blagojevich was a Democrat.

Back on December 9, reporting on the then-governor’s arrest, NewsBusters noted how all three of the evening newscasts had properly referred to Blagojevich as a Democrat. NBC reporter Lee Cowan described the charge as “that the two-term Democratic Governor tried to sell a seat in the US Senate to the highest bidder,” while ABC’s Brian Ross stated that “the boyish-looking Democrat branded a greedy, foul mouth politician who tried to sell a US Senate seat to the highest bidder.”

But now that the scandal was ending Blagojevich’s political career (he’s now banned from ever serving in public office in Illinois), the networks have dropped the (D) from the story. A round-up of some of the coverage, starting with Thursday’s evening newscasts:

Quinn comes in with a squeaky clean reputation at a time when the past two governors have faced serious federal charges.

An Illinois Democrat with a squeaky clean reputation?  Now that is news.  It also conflicts with assertions made by Illinois Senator Dick Durbin in 1996, when he faced Quinn in the party's primary.  The (Springfield, IL) State Journal-Register covered a February debate: 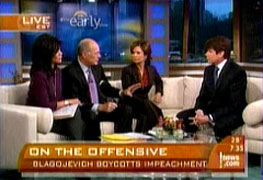 On Tuesday’s CBS ‘Early Show,’ embattled Illinois Governor Rod Blagojevich was interviewed over the course of two segments, totaling 10 minutes, and was never described as a Democrat. Co-hosts Maggie Rodriguez, Harry Smith and Julie Chen all spoke with the governor at some point and none mentioned his political party. The only acknowledgment of the governor’s party affiliation was in an on-screen graphic that featured a ‘(D) Illinois’ label. A mention of Blagojevich’s political party was similarly lacking on Thursday’s Good Morning America on ABC.

In addition to Early Show hosts failing to note that Blagojevich was a Democrat, none of them asked the governor about any discussions he had with President Obama or other administration officials about filling Obama’s vacant Senate seat. In the second segment in the 7:30AM half hour, Blagojevich declared: "I want to bring Congressman Rahm -- president's chief of staff, my congressman, Rahm Emanuel...I want to bring Valerie Jarrett, who's a high-ranking official in the Obama administration." However, there was no follow-up question to clarify the connection those Obama administration officials had with Blagojevich. Despite such a lack of journalist curiosity, Julie Chen exclaimed at the top of the show: "Blago live. He's faced Larry and Barbara, but his toughest interview is ahead this morning."

In 17 Minutes of Blago Coverage, ABC Skips the Fact that Gov is a Dem 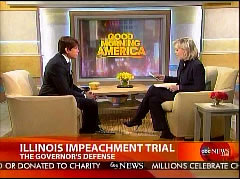 On Monday's "Good Morning America," the ABC morning show featured four segments on scandal-ridden Democratic Governor Rod Blagojevich. And over the course of 17 minutes and 38 seconds, not one host or reporter mentioned his party affiliation. Co-host Diane Sawyer interviewed Blagojevich for two segments and simply referred to him as the governor or Governor Blagojevich.

The Illinois politician, who is accused of attempting to sell the former Senate seat of now-President Barack Obama, was identified in an onscreen graphic only. It read "(D) Illinois." (A more effusive graphic, which appeared during the show's opening tease, screamed, "Illinois Governor, Live!") But neither Sawyer, nor reporter Chris Bury (who filed two additional segments on the topic), actually used the word Democrat. In fact, the only time it came up was during the second interview when Blagojevich himself referred to "my fellow Democrats." 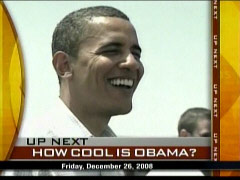 Starting this week, MRC’s Notable Quotables newsletter is evolving from a printed hard-copy product to an all-electronic Web and e-mail publication, complete with audio and video clips of the worst quotes from each issue.

Every two weeks, Notable Quotables offers a concise summary of the liberal media’s most outrageous and/or humorous eruptions, and the very best quotes are harvested once a year so the journalists can receive “awards” at our annual DisHonors dinner in Washington, D.C.

To give you a flavor of what’s in each issue, here are the most obnoxious quotes from this week’s (January 12) edition. If you've been a subscriber to the print edition, or if you’d like to sign up for our new HTML or plain-text e-mail, please go to www.MRC.org/subscriptions.

Media Research Center Director of Communications and NewsBusters.org Contributing Editor Seton Motley appeared on this morning's Fox & Friends on the Fox News Channel to discuss the egregious media double standard when it comes to Republicans and Democrats misbehaving.

Motley pointed to the media's incessant chant in 2006, the "Republican Culture of Corruption," and noted that no such parallel moniker has been affixed by the press to the Democratic Party despite a great and apparently growing number of their members having become embroiled in scandals.

The Denver Post seems to have decided that "the Lord" should not be allowed in its paper. In a January 5 report about Illinois Senator wannabe Roland Burris, the unwelcome Burris is quoted by the AP as saying "the Lord" had "ordained" that he get his Senate seat. At 3AM the Post had the full religious quote featured on its site, yet by 8PM the religious reference was purged from the story. One wonders why reference to the Lord was scrubbed from the report?

The report by David Espo of the Associated Press originally quoted Burris as saying that, "We are hoping and praying that they will not be able to deny what the Lord has ordained." Obviously, Burris is convinced that God wants him to be a Senator. (The full AP report with the religious reference can be seen here.)

Showing they have no sense of morality, no grasp of corruption and no understanding of what defines a criminal, CNN gives us another one of those ubiquitous year in review stories, this one titled "Politicians who fell from grace in 2008." In this one, CNN has decided to reveal for us their top eight politicians that found 2008 to be a "career-buster" because of their "crimes and misdemeanors" or their outrageous controversies.

CNN features corruption mired Rod Blagojevich, the sex crazed Elliot Spitzer and John Edwards, and the criminal bribe taker Ted Stevens among four others. Each of these men in the CNN list have either been convicted of criminal actions, are indicted for corruption, lost their positions, been drummed out of their party, or are soon to face jail time. Among these eight criminals, however, is a name that doesn't belong among this class of serial abuser of the public trust. It won't be shocking to note that among the worst sex criminals, bribe takers, liars and thieves in politics for 2008, CNN ridiculously included the name of Governor Sarah Palin.

Palin, however, has done nothing remotely like what these other political ner-do-wells have done. She did not take bribes, she did not indulge in sexual dalliances with co-workers or call girls, she did not get booted from her party or lose her job as Governor. She is not under indictment nor does she face jail time, yet CNN includes her in a list with Rob Blagojevich, John Edwards, Kwame Kilpatrick, Larry Langford, Tim Maloney, Elliot Spitzer and Ted Stevens.

Imagine for a moment the Senate was currently controlled by Republicans, and the white male majority leader advised Illinois Gov. Rod Blagojevich not to pick a black candidate to fill president-elect Barack Obama's vacated seat instead pressuring the governor to choose between two white candidates, do you think this would get some media attention?

Probably every hour on the hour until the white majority leader was forced to apology and conceivably resign, right?

Well, the Chicago Sun-Times reported Saturday who Senate Majority Leader Harry Reid (D-Nev.) told Blagojevich he did and didn't support concerning Obama's replacement, and irrespective of their qualifications, there was a clear racial divide in his preferences: 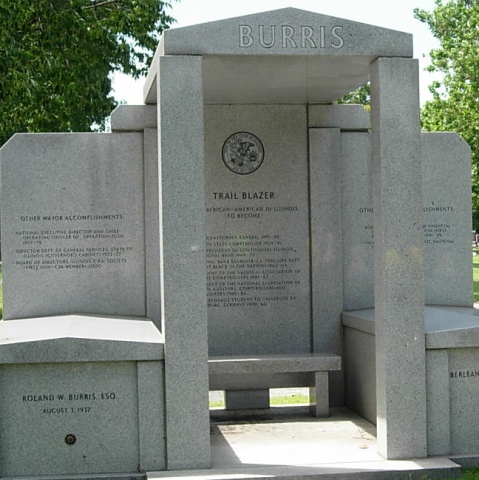 Ain't this post-racial period great?  Here we have one of the more famous members of the Black Congressional Caucus accusing Senate Democrats of threatening to act like Orville Faubus, George Wallace and perhaps the most iconic of segregationists, Bull Connor.

Bobby Rush, the former Black Panther who is now a congressman from Chicago, levelled his accusation on the CBS Early Show this morning in reaction to the letter signed by all 50 Senate Democrats declaring that they would not seat  Roland Burris, the African-American that Gov. Rod Blagojevich yesterday named to take Barack Obama's Senate seat.