Networks Skipping the Blago Retrial...As If It Were Irrelevant to Obama

Let’s not imagine Anthony Weiner was the only Democratic embarrassment of the last week. Former Illinois Gov. Rod Blagojevich was back on trial in Chicago last week “offering an enthralling and self-immolating primer on American government,” wrote former Chicago Tribune editor James Warren.

“In talking about his mulling appointing himself to Obama's senate seat, Blagojevich even said that it would have enabled him to go to Afghanistan and ‘hunt down’ Osama bin Laden,” wrote Warren. But the networks carried none of this entertaining blather. In fact, ABC hasn’t mentioned Blago since October 26, 2010. The others touched on him once each briefly in May:

CBS's Jeff Glor failed to mention the Democratic Party affiliation of Rod Blagojevich, as well as Chicago Mayor Rahm Emanuel and Rep. Jesse Jackson, Jr., during a news brief on Wednesday's Early Show. Glor's report was the only mention on the Big Three network morning shows of the former Illinois governor's lawyers calling the former Obama aide and the congressman to testify in his retrial for corruption.

The news anchor noted during his brief that "some big names could be on the stand" and specified that Blagojevich's attorneys would call Emanuel and Jackson, Jr. He then explained that the former governor is "accused of trying to sell the seat of then-U.S. Senator Barack Obama. His first trial ended in a hung jury."

According to the Chicago Tribune's Bob Secter and Jeff Coen, federal prosecutors are hoping to use an excerpt of an interview in Blago's retrial: 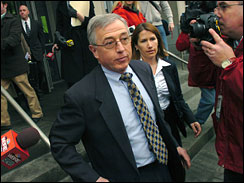 On a day in which the AP found newsworthiness in scandals involving both Democrats and Republicans, only one party was expressly identified within the articles.  Can you guess which one?

It is the grand AP tradition known as 'Name That Party' - a tradition which includes the following:

That's just a brief summary of the more recent transgressions committed by the AP.

Wolf pointed out the difference between this story and the AP’s coverage of former Detroit Mayor Kwame Kilpatrick:

Turn the page, and one could read John Schwartz's story about the latest wrinkle in the bribery and corruption case of former Alabama Gov. Don Siegelman. But in this case, Schwartz made the partisan lines clear, quickly identifying convicted governor Siegelman as a Democrat and his prosecutor as a Republican, heightening the contrast and reinforcing the paper's long-standing, unfounded suspicions of a high-level anti-Siegelman conspiracy on the part of the GOP.

A Department of Justice whistle-blower who accused prosecutors of misconduct in the closely watched federal corruption trial of former Gov. Donald E. Siegelman of Alabama has been fired, and claims retaliation is the reason. The government denies that it was retaliating.

The whistle-blower, Tamarah T. Grimes, worked as a legal aide with the team prosecuting Mr. Siegelman and Richard M. Scrushy, the former chairman of HealthSouth, on bribery and corruption charges.

Both men were convicted in 2006 in a case that Mr. Siegelman, a Democrat, and supporters say was politically motivated. Maybe it should be put to music:

Blago and Burris,
Sitting in a tree,
But they'd rather we not know their political party.

There has been yet another revelation about contacts between Democratic President Barack Obama's U.S. Senate successor, Democrat Roland Burris and former Illinois Democratic governor Rod Blagojevich over Blago's pre-Senate appointment, uh, deliberations. A released FBI audio recording reveals that Burris offered to make a campaign contribution to Blago as he lobbied to be selected.

This news has brought on yet another wave of stories that fail to tell us what party Blago and Burris belong to.

The Washington Post is the only publication that identified the party of both men in the course of reporting their story. The Post's Peter Slevin and Perry Bacon Jr. also identified the Democratic Party affiliation of the Senate Ethics Committee's Barbara Boxer: The Associated Press's determination to keep the identity of Democrats in trouble or under investigation hidden is indeed strong and persistent.

Its report (as of 11:03 p.m.; a copy is saved here at my web host for future reference) on the launch of an ethics probe into Democrat Jesse Jackson Jr.'s relationship with ousted former Democratic Governor Rod Blagojevich, particularly relating to Jackson’s bid to be appointed to the Senate seat left vacant by President Barack Obama, does not refer to Jackson or Blago as a Democrat. Any more, that's relatively unremarkable.

What is a bit more remarkable is that the underlying Chicago Sun-Times story on the impending probe refers to Jackson twice as a "D-Ill," once in the report's very first sentence and once in the picture caption copied at the top right (which, of all things, is apparently an AP file photo).

This means that AP had to proactively scrub the Democratic Party references already present in its underlying source.

Here's how the Sun-Times's story began:

Today's Chicago Tribune, taking a cue from its hero Barack Obama, gave bracketeering a try.  The contenders, all former Illinois and Louisiana public officials, were selected for a smackdown to determine the most disgraceful.

The Trib gave the nod to Edwin Edwards, although I think the competition was marred by not having an Illinois Daley in the competition.  Setting that aside, what was interesting is the Tribune didn't mention party affiliation in its bracketeering.  Seven of the eight contenders, or 87.5 percent, were Democrats.  Gee, what a surprise.

In a December post (at NewsBusters; at BizzyBlog), I reviewed ABC's online "The Faces of Political Scandal" slideshow, which featured mini-profiles of 14 politicians in recent years who have been tainted by scandal and/or crime.

At the time, I noted that:

Of the 14 politicians identified, seven are Democrats and seven are Republicans. Five of the seven GOP members are identified as such, while only two of the seven Democrats were flagged. The montage also has a couple of surprising factual errors.

Well, glory be, sometime in the past couple of months, ABC has made changes to the montage. Now each profile except for Bill Clinton's (which is excusable) identifies the politician's party. Additionally, two factual errors at the original profiles have been corrected. The year of Clinton's Lewinsky scandal which ultimately led to his acts of perjury and impeachment has been changed from 1995 to 1998, and an incorrect statement that sex-scandalized Florida Democratic Congressman Tim Mahoney had conceded to GOP opponent Tom Rooney before Election Day last year has been removed.


Here's the lineup of the "Faces of Political Scandal," and how their status changed: 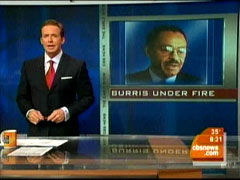 Monday morning show coverage of allegations that Illinois Senator Roland Burris may have perjured himself with respect to connections to impeached Illinois Governor Rod Blagojevich minimized calls for investigation or Burris’s resignation. On the CBS Early Show, correspondent Thailia Assuras explained: "State Republican lawmakers are calling for Senator Roland Burris to resign and be investigated for perjury...The U.S. Senate could move to expel Burris, but analysts say that's unlikely to happen. It's not the kind of distraction Senate Democrats need as they try to move forward the president's agenda."

On NBC’s Today, correspondent Lee Cowan had a similar take: "...some Republican lawmakers here are now calling for Senator Burris to resign. At the very least, some want to see a criminal investigation launched to see whether or not he perjured himself. As for his colleagues in the U.S. Senate, so far they're reserving judgment." ABC’s Good Morning America barely mentioned the controversy, only offering one 15-second news brief on the story. In addition to downplaying the issue, none of the three morning shows mentioned that Burris was a Democrat. Only the Early Show featured an on-screen graphic with ‘Illinois (D)’ next to Burris’s name while playing a clip of the Senator.

Appointed Sen. Roland Burris lied under oath to capture his seat in the Senate, but The Washington Post can't quite say that. On Sunday's front page, the paper promoted a story on A-3 with the headline "Burris Revises Story on Senate Seat."

On the home page of washingtonpost.com, a tiny headline said only "Burris Reveals Requests From Blagojevich's Circle."

Inside, the headline was "Burris Discloses Fundraising Requests: Senator Reveals Contacts With Blagojevich's Brother, Other Associates of Ex-Governor".