This week the Today show is celebrating 60 years of being on the air, and for over 20 of those years the MRC has been documenting the NBC morning show’s liberal agenda. From past anchors like Bryant Gumbel blaming “right wing” talk radio for the Oklahoma City bombing and  Katie Couric trashing Ronald Reagan as an “airhead,” up through current anchor Matt Lauer wondering how Barack Obama would “manage the expectations” of being called “The Messiah,”
MRC analysts have been documenting the worst the show has offered.

The following are 10 of the most obnoxiously liberal examples of Today show bias from the MRC’s archive; for even more bias from the Today show anchors please visit the Profile in Bias pages of Gumbel, Couric, Lauer, Meredith Vieira and Ann Curry. (Top 10 Video Countdown after the jump)

Brian Maloney at the Radio Equalizer blog reports that Rosie O’Donnell thinks cheating Arnold Schwarzenegger is somehow beneath the history of the Kennedy family – as if cheating were never allowed among the Kennedys?

Perhaps it should be said that Maria Shriver’s parents, Sargent Shriver and Eunice Kennedy Shriver, seemed to have a happy, long-lasting marriage of 56 years. But Rosie might want to be careful about boasting of a Kennedy "legacy" on this topic of womanizing:

During coverage of Arnold Schwarzengger's admitted affair on Tuesday, members of NBC's Today promoted his wife and their former colleague, Maria Shriver. Correspondent Natalie Morales declared that despite "much public scrutiny" of their marriage, "Many say it was Maria's enduring support through it all that allowed them to become one of America's most powerful couples."

Morales described Shriver as, "a member of the Kennedy political dynasty who became a network news correspondent....[then] left her long-time job at NBC News to support her husband's political career." Morales touted how Shriver's "support then, led to his landslide victory," and remarked: "Since then, the Republican foreign-born action movie star and the liberal polished member of one of America's most prestigious families, became a formidable team."

An irony-deprived George Stephanopoulos on Tuesday expressed amazement that Arnold Schwarzenegger involved himself in politics despite such a messy personal life. Yet, back in 2003, the former Clinton operative touted Maria Shriver's "stand by your man" defense of her "A+" husband.

Appearing on the October 6, 2003 Good Morning America, he marveled how it was "very similar to what Hillary Clinton did back in Bill Clinton's campaign. It's probably his best defense right now."

The pile of liberal guests (and guest hosts) on ABC's The View Tuesday led to breathless admiration and excitement all around. Washington Post TV writer Lisa de Moraes noticed that guest host Maria Shriver cooed to comedian Stephen Colbert about the liberal Rally to Restore Sanity And/Or Fear on October 30: "My daughter [Christina Schwarzenegger] goes to Georgetown and she's so excited to come to the rally. What should she expect?"

This must thrill liberal hearts, who want something (anything) that fires up liberal young people.

Barbara Walters was feeling warm and fuzzy introducing her good friend Arianna Huffington: "Full disclosure. This is a day when I have two -- with Maria and Arianna, when I have two women I have known forever. We have known each other for 30 years. [Referring to Huffington, and clutching her hand,] I am the godmother to her eldest child. So I'm slightly prejudiced." She waved around the cover of the new Forbes magazine Power Women issue, with Huffington on the cover. 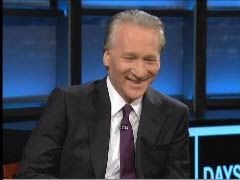 As the actor Richard Tillman – brother of former Army Ranger and former NFL player Pat Tillman – appeared as a guest on HBO’s Real Time with Bill Maher on Friday promoting the film "The Tillman Story" about his brother’s death in Afghanistan, host Maher played a clip from Pat Tillman’s funeral in which Richard Tillman mocked the religious references made at the funeral by speakers Maria Shriver and John McCain. Maher went on to praise Richard Tillman as having "a lot of balls" for his words as there was also moderate applause from the audience.

Maher set up the clip: "But, you know, they had Maria Shriver and John McCain... Speaking there, and Maria said, "Pat, you are home. You are safe." And McCain said, "You will see Pat again when a loving God reunites us all with our loved ones."

Then came a clip of Richard Tillman speaking at the funeral while nearly crying: "Thank you for coming. Pat’s a f------ champion and always will be. Just make a mistake, he’d want me to say this. He’s not with God. He’s f------ dead. He’s not religious. So thanks for your thoughts, but he’s f------ dead."

After applause from the audience, Maher responded, "That’s a lot of balls, my friend."

Glamour Flies Liberal Flag with ‘Women of the Year’ List

By Colleen Raezler | November 11, 2009 9:58 AM EST
Women's magazines notoriously promote their ideal woman: thin, stylish, beautiful, sexually adventurous. And after seeing who Glamour named as its annual "Women of the Year," readers can now add "liberal" to the list of ideal qualities.

Cindi Leive, the magazine's editor-in-chief told NBC's Matt Lauer on Nov. 9, that the "common thread" between the women chosen was that "they're not just achieving for themselves, they're really expanding our understanding of what women can accomplish in this world, and that's a great message for young women."

CMI researchers however, found another "common thread" between a majority of the women - they are liberals in good standing, with a record of support for liberal politicians or causes. 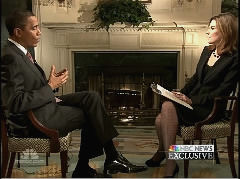 Tied to NBC's promotion of Maria Shriver's “A Woman's Nation” report, completed in conjunction with the left-wing Center for American Progress, Wednesday's NBC Nightly News showcased Savannah Guthrie's interview with President Barack Obama in which she trumpeted how he “has put women in high places in his administration and the Supreme Court. The first bill he signed, a pay discrimination law.” Plus, she assured viewers “the President says he gives a lot of thought to whether the women who work here in the White House feel they're being heard, whether there are those persistent subtle biases still around.”

NBC gave air time for Obama to pander: “When I think about policy, I'm constantly thinking about how can we strengthen families, how can we provide more resources, greater flexibility so that women can thrive, because I think if women are thriving everybody's going to be thriving.” How profound.

But no more banal than Guthrie explaining Obama sat down with her “to talk about the Shriver Report and its finding that a workforce that's half women 'changes everything.'” As if that workforce composition is somehow new this week. Indeed, the title is just that silly, “The Shriver Report: A Woman’s Nation Changes Everything.”

Guthrie also touted: “For the President, that woman's nation starts at home.” And: “The President says he can relate to what the report calls the negotiation between the sexes.” 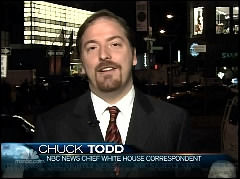 ABC, CBS and NBC on Tuesday night all aired stories on President Barack Obama hobnobbing with the wealthy during a recession, at Manhattan fundraisers to be attended by the very Wall Street players he's condemned. But only NBC's Chuck Todd served as a mouthpiece for self-serving rationale which painted Obama as a victim of an image of perfection susceptible to “any speck of mud,” as Todd relayed from outside a Manhattan hotel:

One Democratic strategist said that part of the President's problem is simply his own expectations. Some of the rhetoric he said on the campaign trail made it seem as if he was coming into office in a clean white suit. So now any speck of mud -- like raising money from Wall Street donors -- shows up a lot clearer than if he came in just as another politician wearing just another gray suit. [Audio: MP3 clip, video below jump]

(Didn't Joe Biden get in trouble back in 2007 for describing Obama as “clean”?)

Minutes after Todd, NBC Nightly News viewers learned Obama is also quite an expert on women since he's supposedly “perhaps the man who knows the most about what it's like to live in a women's nation, work in a women's nation, and get elected by a women's nation,” liberal activist Maria Shriver touted in plugging an interview with Obama for her “A Woman's Nation” series: