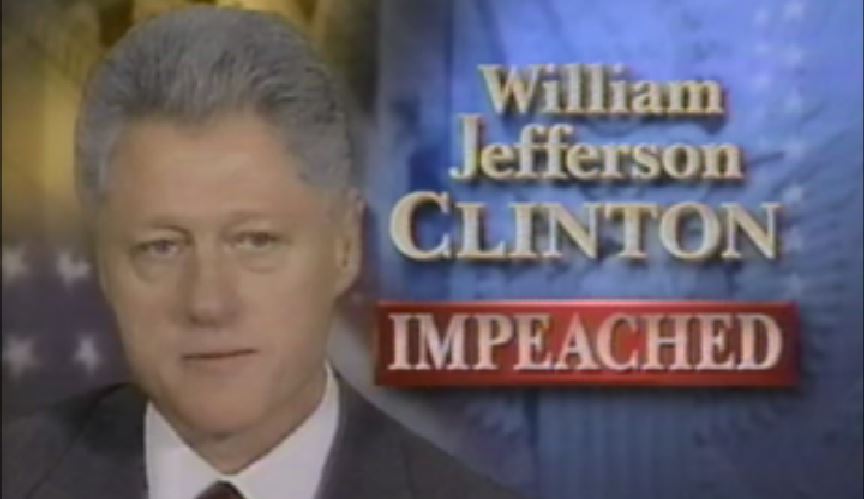 In recent days, journalists have mocked Republicans who’ve switched from impeachment advocates in the 1990s to impeachment foes today. But the news media have undergone a similar metamorphosis. The difference is, Republicans (and Democrats) are understood to be political partisans, while the media are ostensibly supposed to be non-partisan. But the record on impeachment shows that journalists are just as partisan as the politicians they cover.

Now, the news media are enthusiastically champions of the Democrats’ impeachment push against President Donald Trump, donating dozens of hours of free airtime to the cause. There’s no disguising their agenda: network news analysts have applauded the anti-Trump effort as “exactly what the Framers contemplated” when they devised impeachment, while one of CNN’s prime time hosts insisted that any Republicans who don’t join with Democrats in pushing the President out of the White House are “ignoring their oath” of office.

But 21 years ago, the same news media was enraged by the House vote to impeach a Democratic President, casting it as a “legislative coup d’etat” and a hateful act from “infuriated” Republicans who wished only to “torture” President Bill Clinton. Journalists warned then that impeachment would lead to the “sham” and “spectacle” of a Senate trial where acquittal was all-but-certain. Republicans, they threatened, would be the real victims of a potential public “backlash.” 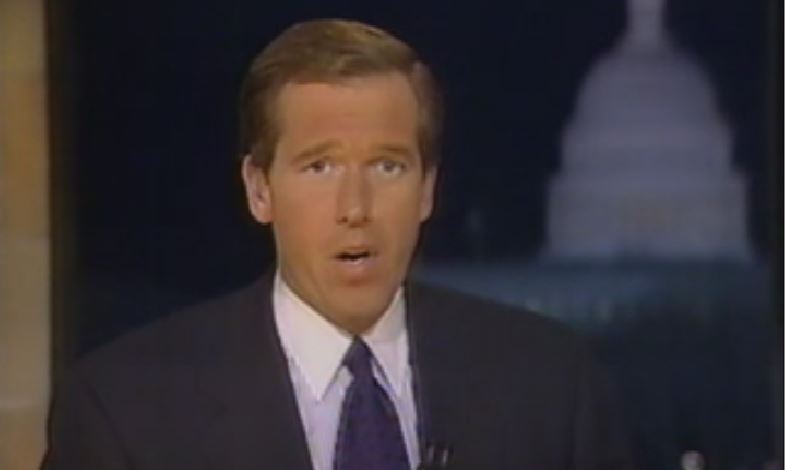 ■ “A Mark Against the Congress.” When the House voted on December 19, 1998 to approve two articles of impeachment against Clinton, outraged journalists cast it not as a stain on the President’s conduct, but on the Congress which voted to hold him accountable. “Historians may not look kindly on what transpired behind me here today,” NBC Nightly News weekend anchor Brian Williams intoned that evening from Capitol Hill.

Hours earlier, during her network’s live coverage of the vote, NBC’s Maria Shriver scolded that the vote was “a mark against this Congress, and this Congress will be forever known as the Congress that impeached the President of the United States.”

Three days later, CNBC host and Clinton fanboy Geraldo Rivera popped up on NBC’s Today show (with “NBC News” under his name as his identifier) to blast away at the vote: “It was a spiteful action....It was a legislative coup d’etat, and it has been rejected utterly by the American people....”

■ Defying the Public: The Democratic campaign against President Trump has failed to budge public opinion since impeachment hearings began November 13, with some polls actually showing a modest boomerang in Trump’s favor.

But 21 years ago, the public’s lack of support for Clinton’s impeachment was used by the media as a club against Republicans. As the House vote loomed, reporters pushed back. “According to polls, the public is really coming away saying, ‘we are sick of it, get it over with,’” co-host Lisa McRee lobbied on the December 1, 1998 Good Morning America.

Then on the December 10 Nightly News, NBC’s Jim Avila warned that Republicans faced “potential backlash from a public suddenly awakened by an impeachment they say they don’t want.”

The next night on World News Tonight, ABC’s Dean Reynolds hit the same point: “There seems to be more impatience with the babbling pundits and the squabbling Congressmen than outrage over the President’s actions....As the impeachment train moves along most of the public, it seems, is not on board.”

And on the December 13 edition of ABC’s This Week, Cokie Roberts condemned the impeachers: “But you could equally say the Republican Party has not listened to the will of the people on something that is so central to where the voters are.”

■ Republicans Are Disgracing Themselves: In the days before the House vote, the media cast it as a partisan effort by Republicans who would suffer the consequences. “I think that the Republicans are going to pay a price for this hard line attitude,” New York Daily News columnist Steve Roberts asserted on CNN’s Late Edition on December 13. “Henry Hyde himself said they would never do this along partisan lines, the House would be disgraced if they did it along partisan lines, and that’s exactly what they’re doing.”

And on the December 12 edition of The McLaughlin Group, Newsweek’s Eleanor Clift blasted the GOP: “If the Republicans want to go ahead and do this, I think they disgrace themselves in a more profound way than President Clinton has by abusing the machinery of impeachment, knowing full-well that the Senate will hold a sham trial and they will be in effect delivered of this ridiculous conclusion they’ve come to.”

■ Driven by Their Hate: Journalists cast the House vote as motivated by Republicans’ psychological dislike of Bill Clinton, rather than concern for his perjury and obstruction of justice. CNBC’s Rivera, on his December 7 Upfront Tonight program, cast the prospective House vote to impeach this way: “So infuriated by everything from Clinton’s evasive answers to his pro-choice politics, they are about to do something that has not been done for 130 years.”

Later that same night on Rivera Live (yes, CNBC gave him two different nightly shows to promote his views), Rivera tossed this softball to Clinton’s lawyer, Bob Bennett: “What drives this ideology? Hatred of this man?”

Viewers heard the same sentiment on CBS December 13, when Face the Nation co-host Gloria Borger asked Clinton’s chief of staff John Podesta: “Chairman Hyde says he’s acting out of what he calls a constitutional duty. Do you think there’s something else going on here? Are they out to get the President?”

And after the vote, on ABC’s World News Tonight on January 5, Cokie Roberts blamed the inability to come to an agreement on “conservative Republicans who just want to torture the President for as long as they humanly can.”

■ Fight, Bill, Fight: Instead of cheering on those in Congress trying to hold the President accountable for his actions, some reporters actually implored Clinton to be even more adversarial.  At the top of the December 13 This Week roundtable ABC’s Sam Donaldson fretted: “Many reporters who’ve covered the President all during the scandal, and who may have been pretty tough on him, are almost today beseeching the White House to get out there and fight, or wondering why at least he doesn’t....It seems to a lot of us that he’s almost given up.”

Can you imagine any of today’s journalists encouraging Donald Trump to fight even harder against the Democrats’ impeachment?

■ Yearning for an Escape Hatch: Both before and after the House vote, journalists were clamoring for an alternative that would help Clinton avoid a trial in the Senate. As early as December 4, Time magazine’s Frank Pellegrini, in an online post, urged readers to start lobbying Congress: “If the House forwards articles of impeachment, there are only two ways the Senate can get out of it — a two-thirds vote to suspend the rules, or a motion-to-end trial by a Senate juror, decided by a simple majority....So attention, jaded American public: Write a letter. Take a poll. The next two weeks are your last chance to save the Spring.”

On December 9, CNBC’s Rivera (Upfront Tonight) insisted on a vote on censuring Clinton as a way for the President to slip the impeachment noose: “If those leaders do not allow your elected representatives the option of voting on censure or impeachment, then they have robbed — they have robbed from you, make no mistake about it — they have used a procedural device to steal from you your right to be democratically represented on the floor of the House of Representatives! They have stolen that from you!”

Four days later on Face the Nation, CBS’s Bob Schieffer said it would be “unfair” not to give Democrats what they wanted: “If Republicans don’t allow Democrats to at least have a vote or a debate on censure isn’t it going to leave a sense of unfairness. Aren’t people going to say they’re just trying to cut off the Democrats and this whole thing is unfair?”

Hours after the House vote on December 19, NPR’s Nina Totenberg appeared on Inside Washington and wailed about the prospect of a trial: “Didn’t I say to you that we are marching off the cliff? Reason tells you we should stop this and get on with the business of governance....At the moment everybody’s fondest hope is that the two week hiatus, between now and the new year, in that period impeachment will sink in and sanity will prevail and we’ll avoid a trial.”

The next morning on NBC’s Today, co-host Jodi Applegate asked New Jersey’s Democratic Senator Frank Lautenberg if there was any hope of avoiding the “spectacle” of a trial: “Are you confident that a deal can be worked out to avert the spectacle of a trial?”