NewsBusters Year-in-Review: The Most Outrageous Quotes of 2016, Part I

As 2016 comes to a close, this week NewsBusters will be recounting the most obnoxious liberal bias of the year. Today’s installment: the most outrageous examples of journalists fawning over liberal or left-wing icons, including Barack Obama’s “keen intelligence,” the “fundamentally honest” Hillary Clinton, and the “tremendous sense of pride” Cubans supposedly feel for their dead dictator, Fidel Castro.

Correspondent Joy Reid: “If you look at Hillary Clinton’s qualifications, I mean, my God, since the Founding Fathers, has anyone tried run for president with more on their resume?”
Host Andrea Mitchell: “John Quincy Adams, maybe.”
Reid: “Maybe John Quincy Adams. True, true, true. Jefferson, Adams, I mean you have to go back literally to the 18th century to find somebody with a more packed resume than Hillary Clinton.”
— Exchange on MSNBC’s Place for Politics, April 8.

“Madame Secretary, last night when you took stage in Sacramento, there was a woman standing next to me who was absolutely sobbing. And she said, you know, ‘It’s time. It’s past time.’ And you see the women — you see people here and people just come up to you and they get tears in their eyes. Do you feel — do you feel the weight of what this means for people?”
— NPR’s Tamara Keith to Clinton at a June 6 press availability shown live on CNN Newsroom.

“This is a moment, and I hope we take a moment — I hope we pause not only to think about how this is historic and unprecedented for her, for women, but about all the people that made this moment possible: all the women who went before her; all the women whose shoulders she stands on; and I think that this is a big moment for the country, for anybody who has had a mother or a daughter or a sister, and I think she deserves that moment.”
— NBC News special correspondent Maria Shriver during MSNBC live coverage, June 7.

“We went into the GMA vault and found your first appearance here on Good Morning America in 1988....You were speaking out about your lawyer and talking about equality and such....For as long as we can remember, seeing you in the spotlight, and you have been fighting for others.”
— Co-host Robin Roberts to Clinton at a town hall event on ABC’s Good Morning America, April 21.

Vouching for the “Honest and Trustworthy” Hillary Clinton...

“I would be ‘dead rich,’ to adapt an infamous Clinton phrase, if I could bill for all the hours I’ve spent covering just about every ‘scandal’ that has enveloped the Clintons. As an editor I’ve launched investigations into her business dealings, her fundraising, her foundation and her marriage. As a reporter my stories stretch back to Whitewater. I’m not a favorite in Hillaryland. That makes what I want to say next surprising. Hillary Clinton is fundamentally honest and trustworthy.”
— Former New York Times Executive Editor Jill Abramson in March 28 Guardian column: “This may shock you: Hillary Clinton is fundamentally honest.”

...But Let’s Not Talk About Her Scandals

Trump supporter Gina Loudon: “What I think is reprehensible is you take someone like Hillary Clinton, who has basically danced on the assaults of women — that are dozens of women, by the way — that her husband has maligned and assaulted, paying Paula Jones off $850,000 for hush money.”
Anchor Brooke Baldwin: “Okay, let’s not go there....I think the Clinton camp would point to, you know, her resume of lifting women up through the years.”
— Exchange on CNN’s Newsroom with Brooke Baldwin, May 16.

“I want to ask you about a moment at the town hall the other day. A young man, a Bernie Sanders supporter, stood up and said young people don’t trust you....And when he said that, I winced. And I was wondering, you’ve obviously been in tough battles, political battles, but do you get your feelings hurt sometimes?”
— Anchor Lester Holt to Hillary Clinton on NBC Nightly News, January 29.

Appreciating the Greatness of Barack Obama

PBS’s Charlie Rose: “I want to raise two big issues about him that are fascinating to me and, Jon, all of you. How smart is he? What’s the sense of — is he one of our brightest presidents?”
Longtime Newsweek editor Jon Meacham: “I think so, absolutely. I think so, and I think it has all of the pluses and minuses of that.
Rose: “I’m asking from a real standpoint.”
Meacham: “It’s a keen analytical intelligence.”
— Exchange on Charlie Rose, January 12. 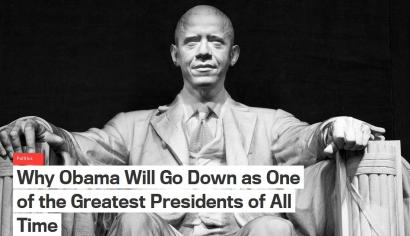 “Wait. One of the Greatest?...Like 20-Dollar Bill great? Like Mount Rushmore great? Yep. (We just won’t build Mount Rushmores anymore.) In so many ways, Obama was better than we imagined, better than the body politic deserved, and far, far better than his enemies will ever concede....We’ll look back at history, hopefully when we’re zooming down the Barack Obama Hyperloop Transport System, and think: That man was rare. And we were damn lucky to have him.”
— GQ editor-in-chief Jim Nelson in an April 14 online article “Why Obama Will Go Down as One of the Greatest Presidents of All Time: Already missing our soon-to-be-former POTUS.”

“Really, has there been any President cooler than Obama?”
— May 10 tweet from Newsweek’s official Twitter account, plugging an online piece on whether Barack Obama is “the first pop culture President.”

Host Charlie Rose: “How do you think he’s [Barack Obama] been as president?”
Actress Amy Schumer: “I love him. I’m gonna miss him so much. I’m so sad.”
Rose: “What are you gonna miss? The style? The intelligence?”
— Exchange on PBS’s Charlie Rose, August 19.

“[Barack Obama] invoked the audacity of hope, all of the spirit, all of the creativity of his own brilliant speech writing....I don’t think we’ve ever had a President, save Lincoln, who is as great a speechwriter as this man.”
— Correspondent Andrea Mitchell following Barack Obama’s speech as aired on MSNBC’s live Democratic convention coverage, July 27.

“It’s hard, frankly, to stop quoting from his [Barack Obama’s] remarks because they amounted to one of the most moving, inspiring valentines to this country that I’ve ever heard, brimming with regard for it and gratitude to it. We’re going to miss this man, America. Whatever his flaws, he’s been more than our president. Time and again, he’s been our national poet.”
— New York Times columnist Frank Bruni in July 28 piece, “Freedom from Fear.”

“Well, it’s pretty well known I’ve always gone for this guy [Barack Obama]. I’ve liked the way he speaks about our country, from the time I first heard him in 2004 up in Boston at the convention....It was magnificent....He has that Julia Roberts smile of his that he saves and when he does it, you can’t resist the guy.”
— Hardball host Chris Matthews during MSNBC’s live Democratic convention coverage, July 27.

History Will “Fondly” Remember the “George Washington of His Country”

“It’s very easy to have a simplistic view, that he was all awful for Cuba and the world, and I just don’t think that’s accurate. I think that the Cubans have a tremendous sense of pride over his legacy, and I think that he will be remembered fondly.”
— FNC’s Geraldo Rivera on Fox & Friends, November 27, talking about the death of Cuban dictator Fidel Castro.

“Even Castro’s critics praised his advances in health care and in education....Fidel Castro was considered, even to this day, the George Washington of his country among those who remain in Cuba.”
— Correspondent Jim Avila during ABC News coverage of the former communist dictator’s death early in the morning of November 26.