In a report for Wednesday’s NBC Today, Special Anchor Maria Shriver praised Salesforce CEO Marc Benioff as an “amazing leader” who was “changing the world for the better.” As evidence of his supposed “inspiring” and “groundbreaking” leadership, she touted his left-wing intimidation tactics against states that enacted religious freedom laws.

Interviewing Benioff for the segment, Shriver noted: “You also said employees want to have a meaningful experience at work.” The liberal billionaire gushed: “You see that with millennials....Before, business was just about the product. Now, business is about something much greater.”

Shriver chimed in to explain that “purpose” to viewers:

Like fighting for social justice and equality. When Indiana and Georgia proposed laws that would discriminate against LGBT people, Benioff threatened to pull thousands of employees out of those states, and the bills were vetoed.

In 2015, the Today show was part of the liberal media crusade to attack any state that attempted to protect religious liberty:

On Wednesday, Shriver also rightfully cheered the work of Brooklyn middle school principal Nadia Lopez for helping to educate and inspire her students. A far more noble effort than some wealthy liberal businessman using his money to attack religious conservatives.

Insisting that Benioff’s political activism was on the same level as the work Lopez was doing, Shriver proclaimed: “These innovative thinkers, finding meaning in their own lives by inspiring change, one person, company, and community at a time.” She later added: “I’m so inspired by both of these people because they’re just – they don’t see a box. They just want to do things differently and they’re having great success. So that’s exciting.”

If you’re a rich liberal elitist who uses his power to bully people you disagree with, NBC will celebrate you as a hero.

Here are excerpts of the February 28 report:

SAVANNAH GUTHRIE: Well, we always love to hear what Special Anchor Maria Shriver is thinking about. And in her new book, which is called, I’ve Been Thinking, she shares some inspirational thoughts and prayers and messages, and it’s all about living a meaningful life.

CARSON DALY: And to celebrate great thinkers, she interviewed two of the country’s best for us, people who making a huge difference. Maria, good morning.

MARIA SHRIVER: Good morning to both of you. Well, you’re about to meet two amazing leaders who are breaking the mold with their thoughts, finding meaning in their own busy lives by inspiring others, and changing the world for the better.

He leads a multibillion-dollar company in Silicon Valley. She leads a middle school in one of the roughest hoods in Brooklyn. But what unites these leaders from very different worlds are their groundbreaking thoughts.

NADIA LOPEZ [MIDDLE SCHOOL PRINCIPAL, BROOKLYN, NY]: To lead is to have the audacity to challenge and disrupt.

MARC BENIOFF: What do you stand for? Are you committed to improving the state of the world?

SHRIVER: Marc Benioff is CEO of Salesforce, one of the world’s leading tech firms, providing software to over 150,000 companies.

SHRIVER: He says building that trust also means giving back to the community. In his company’s innovative 1-1-1 model, 1% of their profits go to charity, 1% of products are donated to non-profits, and employees spend 1% of their work hours volunteering.

BENIOFFF: When I think about a meaningful life, for me, of course, it’s about love. It’s also about fulfillment. There is no success without fulfillment. That is really important. It’s not about a financial success. 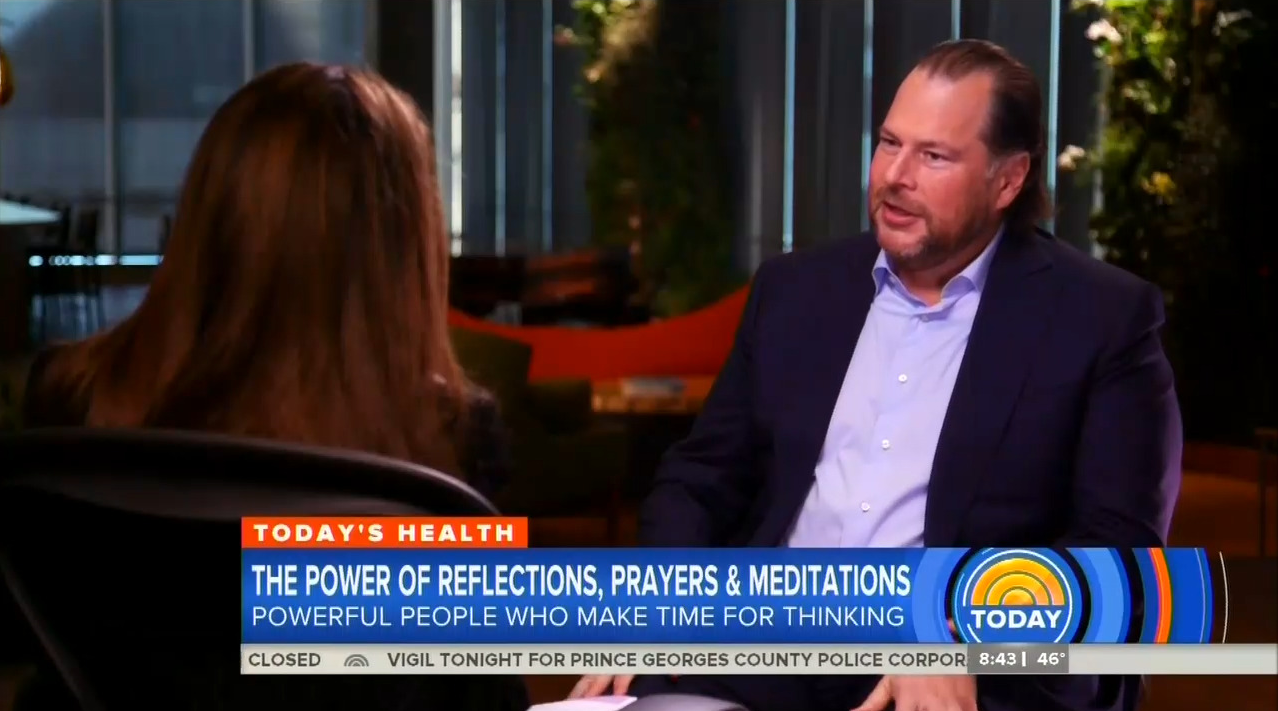 SHRIVER: You also said employees want to have a meaningful experience at work.

BENIOFF: You see that with millennials. They know they have a purpose and they know that they want Salesforce to have a purpose, as well. Before, business was just about the product. Now, business is about something much greater.

SHRIVER: Like fighting for social justice and equality. When Indiana and Georgia proposed laws that would discriminate against LGBT people, Benioff threatened to pull thousands of employees out of those states, and the bills were vetoed. Here at Salesforce, when an internal assessment found female employees were being paid less than males for the same work, Benioff spent millions closing the pay gap.

BENIOFF: I believe that this is happening at every company and that we all have to look for greater levels of equality in our organizations.

SHRIVER: These innovative thinkers, finding meaning in their own lives by inspiring change, one person, company, and community at a time.

LOPEZ: We are all able to be leaders. Every single one of us.

GUTHRIE: It’s so inspiring. It’s like the opposite of distracting ourselves, but actually trying to be mindful and thoughtful.

SHRIVER: I’m so inspired by both of these people because they’re just – they don’t see a box. They just want to do things differently and they’re having great success. So that’s exciting.

GUTHRIE: Maria, we love it when you’ve been thinking.