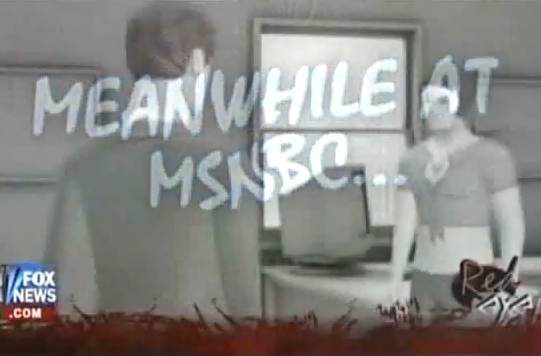 Greg Gutfeld and the gang from "Red Eye" tore David Shuster apart Saturday morning as they imagined how the MSNBCer must have reacted to Tuesday's PPP poll declaring Fox the most trusted name in news.

After discussing some of the numbers, Gutfeld said he felt sad for the other networks, "especially for the folks at MSNBC like David Shuster."

"I wonder how he took the news," Gutfeld said as the screen morphed into Robot Theater with "Meanwhile At MSNBC..." boldly displayed (video embedded below the fold with partial transcript): 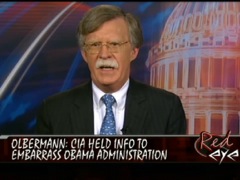 Olbermann suggested that the CIA and other agencies might have been engaged in some sort of turf war, and allowed the plot to move forward. He insinuated that there was "at least a possibility somebody understood how serious this could be and yet withheld information to make some other part of the counterterrorism system look bad".

Bolton, speaking on the late night Fox News show Red Eye, said Olbermann was making accusations of attempted murder against American intelligence officials. He noted that Olbermann carefully crafted his accusations to avoid legal complications, but that the libtalker's point was quite clear. 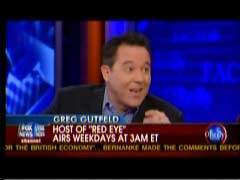 On Friday’s The O’Reilly Factor on FNC, during the regular "Dumbest Things of the Week" segment, host Bill O’Reilly and guest Greg Gutfeld of FNC’s Red Eye, possibly picking up on an item posted the day before on Newsbusters, highlighted ABC’s The View co-host Joy Behar’s recent defense of Tiger Woods as she opined that at least the golf star is not being a "hypocrite" like "one of these pro-marriage, right-wing kind of guys who is anti-gay."

After playing a clip from The View, Gutfeld responded: "I just can't believe she's still single. What a catch. ... This angers me, one, that she says that if you're a conservative you're anti-gay, which is bigotry, her own form of bigotry. Number two, she insults the left. She's saying that the left, because they have no standards, cannot be hypocrites. Therefore, they can get away with things."

Below is a transcript of the relevant portion of the segment from the Friday, December 4, The O’Reilly Factor on FNC: 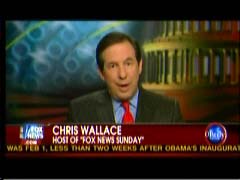 On Friday’s The O’Reilly Factor on FNC, as host Bill O’Reilly and Fox News Sunday host Chris Wallace discussed recent comedy directed at President Obama and the First Lady – including a re-dubbed clip of Sesame Street’s Big Bird grilling Michelle Obama from the Tonight Show with Conan O’Brien – Wallace opined that he hopes that there would be more such comedy and that the Obama’s should be treated by comedians like "regular public figures and not as something heaven sent."

He also lambasted the "idiocy" he saw on CNN as the Situation Room recently fact-checked a Saturday Night Live skit that took jabs at President Obama. Wallace: "I mean, here, the idiocy of CNN doing a fact check on Saturday Night Live's send up of Barack Obama, the fact is that is what comedians should do. They should make fun of the people in power."

Later in the show, O’Reilly brought aboard FNC’s Greg Gutfeld -- host of Redeye -- and Juliet Huddy to talk about the "dumbest things of the week," and Gutfeld presented his choice of the CNN fact-check, pointing out CNN’s double standard in its treatment of conservatives: "But they never did this when Will Ferrell went out and did Bush or when Tina Fey did Palin. They never analyzed when Republicans were parodied, but somehow when Barack Obama is parodied, they're shocked. They're incredulous. It's amazing to me."

CNN and Campbell Brown must be awfully proud of themselves.

After all, Brown's prime time television program which airs at 8PM ET is getting fewer viewers between the ages of 25 and 54 than Fox New's "Red Eye."

Here's the punch line: "Red Eye" is on at 3AM when most people in the country are asleep.

This deliciously came hours after the "Countdown" host bashed former Nixon administration figure Chuck Colson for having the nerve to speak out in favor of California's Proposition 8 which defined marriage as a union between one man and one woman.

What really caught the ire of Gutfeld and company was a false assertion Olbermann made on air Wednesday about what transpired on a recent "Red Eye" (video embedded right, partial transcript below the fold):

In an e-mail conversation today with Greg Gutfeld, the Fox News Channel "Red Eye" host pointed out to me that he joked about cannibalism as a solution to environmental woes, and this, mind you, months before Ted Turner came out clucking about how global warming will make us all cannibals.

Some might say Gut is a voice crying in the late night wilderness, but maybe he actually is a prophet. From his July 20, 2007 item at HuffPo (emphasis mine):

Many of our most thoughtful environmentalists are telling us that our planet is facing an unfathomable calamity. The combination of unbridled overpopulation and increasing greenhouses gases puts us on a path to destroy Mother Earth...unless we do something now. [...]

I have examined this problem closely and realize there is a simple answer to this dilemma. If overpopulation and consumption of animals cause major harm to our planet, then we can simply eradicate both threats through cannibalism.

Let's eat each other.