Washington Post columnist Max Boot freaked out over the world’s richest man potentially buying Twitter. The reason? A buy out might hurt his dream to increase censorship on the platform. 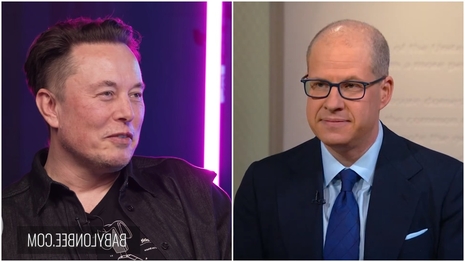 Boot had a complete meltdown in an April 14 op-ed headlined “Elon Musk is the last person who should take over Twitter.” Boot’s main gripe with Musk’s plan to buy out Twitter was that Musk, “who calls himself a ‘free-speech absolutist’” was dangerous to American democracy. “Anyone who thinks the problem with social media is too much content moderation, rather than too little, should not own one of the most powerful platforms online.”

In other words, according to Boot the problem is that Twitter doesn’t censor enough!

Boot even tried to mock Musk for being the “world’s richest troll.”

One of Boot’s tweets criticizing Musk’s potential takeover of Twitter went viral. “I am frightened by the impact on society and politics if Elon Musk acquires Twitter. He seems to believe that on social media anything goes. For democracy to survive, we need more content moderation, not less.”

I am frightened by the impact on society and politics if Elon Musk acquires Twitter. He seems to believe that on social media anything goes. For democracy to survive, we need more content moderation, not less.

Fox News host Greg Gutfeld explained that content moderation is a “euphemism for censorship” on the April 15 edition of his show.

But Boot, displaying his thin skin, wrote in his op-ed that the backlash against his tweet was “hyperbolic.” He pointed to Rep. Marjorie Taylor Greene’s (R-GA) response to his tweet as an example. “Kill freedom of speech to save democracy? Say you’re a communist.”

Kill freedom of speech to save democracy?

You’re terrified of the impact on politics when truth isn’t censored.

I’m offended by your weakness. https://t.co/qnKwbttg0W

The liberal media’s reaction to the news was even more shrill and extreme. Leftist outlet Axios called Musk a “goblin” and “a very dangerous beast.”

Boot did not resist the urge to name-call his critics. “Thank you for making my point, trolls,” he wrote. Then, he hypocritically characterized those who dared to disagree with him as pushing “conspiracy theories” and “name-calling."

Boot repeatedly dismissed criticism of censorship in his article. The “notion that content moderation is communism or fascism is typical of the inanities that pervade social media.”

Some experts disagree with Boot’s faith in so-called “content moderation.” Nebraska College of Law professor Kyle Langvardt wrote that a system which trusts a small cadre of people to enforce free speech rules online “sits in tension with an American free speech tradition that was founded on hostility” toward too much outside interference.

Boot might also want to read the op-ed, “Anonymous criticism helped make America great,” published in the very newspaper he writes for, The Washington Post. Indiana University Bloomington lecturer Jordan Taylor defended free, anonymous speech. “[A]nonymous publication” has allowed “vulnerable voices to participate in public politics and speak truth to power.” And many of the Founding Fathers wrote under pseudonyms during the American Revolution, he added.

But those were just the Founding Fathers — what would they know?