As NewsBusters reported Tuesday, syndicated columnist and ABC News contributor George Will created quite a firestorm last week with his call for American troops to be pulled out of Afghanistan.

Readers are encouraged to review the article in question as well as the criticisms here.

On Sunday, at the beginning of the panel segment of ABC's "This Week," Will took on his critics by reading a letter he received from Marine Commandant General Charles Krulak (video embedded below the fold):

Will Gets Hit From Both Sides for Advising Afghanistan Withdrawal

Syndicated columnist and ABC News contributor George Will must have known the firestorm that would be set off when his "Time to Get Out of Afghanistan" was published.

As a highly-respected conservative writer who's even held with some esteem by folks on the left, Will surely knew he was expressing a very unpopular position.

Yet, he still wrote it.

Subsequent to its contents being leaked before it appeared at the Washington Post, it seems a metaphysical certitude many NewsBusters readers heard about the piece and likely read opinions of it, but may not have taken the time to review it in its entirety.

Please do so, and then read what others have said about it (in no particular order):

In light of recent reports that Vice President Cheney had ordered the CIA to withhold information about a counterrorism program that was being planned during the Bush administration, on Sunday ABC’s George Stephanopoulos on both Good Morning America and on This Week suggested that the revelations may be "vindication" for House Speaker Nancy Pelosi, or that they at least "bolster" her claims about the CIA lying to her. Stephanopoulos even seemed to be pushing Pelosi to claim "vindication" even while the Speaker’s office was reluctant to do so. Stephanopoulos, from Good Morning America: "I spoke with Speaker Pelosi's office about that, and they don't want to use the word "vindication," but, clearly, it does bolster their case that on several occasions, they were either misled or not given relevant information that the Congress was supposed to have."

During the roundtable discussion on This Week, after conservative columnist George Will brought up the danger of leaks by members of Congress, since congressional members leaked the current story, Stephanopoulos again suggested the story helps Pelosi: "And part of the reason they wrote those letters was in defense of the Speaker, Nancy Pelosi ... they said that they had been misled, and, of course, the Speaker had said the CIA has lied to us on many occasions. I think she said they lie all the time. So this is a measure of vindication, I suppose, for the Speaker, even though she doesn't want to claim it."

During the roundtable discussion, it was left to Will to point out not only that the program "remained in the planning stages," but that the law Democrats are alleging may have been broken has a loophole, suggesting that withholding information on the program may have been legal. Will: 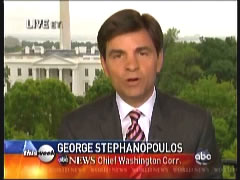 "I’ve always been struck by how -- and it’s not too strong a word -- how obsessed the President and the White House are with Fox News."

So said ABC's George Stephanopoulos during the Roundtable segment of Sunday's "This Week."

With an on-screen chyron shockingly asking, "Free Media Ride For Obama?" the former member of the administration exceedingly paranoid of what it declared was a vast right-wing conspiracy actually discussed with his guests the fawning coverage the current White House resident is getting from the press.

Marvelously, George Will, for the second week in a row, did not disappoint (video available here, partial transcript follows):

As President Obama tours the country advancing his universal healthcare initiative, there are some dirty little secrets that he and his minions in the media don't want Americans to know.

On Sunday, George Will during the panel discussion on ABC's "This Week," exposed some inconvenient truths about this controverial subject that would likely change much of the public's view if they were regularly made aware of them. 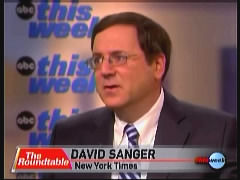 Asked by George Stephanopoulos to name the “most important thing we've learned” about President Barack Obama during his first one hundred days in office (which is still three days away), David Sanger, a Washington correspondent for the New York Times, asserted: “I think we've learned that he's more moderate than we had expected.” That says a lot about the mindset of New York Times reporters and prompted George Will to retort, during the roundtable segment on ABC's This Week: “He's less moderate than I thought. He's going to design our cars. He's going to design our light bulbs. He's going to tell us where our house shall be built. This is supervisory liberalism in the most nagging, annoying sort.”

Bob Schieffer brought aboard CBS's Face the Nation the Washington Post's Bob Woodward and Tina Brown, Editor-in-Chief of The Daily Beast site, to assess Obama. Brown could barely contain herself, trumpeting “what a force-multiplier Michelle Obama has turned out to be” as she and her husband work in “flawless concert,” so while “the world is talking about torture and the Bush administration, then we have Michelle with her vegetable garden. Talk about Spring time in America!”

She's been popping up in a lot of places lately to chime in on the economy.

This time Huffington Post editor-in-chief Arianna Huffington appeared on ABC's April 5 "This Week," where she voiced her disapproval of the March 30 decision by the Financial Accounting Standards Board (FASB) relaxing mark-to-market accounting rules.

"This week, we saw so many concessions to the banks," Huffington said. "We saw the suspension of mark-to-market, which is absolutely tragic. Japan, by not having mark-to-market, made it much harder for them to recover."

But as Brian Wesbury and Robert Stein of First Trust Portfolios recently wrote for Forbes magazine, mark-to-market accounting reinstitution was reinstated only in recent years. The last time it was in effect - during the Great Depression - it caused many bank failures.

'Nobody Knows The Outcome, So The Most Important Thing Is Speed'

Who cares if we're like Bill Murray in Groundhog Day, careening in his pickup toward the brink of the rock quarry?  At least we're moving fast!

That seemed to be Claire Shipman's logic in urging speed in the implementation of the stimulus plan. The ABC correspondent made her curious comment today during the roundtable segment of This Week.

CLAIRE SHIPMAN: Don't you think that, I mean as George [Will] said, given that nobody knows the outcome, it seems as though the most important thing is speed here.

Will made the logical response.

Readers are forewarned to remove all food and fluids from their computer's proximity, for this is some truly hilarious stuff:

Doesn't it amaze you when some liberal media member actually claims that raising taxes is good for the economy, and uses the Clinton Era to prove his or her specious point?

True to the liberal motif, Sirota spoke fiscal and economic non sequiturs that only the deluded and/or uneducated could possibly agree with (video embedded right):

It appears being bestowed a Nobel Prize for economics doesn't improve one's economic acumen, for in the course of roughly 60 seconds Sunday, Paul Krugman said Franklin D. Roosevelt's decision to raise taxes in 1937 deepened the Depression, but it's okay to raise taxes 70-plus years later when the economy is in trouble.

What precipitated this bizarre, almost instantaneous economic flipflop on Sunday's "This Week" was ABC's George Will bringing up a little history by stating that net investment was negative throughout most of the 1930s because of the uncertainties about the economy and government's activist role during that period.

Nobel Laureate Krugman took issue with this premise (video embedded below the fold, relevant section at 6:57):