Former CNN anchor Eliot Spitzer is facing two libel lawsuits seeking a total of $90 million, Reuters reported Monday. The suits were filed Friday by two former employees of insurance brokerage firm Marsh & McLennan Cos. The plaintiffs argued that they were defamed in a critical Slate column by Spitzer, written one year ago on August 22.

The plaintiffs are William Gilman and Edward McNenney, who were not mentioned by name in Spitzer's piece about an insurance-rigging scandal. However, the complaint alleged that Spitzer defamed Gilman in his reporting on corrupt activity at Marsh, and in his accusation that "many employees" of the firm were sentenced to jail time – a claim the plaintiffs argued was false.

McGreevey, a Democrat, announced he was gay in 2004 while he was in office as governor of New Jersey. The announcement came as he resigned from office revealing that he had an gay affair with another man while married to his wife.

The "Hardball" host also took a swipe at Spitzer saying it was "ludicrous" for him to actually be talking about Congressman Anthony Weiner's (D-N.Y.) sex scandal (video follows with transcript and commentary):

Chrystia Freeland made a series of bizarre statements on MSNBC today that were overshadowed only by Anthony Weiner's contrite presser during which the Democratic congressman admitted to tweeting the infamous crotch photo and lying to cover it up.

Before the press conference, the Reuters editor-at-large quipped that the Twitter controversy showed that Eliot Spitzer, who resigned as New York governor in 2008 after being caught sleeping with prostitutes, "is a really classy guy."

CNN media analyst Howard Kurtz on Monday offered Bill Clinton, John Edwards, and Eliot Spitzer as examples of how the press don't give Democrats the benefit of the doubt when it comes to sex scandals.

Responding to questions about why the media have either ignored or taken sides on this weekend's brouhaha surrounding Congressman Anthony Weiner (D-N.Y.), Kurtz sent the following absurd message via Twitter:

As NewsBusters previously reported, CNN on Monday did a segment about recent sex scandals that conveniently ignored that of its own Eliot Spitzer.

On Sunday, "Reliable Sources" host Howard Kurtz took his network to task for this glaring omission (video follows with transcript and commentary):

Every hour but one of CNN's Tuesday evening news coverage featured at least a mention of former California governor Arnold Schwarzenegger's marital infidelity. Guess which anchor backed away from any mention of the scandal?

Schwarzenegger's revelation of his fathering a child with a mistress was one of the day's leading headlines, and merited a mention if not a segment on most every CNN news hour Tuesday. During its 5 p.m.-12 a.m. EDT coverage, CNN reported the story every hour except during the 8 p.m. EDT slot – the prime-time show In the Arena with Eliot Spitzer. Spitzer made no mention of the story.

CNN continued its rehabilitation of Eliot Spitzer's political career in leaving his name out of a lengthy list of recent political sex scandals Tuesday. As MediaBistro and my colleague Tom Blumer reported yesterday, the network shied away from disclosing the checkered past of one of its prime-time anchors.

In the wake of former California Gov. Arnold Schwarzenegger's revelations that he fathered a child with a mistress, CNN ran a segment during the 2 p.m. EDT hour covering recent political sex scandals. Correspondent Suzanne Malveaux mentioned six by name and CNN ran old news clips of even more – but failed to disclose that the current host of a CNN prime-time show was once embroiled in an infamous scandal.

UPDATE, May 18: NewsBusters commenter "dreamsincolor" has pointed out that CNN "somehow" forgot Democratic New York Congressman Eric Massa, who resigned in 2009 to avoid "an ethics investigation into alleged misconduct toward a male staff member."

The answer: yes it did.

What were the Parker Spitzer producers thinking?  If there was one guy you'd want to keep at a decent distance from a female co-host, it's Gov. Love Potion #9.  But tuning into the show, for the first time, tonight, I was shocked to see the way the pair had been virtually thrown into each other's laps.

A bit of inside TV baseball: I host a local TV show in my hometown. I'm always struck by how, when I'm sitting what feels quite close to a guest, we appear miles apart on camera.  So for Parker and Spitzer to appear so close on TV, they must literally be rubbing, well, elbows.

NY Daily News: 'Hooker-plagued' Spitzer 'Should Not Be Advising America' 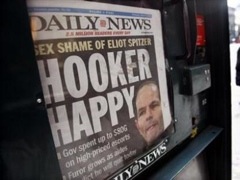 What makes Eliot Spitzer less qualified as a legitimate commentator on current events: his shameful exit from the New York governorship, or his sorry performance as governor?

In a column today, Kenneth Lovett, Albany Bureau Chief for the New York Daily News, argues for the latter. Spitzer, the headline states, "should not be advising America." The former governor is co-host, with Kathleen Parker, of the new CNN prime time show "Parker Spitzer", which premieres tonight.

While Spitzer is clearly not a model of personal integrity, Lovett insisted that the man was a complete political failure to boot. He rattled off a long list (for the short period of time in question) of political misdeeds by the former governor, ending the column with a scathing quote from a Democratic political consultant: "The fact this guy now is going to tell America how to function after what he did to New York is a disgrace."